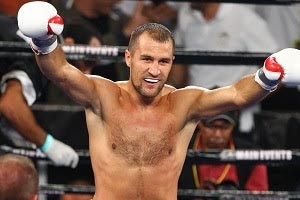 Caparello began the fight aggressively enough to score a 1st round knockdown of an off-balance Kovalev. Replays show that Caparello stepped on Kovalev’s foot while landing the punch that dropped him. Kovalev finished the round strongly despite Caparello successfully landing his left hand multiple times in the round.

Kovalev wasted little time getting started in the second round and it paid off. A right hand to the body, that barely seemed to graze Caparello sent the challenger down in pain early in the second round. Shortly after, Kovalev backed Caparello against the ropes where he followed up his assault, dropping Caparrelo twice more before referee Sparkle Lee called for a stoppage at 1:47 of the round.

“After the punch to the liver, I felt he was done,” Kovalev told Max Kellerman. “I finished the job.”

Bernard Hopkins was brought ringside and asked what he saw in Kovalev as an opponent.

November 8 will present an interesting matchup between these two warriors. Stay tuned for analysis and predictions on that unification bout.

Dmitry Mikhaylenko remained unbeaten by dominating Sechew Powell over eight rounds. Scores were 80-72, 79-73 and 78-74. The Fight Journal scored it 80-72 for Mikhaylenko.

In possibly the most entertaining fight of the night (outside of a scuffle between fans outside of Revel’s Ovation Arena), Adam Kownacki scored a fifth round stopped of Charles Ellis. Each fighter threw and landed big shots in this battle of limited big men. Both guys were extremely tired, especially over the last two rounds. Fans looked intently as everyone had the feeling that the fight would end on the next big shot. That big shot was landed by Kownacki as the referee stepped in to call the fight. This is a matchup I’m sure fans would like to see take place again.