Live on PPV, Saturday, May 6, from Las Vegas

NEW YORK, NY (May 1, 2017) – Flipps Media has announced that it will stream the May 6th super fight between Saul “Canelo” Alvarez and Julio Cesar “JC” Chavez, Jr., live on pay per view in the United States and Canada, starting at 9 p.m. ET / 6 p.m. PT, from sold-out T-Mobile Arena in Las Vegas, Nevada.

“Canelo vs. Chavez, Jr.”, promoted by Golden Boy Promotions, is available to watch in HD in English and Spanish on the Canelo-Chavez.com website for a suggested retail price of $69.99.

Boxing fans can watch the entire PPV card, headlined by the Alvarez-Chavez, Jr. 12-round fight being contested at a catch-weight of 164 ½ pounds, live at http://www.canelo-chavez.com from any computer or mobile device.  All supporting events including the Canelo vs. Chavez Jr. press conference, weigh-in, and undercard fights will be streamed live globally free on the Canelo-Chavez.com website, the FITE.tv web site and on the FITE app available for iOS and Android devices.

“We’re thrilled to host the biggest boxing event of the year, Canelo vs. Chavez Jr.,” said Flipps Media Co-founder and CEO, Kosta Jordanov.  “With this amazing PPV card, the English and Spanish HD feeds, and top boxing experts in the live chat, this will be an amazing night for all fans!” 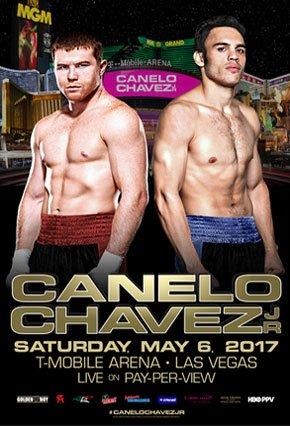 The “Canelo vs. Chavez, Jr.” PPV card is loaded with exciting knockout artists, with eight of the main card fighters having a combined record of 272-18-2 with 194 knockouts, highlighted by the Alvarez-Chavez, Jr. cumulative record of 98-3-2 with 66 stoppages.

Alvarez vs. Chavez, Jr. is one of the most anticipated fights, easily a Fight of the Year candidate, featuring two of the highest-profile Mexican warriors, fighting on Cinco de Mayo weekend.

Twenty-six year-old Alvarez (40-1-1, 34 KOs) is the reigning World Boxing Organization (WBO) world junior middleweight and The Ring magazine middleweight champion. The wildly popular fighter is moving up in weight to fight Chavez, Jr., who has dropped back down from light heavyweight.

In his first pro loss, Chavez Jr. lost a 12-round decision to Sergio Gabriel Martinez, who survived a final round knockdown as Chavez tried to finish off the famed Argentinian.

The 10-round co-feature also has explosive potential as middleweights David Lemieux (37-3, 33 KOs) and Marcos “Dorado” Reyes (35-4, 26 KOs) have a higher combined knockout percentage than Alvarez-Chavez. Jr.

Lemieux, 28, is a highly skilledfighter from Montreal and a former International Boxing Federation (IBF) middleweight world champion.   He is 12-1 in his last 13 fights, since his loss to unified world middleweight champion Gennady “GGG” Golovkin.

At stake for Lemieux is a possible throw-down with “Canelo” later this year.  The Canadian slugger has quality victories over Curtis Stevens, Hassan N’Dam N’Jikam, Gabe Rosado, Fernando Guerrero.  Lemieux is currently world rated among the top seven middleweights by all four major sanctioning bodies – WBO & WBC #4, WBA #5 and IBF #7 — as well as No. 3 by (independent) The Ring.

Reyes, fighting out of Chihuahua, Mexico, went thedistance in 2015 with Chavez, Jr., in a loss by way of 10-round unanimous decision.  Reyes is a former WBC FECOMBOX middleweight and Mexican light middleweight champion.

Taylor was a decorated American amateur boxer who owned a 186-26 amateur record, including three gold-medal performances in the National PAL Championships.  The 26-year-old has never been stopped as a professional, taking world champions Adrian Broner and Chris Algieri the distance.  Taylor has defeated Karim Mayfield, Victor Manuel Cayo and Raymond Serrano, among the more notables.

Avila, rated No. 10 by the WBC, is a live underdog having defeated 28-6 Jose Ramirez, 24-7 Prosper Ankrah and 23-6 Rene Alvarado in his last three fights.

The event is available for pre-order now at www.Canelo-Chavez.com