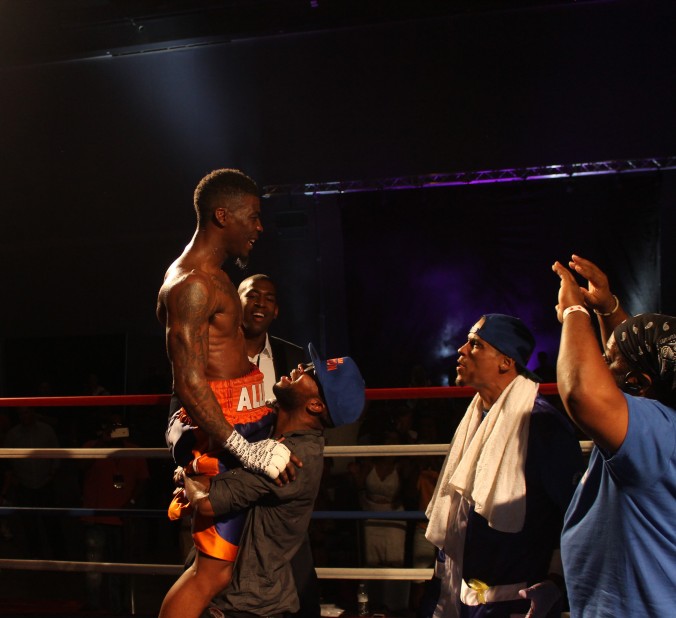 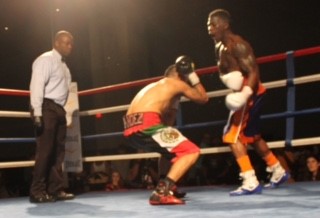 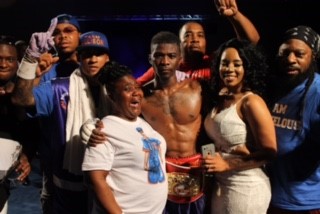 Raleigh, NC (May 21) – Many ringside observers believed Maynard Allison would walk over Eric Hernandez in their 135 pound battle for the vacant UBF All-American title.  Instead, the previously unbeaten Hernandez (9-1 5 KO’s) forced the best out of Allison, and Allison responded with a well deserved UD win for his first title in a show stealing performance.

Allison and Hernandez exchanged leather from the opening bell.  Allison used superior boxing skills to repeatedly land a good, crisp jab and short combinations to control the majority of round one, but Hernandez methodically worked inside Allison’s jab, and a firefight ensued.

Round two was much the same, but Hernandez landed a big left hook to Allison’s body followed by a right hand to the head.  Allison woke up and all hell broke loose.

In round three, Allison came out winging and landing big punches on the stalking Hernandez.  While Hernandez was being rocked, he kept coming forward forcing Allison into what might be the round of the year in North Carolina boxing. Allison planted his feet and Hernandez tried to put his head in the middle of Allison’s chest.  Neither man gave ground as they blasted each other with soul stealing lefts and rights, body shots, and knee bending head shots.  After the fight, Allison acknowledged he could have easily out boxed Hernandez, but Allison quickly quipped, “I needed to give the fans something, so I stood in and fought.”

Round four was Hernandez’s best round, and the only one he won on the judge’s scorecards.  Hernandez jumped in and attacked Allison’s body.  Hernandez would keep pushing and force a visibly exhausted Allison into the corner where Hernandez delivered body shot after body shot which forced the very defensive and tired Allison to double over.  Trapped in the corner, Allison tried to protect his body, but Hernandez started landing thudding shots to Allison’s head.  Just when Allison looked done, he stood flat footed and fired off a barrage of punches that forced Hernandez to stumble backward.  Allison was back on the attack at the end of round four.

Rounds five, six, and seven saw Allison control the early stages of each round, Hernandez would deliver punishing body work in the middle of the round, but Allison would check hook and throw a right hand counter to control the ring and a desperate Hernandez.

Allison came out fresh for the final round.  He bounced on his toes and repeatedly landed a jab, over hand right, and a left to Hernandez’s body.  Hernandez was still coming, but Allison’s shots were stopping Hernandez in his tracks.  The last minute of the eighth and final round were pure guts as the two warriors stood toe to toe talking to each other and exchanging shot after shot as the crowd stood on their feet and the final bell rang.

In the end, the judges scored the fight 79-73 all for the winner and new 135 pound UBF All-American champion Mr. Marvelous Maynard Allison.

While coaches Lando and Massey would have preferred Allison keep Hernandez in the middle of the ring, both recognized the heart and will Allison displayed.  “Maynard dug deep and really established himself to win that belt,” said Lando.  Massey would add, “That is the best I’ve ever seen Maynard.  He earned the title.  He worked for every piece of that belt.  Coach Lando has him right.”

Maynard Allison earned a title and improved his record to 8-1 (5 KO’s), and is scheduled to return to the ring as the main event June 22 on Top Catz Boxing’s Durham Fight Night card.