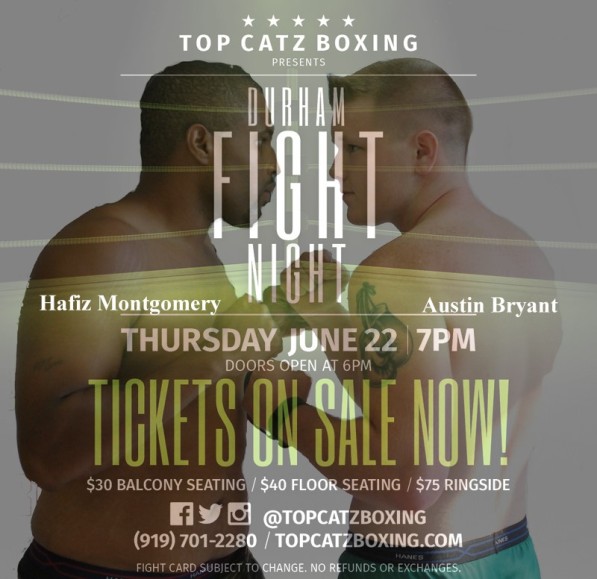 Durham, NC (May 30) – Austin Bryant and Hafiz Montgomery were scheduled to meet in Wilson, NC last year in a battle of up and coming Cruiserweights.  What a difference a year makes, because this time, a title will be on the line as Austin Bryant 4-0 (4 KO’s) and Hafiz Montgomery 3-1 (2 KO’s) battle for the vacant WBF North American Regional Title on  Top Catz Boxing’s June 22 Durham Fight Night card.

Bryant, who is coming off of a highlight reel stoppage of previously unbeaten Lawrence Gabriel, is excited to have his first shot at a professional belt, “I want to become a world champion like Canelo, and this is my first step.”

Bryant is anxious to settle unfinished business with Montgomery. Bryant and Montgomery were scheduled to battle four rounds at the Wilson recreation center last Septmeber, but some issues forced a postponement of the entire card.

Fast forward one year, and the “Babyface Assassin” welcomes the moment:  “Hafiz was pretty cocky last time. I only had two fights, and he had three with a loss at the time, but he was talking and telling everyone how he was going to beat me.  Well, he has his chance, and I can get my first title.  Good Luck!”

Montgomery of Tom’s River, NJ has fought once since the postponement of his match-up with Bryant. Montgomery scored an impressive TKO of previously unbeaten Julian Poole at Harrah’s Casino in Chester, PA.

Bryant vs. Montgomery is the co-Main event on a card headlined by newly crowned UBF All-American Champion Maynard Allison.

For more information about Durham Fight Night – “A Night of North Carolina’s Rising Stars” follow Top Catz Boxing on Facebook, Twitter, and Instagram at @TOPCATZBOXING. Use the hashtag #DFN to follow, see, and contribute to exciting news and information on Social Media. You can also visit www.topcatzboxing.com