Atlantic City, New Jersey (August 5, 2017)–Derrick Webster continued his quest towards a world title shot by taking out Lamar Harris in a scheduled eight-round super middleweight bout that headlined a six-bout card at The Claridge Hotel in Atlantic City.

The show was promoted by Mis Downing Promotions in association with Square Ring Promotions.
Webster dropped Harris at the end of round one as he landed a perfect straight left hand.  After that it was a matter of when Webster would end the night., as Harris was hurt, but came out to endure 28 seconds of pounding before the bout was stopped.

“We have been working hard, and now I am looking for a title.  I want George Groves,” said Webster.

“I knew after I dropped him after the first round, the fight would be over soon thereafter.  I know Groves is in the tournament, so why not Badou Jack.  I would love to fight him.”

Prince Badi Ajamu shook eight years of ring rust to pound out an eight-round uannimous decision over Edgar Perez in a cruiserweight bout. Ajamu, 191.4 lbs of Camden, NJ won by scores of 80-72 twice and 79-73 and is now 28-3-1. Perez, 190 lbs of Chicago is 7-22. “It was a good fight. I give myself a C. Everything is about knockouts,” said Ajamu. “I broke him down mentally. You could see that I had a lot of ring rust, as I don’t miss as many shots as I did, but I started to feel good around the 5th round.” 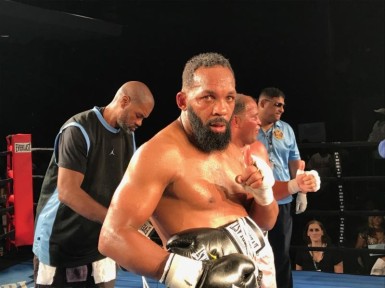 Ajamu has been linked to a rematch with Roy Jones, Jr. who beat Ajamu back in 2006.

Jones was ringside and believes that the fight could happen in November.

“He did more than enough to earn the rematch tonight.  Now it is just a matter of making it work financially and all by getting sponsorship’s and such, and that fight can happen, said Jones.

World-ranked heavyweight Zhang Zhilei hammered out Nick Guivas in round one of their scheduled ten-round bout. Zhilei dropped Guivas in the first frame with a hard six-punch combination in the corner. Seconds later, Zhilei finsihed off the fight with a crushing four-punch combination on the ropes and the bout was stopped at 2:43.

Mike Hilton went the distance for the first time, but still came out with the six-round unanimous decision over Willis Lockett in a cruiserweight bout.

Shaddy Gamhour stopped Jessie Singletary in first round of their scheduled four round middleweight bout. 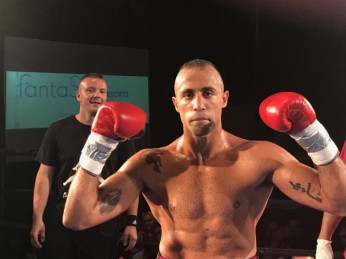 Gamhour, who is trained by Roy Jones, Jr. landed a hard right hand that sent Singletary to the canvas and the bout was stopped at 1:43.

Taylor jumped on McLaughlin and landed a vicious combination in the corner that sent McLaughlin hard to the canvas and the was stopped immediately.

Mis Downing Promotions will be back at the Claridge on Saturday, November 4th.