LIVE on ESPN and Streaming on the ESPN App 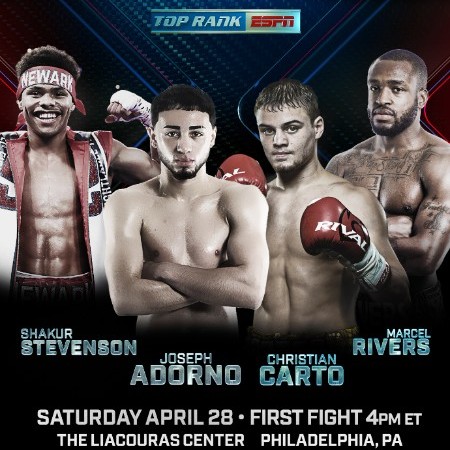 PHILADELPHIA (April 4, 2018) —  A pair of 2016 Olympic medalists — USA silver medalist Shakur Stevenson and Brazilian gold medalist Robson Conceicao — will see action on the undercard of the WBO junior featherweight title fight between defending champion Jessie Magdaleno and No. 1 contender Isaac Dogboe on April 28 at The Liacouras Center on the campus of Temple University.

Magdaleno-Dogboe, Jennings-Dawejko and Hart-Nicholson will be televised LIVE on ESPN and ESPN Deportes, and streaming on the ESPN App at 7 p.m. ET. Undercard bouts will stream on the ESPN App beginning at 4 p.m. ET.

Promoted by Top Rank, in association with Peltz Boxing, tickets, priced at $100 (ringside), $65 and $35, are ON SALE NOW and can be purchased at The Liacouras Center Box Office and www.liacourascenter.com, or by calling Peltz Boxing at 215-765-0922.

Stevenson (5-0, 2 KOs), from Newark, N.J., will have his hometown fans in the crowd when he makes his second appearance of 2018. His opponent in the scheduled eight-round featherweight bout is undefeated Roxberg Riley (12-0, 6 KOs) of Dallas, Ga. Stevenson is coming off a shutout unanimous decision victory over Juan Tapia on Feb. 16 in Reno, Nev.

“I’m excited to head back to the East Coast for my second fight of the year,” Stevenson said. “I have family in Philadelphia and it’s close to my hometown, so I know I will have a lot of support on April 28. I’m going to put on a great show for them and everyone at The Liacouras Center. It’s important to me to stay busy, so I’m ready to get right back at it after my first eight-rounder in February.”

Conceicao (6-0, 4 KOs) will fight Alejandro Torres (6-1, 3 KOs) of Calgary, Canada, in an eight-round super featherweight bout. In his last bout, on Feb. 16 in Reno, Nev., Conceicao saw his four-fight knockout streak come to an end, but he still managed to outpoint previously undefeated Ignacio Holguin by unanimous decision.

“I’m always looking for the knockout, and this time will be no different,” Conceicao said. “Fans can expect an aggressive and intelligent Robson in the ring. I’m hungry, and I want to bring the world championship belt to Brazil in 2018.”

Adorno (6-0, 6 KOs), from Allentown, Pa., has scored five first-round knockouts, most recently stopping Ivan de la Madrid in the opening round on the St. Patrick’s Day card at the Hulu Theater at Madison Square Garden. He will face Jorge Padron (3-1, 3 KOs) of Agua Prieta, Mexico, in a six-round super featherweight bout.

“I am pumped to be on a card with such great prospects, including myself,” Adorno said. “Most importantly, it’s a short drive from Allentown, and I will have my family and friends there cheering me on.”

Carto (14-0, 11 KOs) is no stranger to fighting in the City of Brotherly Love, having boxed there 11 times as a pro. He will fight in an eight-round bantamweight bout against an opponent to be determined. Carto has Philadelphia boxing in his blood. His grandfather, Frankie Carto, was a lightweight contender in the 1940s, while his great uncle, Nunzio, also fought as a Philadelphia-based lightweight in the 1940s. His other great uncle, Joe Carto, turned pro in Philadelphia back in 1932.

“I’m very excited to be fighting April 28 at The Liacouras Center with so many talented fighters,” Carto said.  “It means a lot to be on such a strong card in the heart of the city.”

“This is the hurt business, and I’m definitely going for the knockout,” Cruz said. “I just don’t want a knockout, I want to get one in spectacular fashion.”

Philadelphia’s Marcel Rivers (4-0, 3 KOs) will see action in a four-round welterweight bout. Rivers is a union foreman for Philadelphia Gas Works, often training at 4 a.m. before he begins his shift. This will be the fourth time Rivers has fought in Philadelphia as a professional.