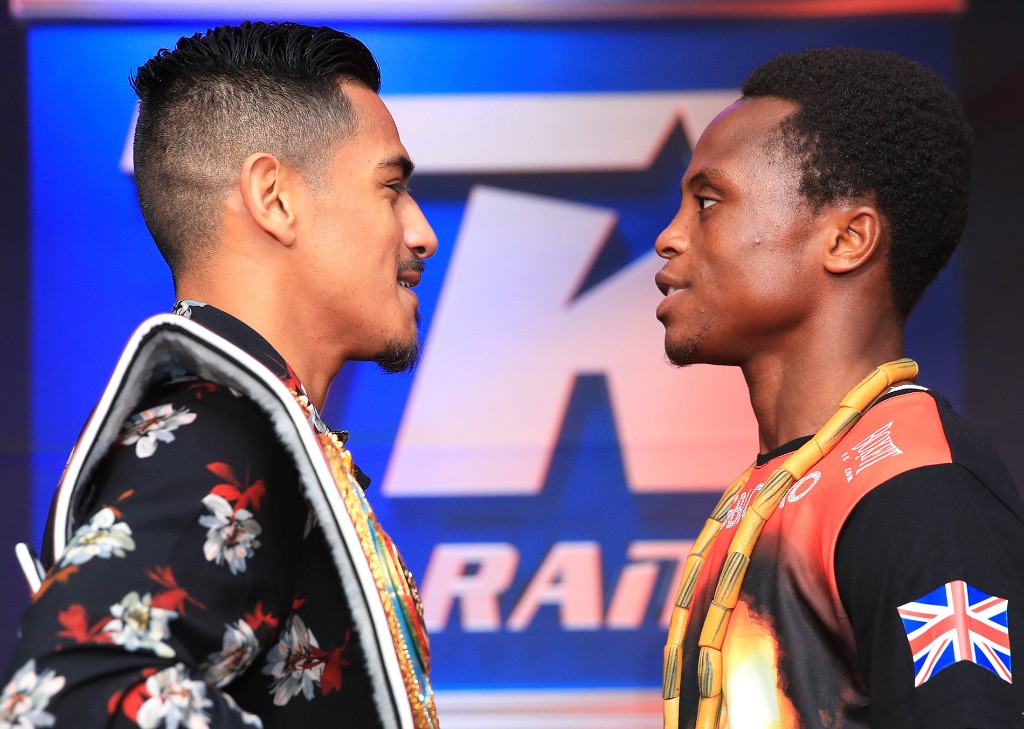 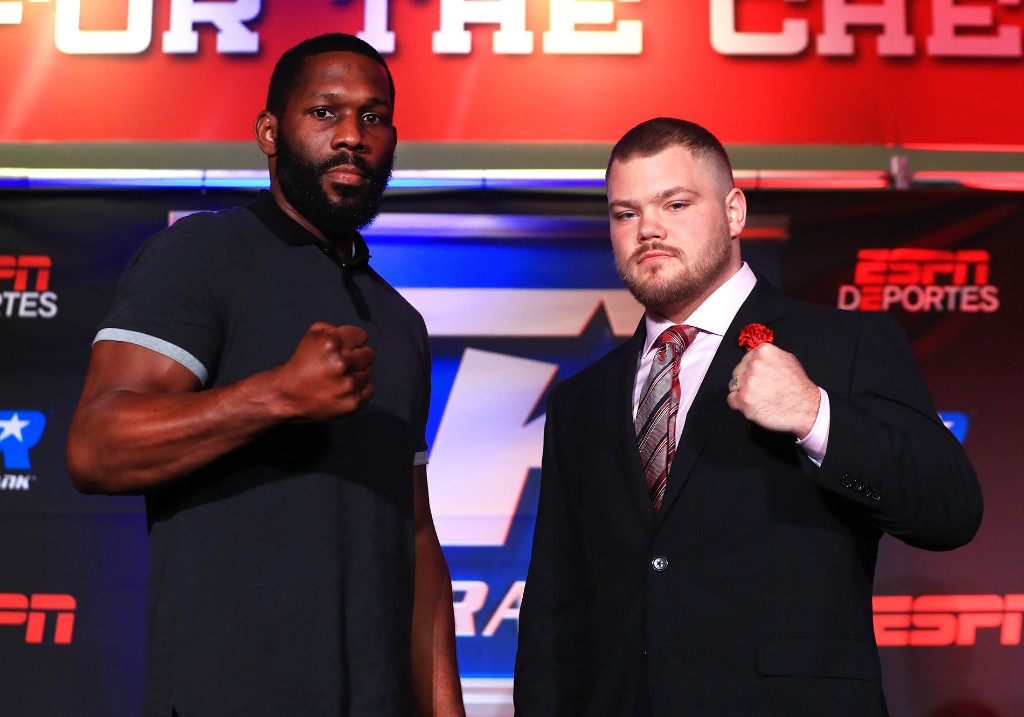 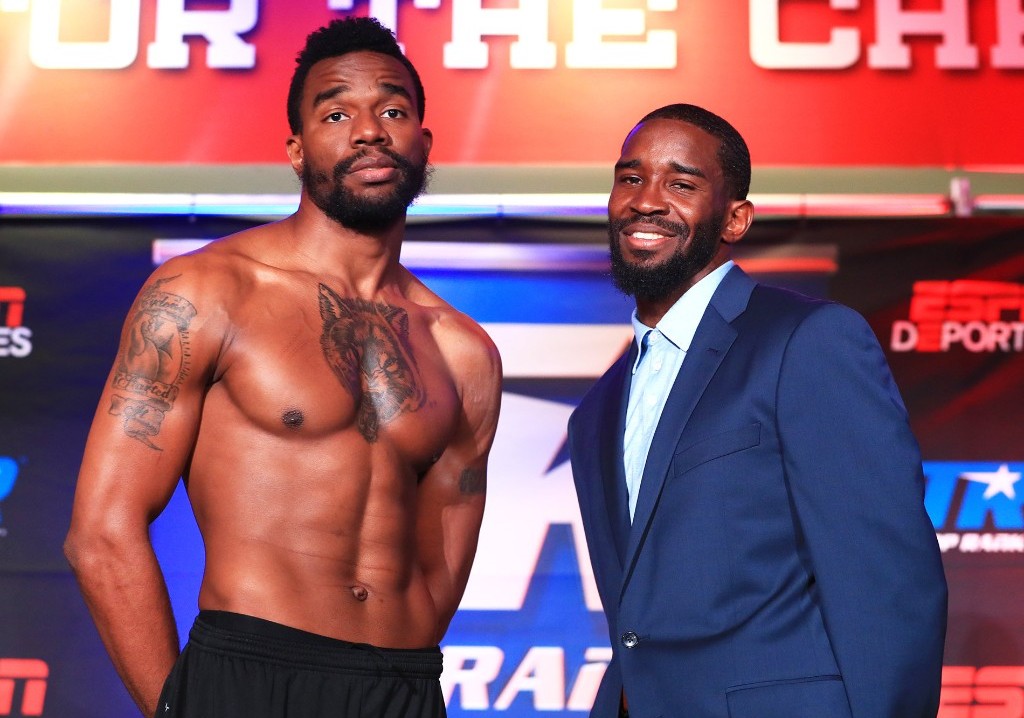 PHILADELPHIA (April 26, 2018) — The verbal haymakers were flying Thursday afternoon as World Boxing Organization (WBO) junior featherweight champion Jessie Magdaleno and No. 1 contender Isaac Dogboe faced off at the final press conference for their world championship main event, Saturday at The Liacouras Center.Magdaleno vs. Dogboe headlines a card with plenty of Philadelphia flavor. Amateur rivals Bryant ‘By-By’ Jennings and Joey Dawejko square off in a 10-round bout to decide Philadelphia heavyweight supremacy, while Jesse ‘Hollywood’ Hart, son of Philadelphia middleweight legend Eugene ‘Cyclone’ Hart, continues his march to another super middleweight title shot against Demond Nicholson in the 10-round co-feature.

Magdaleno-Dogboe, Jennings-Dawejko, and Hart-Nicholson will be televised LIVE on ESPN and stream in English and Spanish on the ESPN App at 7 p.m. ET. Undercard bouts will stream live on ESPN+, available on the ESPN App, beginning at 4 p.m. ET. ESPN Deportes will air the fight at 10 p.m. ET.

Dogboe heated things up when he called Magdaleno “the worst world champion ever” before questioning whether he could make the weight.

“You look worse than me,” Magdaleno responded. “You look like an alien.”

Dogboe mentioned that Magdaleno had blocked him on Facebook when the fight was announced.

“I guess I send shivers into people’s spines,” Dogboe said.

“I can’t beat him any uglier than he already is,” Magdaleno said. “He’s dog ugly. Come Saturday, we’re going to give him the name that he deserves…. the ugly Dogboe.”

Then, things got really personal.

“When I knock you out cold, that’s when I’m going to feel really sorry for your son, your little son, because he’s going to be crying seeing his father {knocked out} cold,” Dogboe said.

“Don’t bring my son into this!” Magdaleno said. “I’ll knock your ass out right now. I’ll slap the sh*t out of you.”

Said Dogboe: “Save it for Saturday.”

Promoted by Top Rank, in association with Peltz Boxing, tickets, priced at $100, $65 and $35, are ON SALE NOW and can be purchased at The Liacouras Center Box Office and www.liacourascenter.com, or by calling Peltz Boxing at 215-765-0922.

The undercard will feature some of the sport’s most dynamic young talents, including 2016 U.S. Olympic silver medalist Shakur Stevenson (5-0, 2 KOs), who will be taking on Patrick Riley in an eight-round featherweight bout. This is the second fight of 2018 for Stevenson, who is coming off a shutout unanimous decision victory over Juan Tapia on Feb. 16 in Reno, Nev.

Philadelphia native Christian Carto (14-0, 11 KOs) will face Edwin Rodriguez of Ponce, Puerto Rico, in an eight-round bantamweight bout. Carto is a Philadelphia legacy, as his grandfather and multiple great uncles fought in the paid ranks. This will be his 12th appearance in his hometown as a pro.

Knockout artist Joseph Adorno (6-0, 6 KOs), who has five first-round knockouts on his ledger, will fight Jorge Padron in a six-round super featherweight bout.

This is what the fighters had to say.

“We’re ready for Saturday night. I know this is coming. I hope he’s ready because I came ready. I don’t want no excuses. He’s going to get the ass whooping he deserves. I’ve been waiting to fight him. All that trash talk on social media, I hope he puts it up on Saturday night because I’m ready. I’m ready to give him what he deserves.”

“I {trained} alongside Oscar Valdez and a couple other stable teammates. Just being there with them pushed me harder and harder”

“Each fight, I get stronger and stronger, mentally and physically.”

“I can sense fear in Jessie Magdaleno already. He can say whatever he wants to say, but when he gets in the ring, he’s really going to find out.”

“This camp, they started all this social media {stuff}. Look, you can’t go into the playground to play with the big boys, and later on, you go crying about it. When you want to do something, you have to come prepared.”

“I guess now he finally his balls to step up to the plate, accepting this fight. i hope come Saturday night he’s prepared and doesn’t complain about anything.”

“In boxing, we always understand our duties. Our goal is to go out and win the fight.  Once the fight is made, once you agree, once you sign that paper, then you know exactly what you have to do. I only have to worry about my responsibilities.”

“I fought at Madison Square Garden {against Wladimir Klitschko} in front of 17,000 people, but I still don’t remember it. I still never lived it. My homies can tell you right now. The whole crowd was cheering… I’m like, ‘Damn, I wish I was there! I was in it, but I wasn’t there because I had my mind so focused on what I needed to do focus on. So I don’t add that pressure until it’s over.”

“I’m a great boxer too. I can box. I don’t have to knock you out.  Right now, I’m in the shape to box every round hard and do what I have to do.”

“They got me in absolutely perfect condition. It’s all about me now. Its about my mind. It’s about my attitude going into that fight.”

“Demond Nicholson is a good fighter. I can’t take nothing away from him. But I want to perform, be great. You have good fighters and you have great fighters. I’ve been getting ready in the gym.”

“We’re working on a lot of mental things with me. I can’t get away from my game plan. Last time I fought here (against Dashon Johnson), I got caught up in that crowd. Sometimes I want to show them that I have enough heart and that I can be in a knockdown, drag-out fight. I may be pushed to that point again, and I want people to know that the heart is there.”

“What can I say? We know who the main event really is. I don’t want to get ahead of myself, but I think the show is great. Bryant Jennings and Joey Dawejko is a great match-up, but a lot of people want to see Jesse Hart. They want to see how I grew from the {Gilberto} Ramirez fight.”

“This Saturday, I’m going to put on an amazing show. This dude should not make it out of eight rounds.”

“I’m excited to have a lot of my family and friends in the crowd. I know they’re going to be supporting me.”