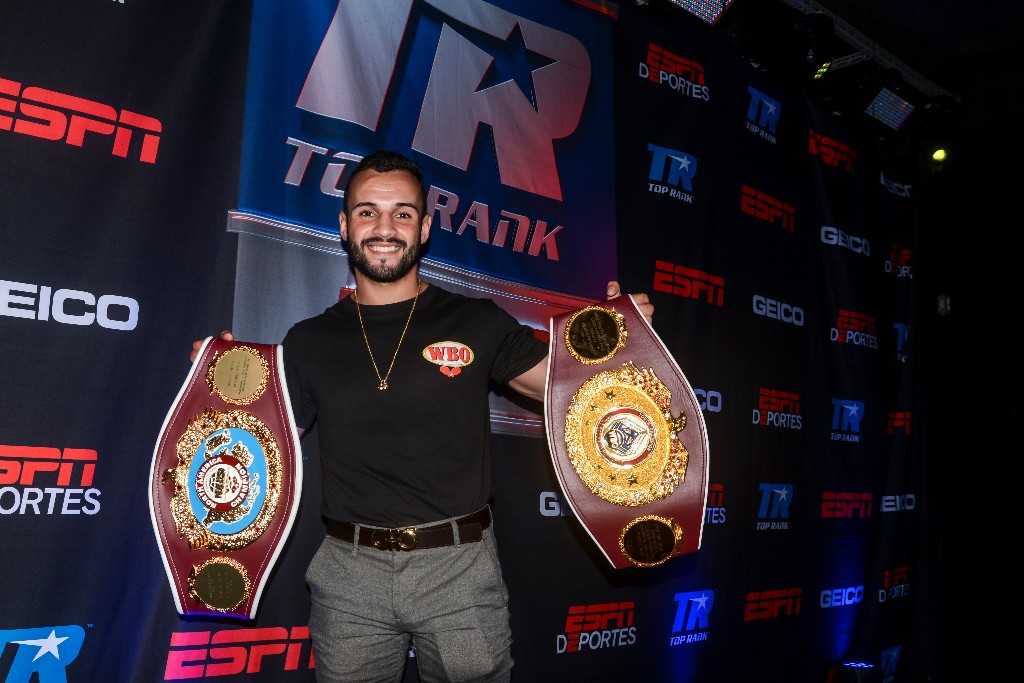 SAN JUAN, P.R. (June 21, 2018) — Total focus. Undefeated Puerto Rican contender Christopher “Pitufo” Diaz has only one goal on his mind: become a world champion. During a press conference held on Thursday afternoon at ‘The Island of Enchantment’, Díaz guaranteed that on July 28 he will leave the Kissimmee Civic Center as world champion.

On that night, in front of the fans of the city called “Little Puerto Rico” in the state of Florida, Díaz will compete for the vacant World Boxing Organization (WBO) Junior Lightweight title against Japan’s Masayuki Ito. In the co-feature, undefeated Dominican welterweight Carlos “Caballo Bronco” Adames will face Artemio Reyes of San Bernardino, California.

Diaz-Ito and Adames-Reyes will stream live and exclusively in the United States at 9:30 ET on ESPN+ — the recently-launched multi-sport, direct-to-consumer subscription streaming service from The Walt Disney Company’s Direct-to-Consumer & International segment in conjunction with ESPN. Undercard bouts will stream live on ESPN+ beginning at 6:30 p.m. ET.  ESPN+ is available to all fans on the ESPN App and ESPN.com.

This is what Diaz and his trainer Raul ‘Chino’ Rivas had to say during the press conference.

On his World Title Opportunity

“We are only one step away, there are only five weeks left. I have worked for 15 years of my life for this moment. I have a lot of focus, a lot of discipline and I have an immense desire to be someone in life.”

“In this fight, there are no excuses, this is win or win fight for me. I have prepared myself throughout my career for this moment, the time has come and now it is a matter of performing and knowing how to do things inside the ring. If I make a mistake in the ring, my family will pay for it and I will not let that happen.”

On the Motivation to Become a World Champion

“I have the motivation of my daughter, my twins who are on their way, my wife, my mother, my brothers, I have a family that follows me wherever I go, I leave it all in the ring for them. Everything I do is for them.”

“The training camp has been excellent, the sparring sessions are very important for this fight and we have the sparring partners that are perfect for Christopher. On July 28 we will be ready and in excellent condition.”

Diaz (23-0, 15 KOs), from Barranquitas, Puerto Rico, is entering his first world title match riding a four-bout knockout streak. The WBO’s No. 1 junior lightweight contender, Diazwon the vacant NABO junior lightweight title last December with a third-round knockout of Bryant Cruz, knocking Cruz down five times en route to the stoppage. In his last bout,March 17 on the Jose Ramirez-Amir Imam undercard at The Hulu Theater at Madison Square Garden, Diaz defeated Braulio Rodriguez via fourth-round TKO to earn the shot at the world title. For Diaz, this world title opportunity is beacon of hope, as his home and most of his possessions were destroyed when Hurricane Maria ravaged Puerto Rico last year.

Ito (23-1-1, 12 KOs), from Tokyo, is the WBO’s No. 2 junior lightweight contender. He has won seven consecutive bouts since the lone defeat of his career, a 10-round majority decision to then-undefeated Rikki Naito in February 2015. Ito, who has fought all of his professional bouts in Japan, has won four of his past five bouts via knockout, including a ninth-round stoppage of Lorenzo Villanueva in April of last year. In his last bout, on March 3 at Korakuen Hall in Tokyo, Ito stopped Vergil Puton in the ninth round.

Promoted by Top Rank, in association with All Star Boxing and Teiken Promotions, tickets to this world championship are now on sale.  Priced at $100 (red carpet ringside), $50 (lower bowl), and $30 (general admission), tickets may be purchased at the Kissimmee Civic Center box office, online at ticketerapr.com, or charge by phone at (787) 305-3600.

ESPN+ is the first-ever multi-sport, direct-to-consumer subscription streaming service from The Walt Disney Company’s Direct-to-Consumer & International segment in conjunction with ESPN.  ESPN+ offers fans two exclusive, original boxing programs The Boxing Beat with Dan Rafael (Tuesdays, weekly) and In This Corner (twice monthly). In addition to boxing content, fans can watch thousands of additional live events, on-demand content and original programming not available on ESPN’s linear TV or digital networks. This includes hundreds of MLB, NHL and MLS games, Grand Slam tennis, Top Rank boxing, PGA Tour golf, college sports, international rugby, cricket, the full library of ESPN Films (including 30 for 30) and more. Fans can subscribe to ESPN+ for just $4.99 a month (or $49.99 per year) and cancel at any time.