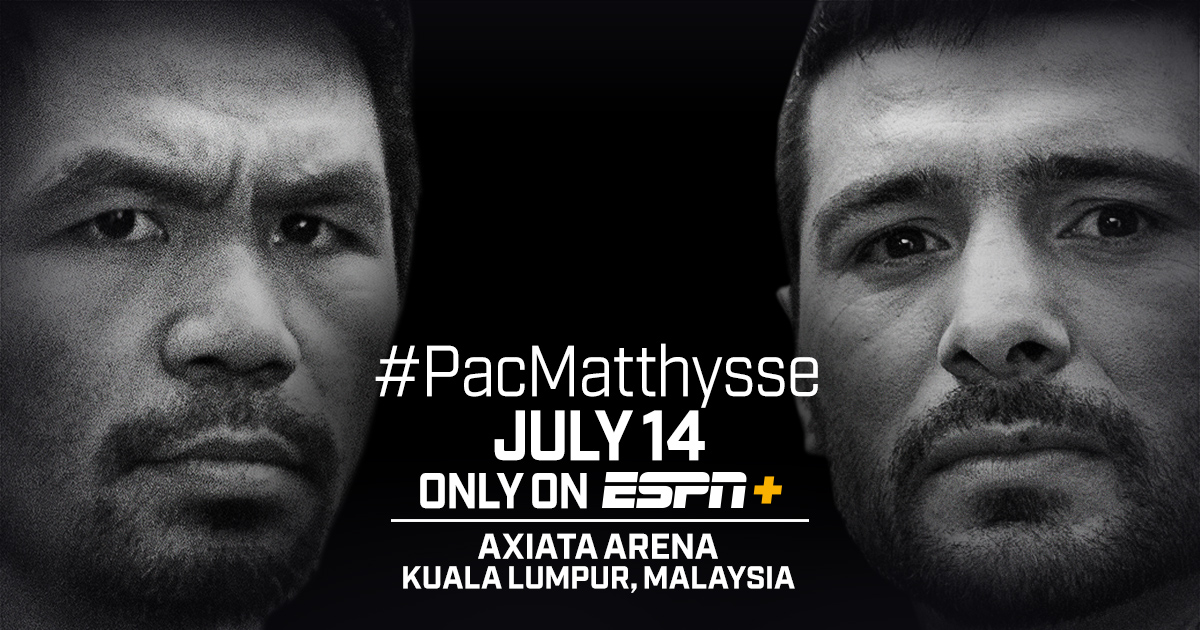 (JULY 7, 2018) ‑ The next chapter in the storied career of former eight-division world champion and future first-ballot Hall of Famer, Manny “Pacman” Pacquiao, will stream live and exclusively in the United States on Saturday, July 14 at 9 p.m. ET on ESPN+ — the recently-launched multi-sport, direct-to-consumer subscription streaming service from The Walt Disney Company’s Direct-to-Consumer & International segment in conjunction with ESPN. This will be Pacquiao’s first fight since headlining cable television’s highest-rated and most-watched boxing telecast since 2006, when he fought Jeff Horn in July of 2017 on ESPN.

Pacquiao will challenge Lucas “La Maquina” Matthysse for the WBA welterweight title at the Axiata Arena in Kuala Lumpur, Malaysia. In addition, in the world championship co-feature, Filipino power puncher Jhack Tepora (21-0, 16 KOs) will face Edivaldo “Indio” Ortega (26-1-1, 12 KOs) for the vacant WBA featherweight title. Pacquiao and Matthysse are expected to enter the ring at roughly 11:30 p.m. ET. ESPN+ is available to all fans on the ESPN App and ESPN.com.

Pacquiao-Matthysse will cap a full day of boxing on the ESPN family of networks, as Regis “Rougarou” Prograis will defend the WBC Diamond super lightweight title against Juan Jose Velasco, and lightweight sensation Teofimo Lopez will face William Silva, live on ESPN and ESPN Deportes at 7 p.m. ET and via streaming on the ESPN App from the Lakefront Arena in New Orleans. Undercard action from New Orleans will stream live on ESPN+ starting at 4:30 p.m. ET.

“I am very happy that all of my fans in America will have a chance to watch my next fight on ESPN+, and I am looking forward to putting on a show,” Pacquiao said. “Matthysse is a great opponent. I am training with all of my heart because I want to be champion again.”

“This extraordinary event only affirms ESPN’s commitment to providing boxing fans with the biggest and best fights in the sport,” said Bob Arum, Top Rank’s founder and CEO. “Manny Pacquiao is one of the greatest champions in boxing history, and his fight against Matthysse promises to be a sensational one.”

“This matchup is a perfect example of the world-class caliber of events we envisioned for ESPN+ when we announced our agreement with Top Rank,” said Burke Magnus, ESPN Executive Vice President of Programming and Scheduling. “Pacquiao vs. Matthysse, which will stream live and exclusively on ESPN+, shows the commitment we have to delivering fans the best of boxing year-round on our direct-to-consumer platform.”

Matthysse (39-4, 36 KOs) won the vacant WBA welterweight title Jan. 27 in Los Angeles with an eighth-round knockout over Thailand’s Tewa Kiram. One of boxing’s best punchers, pound-for-pound, he is an all-action brawler who has participated in multiple Fight of the Year contenders, including an 11th-round knockout win over John Molina in 2014 and a 12-round majority decision victory over Ruslan Provodnikov in 2015. Matthysse has won two straight since a 10th-round knockout loss to then-undefeated Viktor Postol on Oct. 3, 2015.

The ESPN+ lineup includes 18 exclusive, live Top Rank events per year, dozens of fights from other Top Rank undercards, an unmatched library of the greatest fights in boxing history, and two exclusive, original boxing programs: The Boxing Beat with Dan Rafael (Tuesdays) and In This Corner (twice monthly).

It also features hundreds of MLB, NHL and MLS games, Grand Slam tennis, PGA TOUR golf, college sports, international rugby, cricket, the full library of ESPN Films (including 30 for 30) and more. Fans can subscribe to ESPN+ for just $4.99 a month (or $49.99 per year) and cancel at any time.

ESPN+ is an integrated part of the completely redesigned ESPN App. Already the leading sports app, the new ESPN App is the premier all-in-one digital sports platform for fans and is a showcase of the company’s culture of innovation. With a richer, increasingly more personalized experience, the new ESPN App curates all of ESPN’s incredible content into an experience unique to each fan’s individual tastes. ESPN+ is also available through ESPN.com.