JOE DEGUARDIA’S STAR BOXING is pleased to announce that if you were unable to attend the June 30th, SLUGFEST at the SUN, live from Mohegan Sun, you will be able to watch it via tape-delay, airing on NESN (New England Sports Network) THIS THURSDAY, JULY 19TH at 8:00 PM ET.

June 30th’s, Star Boxing’s SLUGFEST at the SUN, from Mohegan Sun, will also re-air on NESN on:

The broadcast will open with a 6-round jr. welterweight clash, and one of the most entertaining fights of the night, between undefeated New England Prospect, and 2017 Star Boxing Prospect of the Year, “ACTION” ANTHONY LAUREANO as he took on Haymarket, Virginia veteran JUAN de la cruz RODRIGUEZ. Both fighters put on extremely gutsy performances, that you will not want to miss.

In a 4-round tilt, South Boston’s own, Union railroad laborer, JOE FARINA showed the true work ethic of a fighting man during his back and forth battle with, STEVE MOORE of New Jersey.

In the co-feature bout, you will see KALI “KO MEQUINONOAG” REIS return home to Mohegan Sun after a brilliant power punching performance against undisputed women’s champion CECILIA BRAEKHUS on HBO, in May.  In this 8-round welterweight scrap, Reis took it to challenger PATY RAMIREZ, once again proving her boxing ability at the elite level of the sport.

The main event saw the return of the Local 66 union laborer, #3 world rated light heavyweight JOE SMITH JR.. Smith Jr. burst onto the scene in 2016 when he demolished ANDRZEJ FONFARA with a 1st-round KO, in his hometown of Chicago, and again when he became the first fighter to ever KO the legend, multi-time world champion, BERNARD HOPKINS, clear out of the ring, on HBO in California. After eleven months out of the ring due to a broken jaw, Smith Jr. did not hesitate to remind the boxing world why he is the hardest hitting light heavyweight, when he took on the “ROMANTIC REDNECK” MELVIN RUSSELL in the “SLUGFEST at the SUN” 10-round main event. Tune in to this one early, as it will be over before you know it.

On the NESN broadcast, you will hear top notch analysis from commentator, and in-ring analyst, Jahmai Webster as well as former middleweight champion, and Massachusetts native, Dana Rosenblatt.

Be sure to tune in THIS THURSDAY at 8:00 PM. Click HERE to find the NESN channel number in your area.

SLUGFEST AT THE SUN: THE RETURN OF JOE SMITH JR. 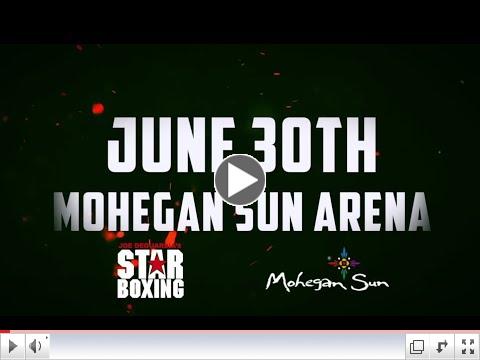 INFO:
“SLUGFEST at the SUN”: THE RETURN OF JOE SMITH JR.
After eleven months out of the ring due to a broken jaw, the “Common Man”, Union Local 66 laborer, Joe Smith Jr. returns at the beautiful Mohegan Sun Arena in Uncasville, Connecticut. After coming off a stellar KO win on NBC against Andrzej Fonfara, and knocking out the legend, Bernard Hopkins, clear out of the ring, on HBO, Smith Jr. has his eyes set on winning a world title. Smith Jr. is currently rated #3 (WBC) and #7 (WBA) in the world.
FACTS:

Joe DeGuardia’s Star Boxing “SLUGFEST at the SUN” series is the a premier professional boxing experience in Connecticut. Live from the beautiful Mohegan Sun Arena, “SLUGFEST at the SUN” has seen some of the best and brightest in boxing. This includes, two-time world champion Demetrius “Boo Boo” Andrade and world title challenger Delvin Rodriguez, amongst many others.

Connecticut Boxing Hall of Fame inductee, Joe DeGuardia, has consistently given the boxing fans of Connecticut, world class fights, right in their own backyard. “SLUGFEST at the SUN” also gives the north east’s rising boxing stars an avenue to world title contention. From world title fights, to world class boxing skill, Mohegan Sun has seen it all, delivered by Star Boxing.

The “SLUGFEST at the SUN” series offers an affordable, fan friendly action packed, entertaining night out, that is guaranteed to have you on your feet from the opening bell.

On June 30th, Star Boxing plans to start your summer off right, with yet another thrilling “SLUGFEST at the SUN.”

Mohegan Sun Arena is now ranked consistently among the top venues in the world according to Billboard Magazine, Pollstar and Venues Today. It has won “Casino of The Year” at the Country Music Awards in 2008 & 2010 and in 2013, was voted “Arena of The Year” at the G2E Global Gaming Conference in Las Vegas.  Mohegan Sun Arena was also ranked among the top 10 arena venues in the nation for 2014, regardless of size. In 2015, Mohegan Sun took home the IEBA award for “Casino of the Year.”  Mohegan Sun also won “Casino of the Year” in 2 categories at the 2013 & 2016 Academy of Country Music Awards. For more information on concerts and other great events, visit Mohegan Sun. For information on this week’s schedule, call the Entertainment and Special Events hotline at 1.888.226.7711, ext. 27163.

MONTAUK ULTRA H20:
Montauk Ultra H20, a new Chlorine and Florine free alkaline water, with a pH of 9.5. Hydrate like the pro’s.
MODELL’S SPORTING GOODS:
Founded in 1889, Modell’s Sporting Goods is the local family sporting goods destination that provides a convenient and compelling shopping experience for the athlete and fan in all of us.  Modell’s offers customers an assortment of top brands in sporting goods equipment, footwear and active apparel for every level of play year round.   The retailer operates 153 stores located in New York, New Jersey, Pennsylvania, Connecticut, Rhode Island, Massachusetts, New Hampshire, Delaware, Maryland, Virginia and Washington, DC.  In addition visit, http://www.Modells.com, which services customers all over the country.