Christopher “Pitufo” Diaz: “I Worked 15 Years For This”

Artemio Reyes to take on Gabriel Bracero in welterweight co-feature 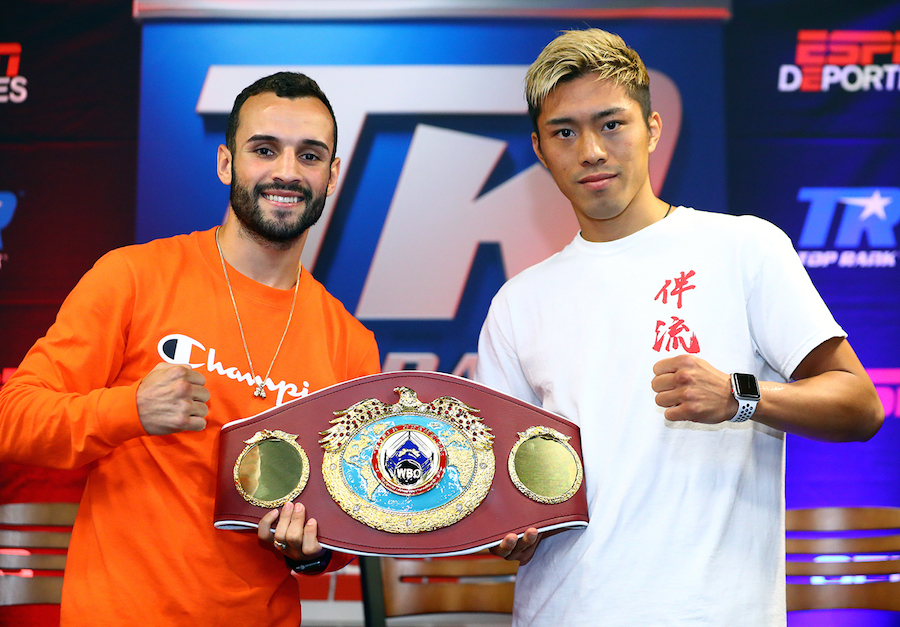 KISSIMMEE, Fla. (July 26, 2018) – Christopher “Pitufo” Diaz (23-0, 15 KOs) will have the crowd on his side Saturday evening at the Kissimmee Civic Center when he takes on Japan’s Masayuki Ito (23-1-1) for the vacant WBO junior lightweight title.

Kissimmee is home to a large Puerto Rican population, and Diaz is seeking to become the fifth current male world champion from the “Island of Enchantment.”

Ito, who has fought solely in Japan as a professional, will look to become the ninth 130-pound world champion in the rich fighting history of his homeland.

Diaz-Ito and the 10-round welterweight showdown between Artemio Reyes and Gabriel Bracero will stream live and exclusively in the United States at 9:30 p.m. ET on ESPN+, with undercard action set for 6:30 p.m. ET on ESPN+. Also in action will be middleweight contender Esquiva Falcao (20-0, 14 KOs), who will face Jonathan Tavira (16-5, 12 KOs) in a 10-rounder.

Diaz and Ito crossed paths for the first time Thursday at the final press conference. This is what they, and many of the other fighters on Saturday’s card, had to say.

“I never expected to be at this point in my career. I had my pro debut in 2013, and I didn’t even know that I was going to get to 10-0, 20-0. And I never expected to be fighting for a world title. But my hard work every day, my anger, my passion for this sport, made me be here for this opportunity. I think nobody is going to take that out of me, and I feel so good. It’s a moment. It’s one more fight. I know Ito is a great fighter. I’ve been working for 15 years to now for this opportunity.”

“{My fans} know that I always make a war. I know Masayuki Ito is going to come to give me a war. That’s the kind of fight that I want for the fans.”

“Thanks for giving me the opportunity to fight here. Also, I appreciate Top Rank, All Star Boxing, and Teiken Promotions. I did not have enough English training, but I did have hard training in boxing every day. I promise I’ll show a very good fight on Saturday night.”

“You can expect to see a good fight. First of all, I want to thank Bob Arum and Top Rank for giving me the opportunity. My team, we worked hard for this camp. {Everyone} is going to see a good show. We trained hard for this fight. I know {Bracero} is a tough fighter. These short-notice opponents are always the toughest because we were studying for one style and now they’re coming with a different style. But, nonetheless, we’re ready to go, and we’re ready to go for 10 rounds and put on a great show.”

“I’m willing and able to fight anybody who is willing to step in the ring with me. I’m going to go out there and get the victory.”

“I want to thank everyone at Top Rank for giving me the opportunity. It was a last-minute call. I took the fight on maybe seven, eight days’ notice. But the good part about it was, I was just in training camp. I’ve been in training camp for the past six weeks. I was Robert Easter’s main sparring partner for his fight against Mikey Garcia… and I was also sparring with Devon Alexander for his fight against {Andre} Berto. So, when I got this call at the last minute, I was all in. I was ready for it. I look forward to putting on a performance here in Kissimmee. I have a lot of friends and family here.”

Promoted by Top Rank, in association with All Star Boxing and Teiken Promotions, remaining tickets to this world championship event, priced at $100 (red carpet ringside), $50 (lower bowl), and $30 (general admission), may be purchased at the Kissimmee Civic Center box office, online at ticketerapr.com, or charge by phone at (787) 305-3600.

ESPN+ is the first-ever multi-sport, direct-to-consumer subscription streaming service from The Walt Disney Company’s Direct-to-Consumer & International segment in conjunction with ESPN. ESPN+ offers fans two exclusive, original boxing programs: The Boxing Beat with Dan Rafael (Tuesdays, weekly) and In This Corner (twice monthly). In addition to boxing content, fans can watch thousands of additional live events, on-demand content and original programming not available on ESPN’s linear TV or digital networks. This includes hundreds of MLB, NHL and MLS games, Grand Slam tennis, Top Rank boxing, PGA TOUR golf, college sports, international rugby, cricket, the full library of ESPN Films (including 30 for 30) and more. Fans can subscribe to ESPN+ for just $4.99 a month (or $49.99 per year) and cancel at any time.