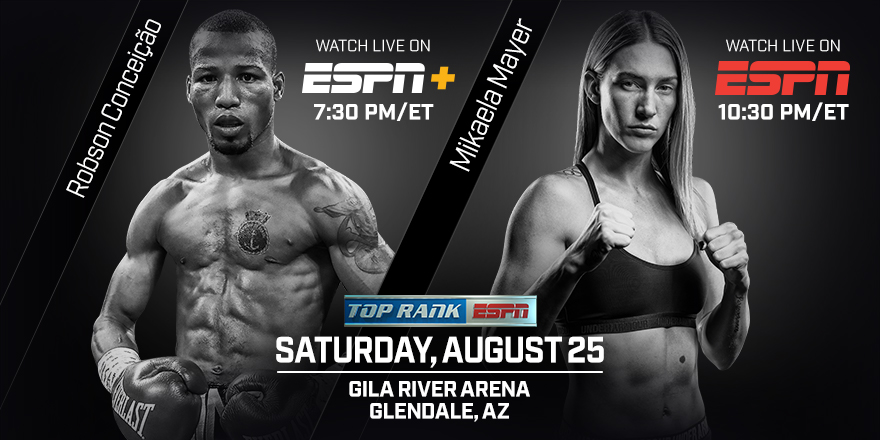 “Fighting live on ESPN is a dream come true and something I have been looking forward to since I made the decision to leave the amateur ranks and turn pro with Top Rank,” Mayer said. “I gave up my dream of an Olympic gold medal to step onto a bigger stage and to help take women’s boxing to the next level. Now, after years of fighting out of the limelight, I get to showcase my skills on the greatest sports network in the world.”

Mayer (6-0, 3 KOs) has become one of the most recognizable figures in female boxing after making her pro debut in August 2017. Mayer, who currently lives and trains in Colorado Springs, Colorado, will be making her fourth ring appearance of 2018. Kiss (14-7, 8 KOs), a one-time world title challenger from Budapest, Hungary, represents Mayer’s stiffest professional test to date. Mayer last fought June 30 in Oklahoma City, where she used a steady jab to outpoint the previously undefeated Sheena Kaine over six rounds. Mayer also fought May 12 at Madison Square Garden on the Vasiliy Lomachenko-Jorge Linares undercard, shutting out the game Baby Nansen over six rounds. She started her 2018 campaign with a 35-second knockout against Maria Semertzoglou on March 10 at the StubHub Center in Carson, California.

Now, after a half-dozen pro bouts fighting on cards alongside some of the sport’s best fighters, Mayer is ready for her ESPN close-up.

ESPN+ is the premium multi-sport, direct-to-consumer subscription streaming service from The Walt Disney Company’s Direct-to-Consumer & International (DTCI) segment in conjunction with ESPN.  ESPN+ offers fans two exclusive, original boxing programs The Boxing Beat with Dan Rafael (Tuesdays, weekly) and In This Corner (twice monthly).  In addition to exclusive Top Rank boxing content, programming on ESPN+ includes hundreds of MLB, NHL and MLS games, thousands of college sports events (including football, basketball and multiple other sports from more than 15 conferences), UFC (beginning in 2019), Grand Slam tennis, international and domestic rugby, cricket, new and exclusive documentary films and series, acclaimed studio shows and the full library of ESPN’s award-winning 30 for 30 films. Fans can subscribe to ESPN+ for just $4.99 a month (or $49.99 per year) and cancel at any time.