Live on ESPN and ESPN+ from the Save Mart Center in Fresno, California 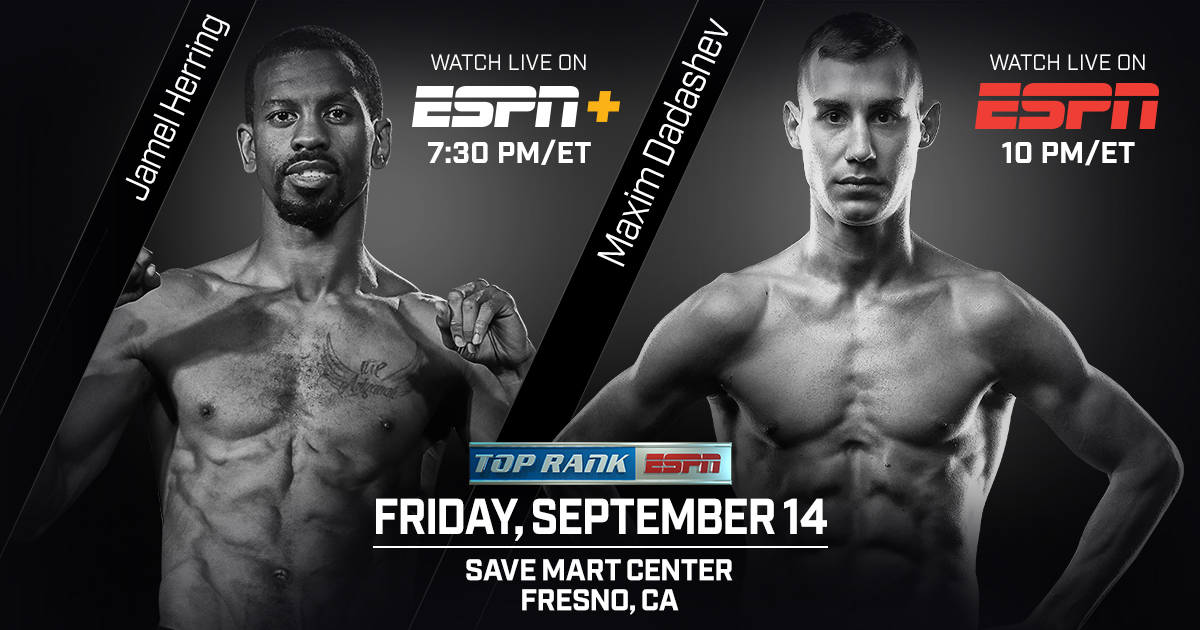 Ramirez-Orozco and Dadashev-DeMarco will be televised live on ESPN and ESPN Deportes at 10 p.m. ET, with the entire undercard to be streamed at 7:30 p.m. ET on ESPN+ — the new multi-sport, direct-to-consumer subscription streaming service from The Walt Disney Company’s Direct-to-Consumer & International segment in conjunction with ESPN.

Dadashev (11-0, 10 KOs) is coming off a 10th-round stoppage against former world champion Darleys Perez on June 9 in Las Vegas, while DeMarco (33-6-1, 24 KOs) most recently knocked out then-undefeated Eddie Ramirez in the first round in October of last year.

Promoted by Top Rank, in association with Golden Boy Promotions, tickets to this world championship event, priced at $150 (floor), $90, $60, $35, and $25, plus applicable fees, are on sale now. Tickets can be purchased online at ticketmaster.com, charge by phone at 800-745-3000, or at the Save Mart Center box office. For more information and box office hours, visit www.savemartcenter.com.

“This is going to be the biggest night in the history of Central Valley boxing, as more than 14,000 fans will pack the Save Mart Center to watch Jose Ramirez defend his world title,” said Rick Mirigian, Ramirez’s manager. “The undercard is a special one, and we can’t wait for the fans in attendance and watching on ESPN and ESPN+ to see what we have in store.”

“DeMarco is a skilled veteran and a former world champion who I have a lot of respect for,” Dadashev said. “I am ready to fight for a world title soon, and DeMarco is in my way. I will put on a spectacular performance for the great fans in Fresno and for everyone watching on ESPN.”

“I’m just honored and excited to be back for this card,” Herring said. “As some may know, Jose and I were Olympic teammates, but we haven’t fought on the same night since our amateur days. It’s great to reunite with a close friend again. I’m really motivated to fight for my first title as a professional. Though it isn’t for a world title, a big win here will catapult me higher in the rankings and a step closer to a world title. I’m also motivated for this fight because Moralde got a victory over one of my training partners {Ismail Muwendo} in his last outing, so I feel as if we must get that victory back. I look at every fight as a title fight, and let’s not forget I’m fighting in front of my Marine Corps family so it’s a must that I put on a great performance!”

“It feels great to be fighting on Mexican Independence Day weekend,” Flores said. “This has been the best training camp of my career, so the fans can expect an explosive Gabe Flores Jr.!”

“I’m so excited about signing with Top Rank. I would like to thank Mr. Bob Arum, the greatest promoter in the world, for this amazing opportunity,” Okada said. “Ever since I signed, I’ve been training harder than ever. This is such a great chance, and I am going to do my best to make the most of it.”