PHOTOS: Beltran vs. Pedraza / Dogboe vs. Otake / Mayer vs. Kiss 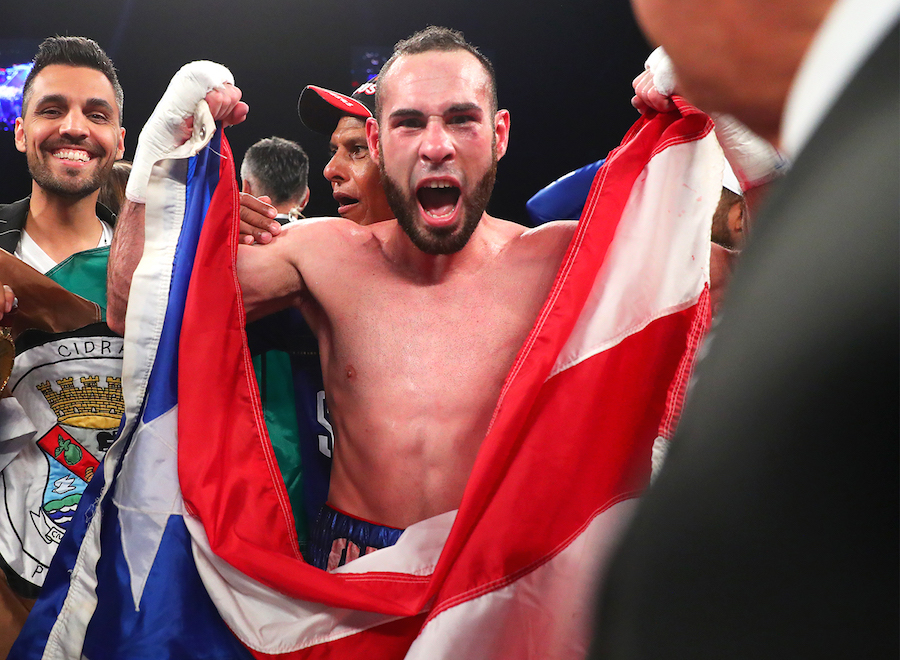 GLENDALE, Ariz (Aug. 25, 2018) — Jose “Sniper” Pedraza is now a two-weight world champion. Pedraza scored an 11th round knockdown and won a unanimous decision to dethrone WBO lightweight world champion Ray Beltran on Saturday evening at the GIla River Arena.Scores were 117-110, 117-110, and 115-112 for Pedraza, who was previously the IBF 130-pound champion of the world.

With the victory, Pedraza (25-1, 12 KOs) is expected to fight WBA lightweight champion Vasiliy Lomachenko on Dec. 1 to unify two of the division’s titles. Pedraza returned from a 14-month layoff in March and won two bouts to earn the shot at Beltran.

“We did everything that we needed to do to win this fight. We followed the game plan perfectly,” Pedraza said. “I knew how tough this fight was going to be and at moments it got very difficult, but thanks to the focus and the guidance from my corner, we were able to win round by round and get the win.”

Said Beltran, who fell to 35-8-1: “I thought it was a good, close fight. The knockdown made the difference. I got caught with a really good shot.”

The storm came in a hurry, as Isaac “Royal Storm” Dogboe blasted out Hidenori Otake via TKO at 2:18 of the opening round to retain his WBO junior bantamweight world title. Dogboe (20-0, 14 KOs) knocked down Otake (31-3-3, 14 KOs) down twice in the round, and a follow-up flurry forced referee Chris Flores to call a halt to the bout.

Dogboe won the title with a thrilling 11th-round TKO against Jessie Magdaleno in April. This time, he had a shorter night at the office.

“This was a great performance. I’m glad I got to showcase my skills on ESPN,” Dogboe said. I’m very thankful for the opportunity. I have a lot of respect for Otake for standing up after getting dropped. When I hit him with that powerful hook and dropped him the first time I felt the holy spirit.

“Now, I want to face all the champs. Lets do this. I’m ready to unify all the titles.”

In the ESPN-televised six-round special attraction, Mikaela Mayer (7-0, 4 KOs) knocked down Edina Kiss in the first round en route to a third-round TKO after Kiss did not come out for the fourth round. Mayer, a 2016 U.S. Olympian, is 4-0 in 2017.

“I’m happy with my performance. I was technically sound,” Mayer said. “I thought I had it in the bag. I wanted to stop her. If I had one more two more rounds, I would’ve finished it.”

Conceicao said: “It was a very good fight. I trained very hard, and little by little, I’m showing what I’m capable of doing inside the ring. I wanted to go the full eight rounds. This was my first time fighting to eight rounds, and I wanted to test myself. I felt great. I’m ready to fight more rounds in my next fight.”

Castro said: “It was a four-week camp with a new trainer, new everything. I’ll take the win and the rounds. That’s what I needed. I’m going back to the drawing board. I know I could’ve stopped this guy, but I’m happy with the win.”

* De Vaca knocked down Serrano with a right hand in the fourth round.

De Vaca said: “I’m happy with the win, but I felt I could’ve done better. I look forward to my next fight soon. Fighting in front of my hometown fans was really special. Serrano was a tough guy, and we put on a great fight for the fans.”

McCumby said: “I’m happy with my performance. I got in there and got the win. I could’ve boxed a little more, but it felt good to make my return and end it in style.”