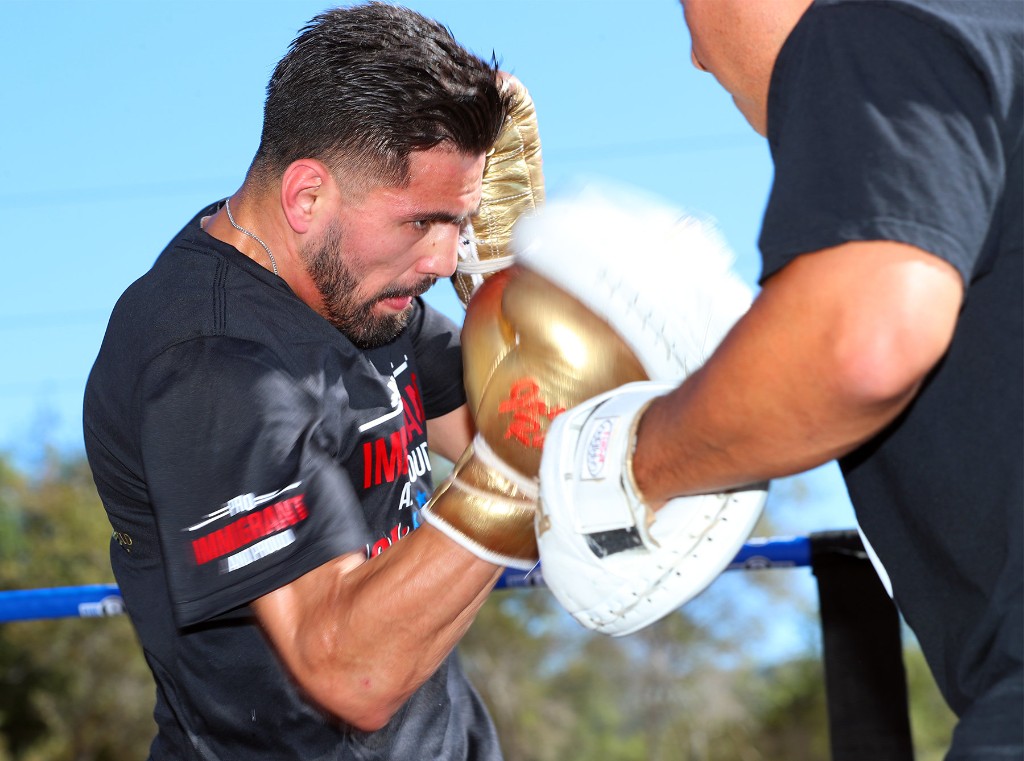 FRESNO, Calif. (Sept. 11, 2018) – The time is finally here for Jose Ramirez, who will make the first defense of his WBC super lightweight world title against top contender Antonio Orozco on Friday at the Save Mart Center. Ramirez (22-0, 16 KOs) was supposed to defend his title at the Save Mart Center on July 7, but the bout was canceled when Danny O’Connor was hospitalized for dehydration before the weigh-in. Orozco (27-0, 17 KOs) represents his toughest test to date.

Ramirez-Orozco, Herring-Moralde, and Flores-Gutierrez will be televised live on ESPN and ESPN Deportes at 10 p.m. ET, with the entire undercard to be streamed at 6:30 p.m. ET on ESPN+— the recently-launched multi-sport, direct-to-consumer subscription streaming service from The Walt Disney Company’s Direct-to-Consumer & International segment in conjunction with ESPN.

On Tuesday at Chukchansi Gold Resort & Casino, Ramirez and many of the fighters from Friday’s card worked out for the media. This is what they had to say.

“This is going to be a great fight. We are both very hungry. He’s 27-0 and has been waiting for an opportunity like this, to fight for the WBC title. That pushes me even harder. This has been one of my longest camps, and the results will show in the ring.”

“After that happened, I took my family out to Maui (Hawaii). In Maui, I was out there running and enjoying the fresh air, getting my frustrations out. It’s frustrating when you get ready for a fight and then it falls through. There was a lot of disappointment coming from my fans, but they understand that it wasn’t my fault, that it was more my opponent not doing things correctly. At the end of the day, everything happens for a reason. I have a much better opponent to make my first title defense. I think it’s going to be a good fight for the boxing fans, for the Hispanics and the Mexicans that really like action fights. Specifically for them, I think they are going to be pleased to watch it on a big boxing weekend.”

“He’s aggressive. I feel like he has a very fan-friendly style. He has a style that brings out fighters to fight. It’s what we like.”

On entering hostile territory in Fresno

“I’m fighting Jose Ramirez. I’m not fighting the fans or Fresno. That’s beside the point. I’m focused on Jose Ramirez and the fight. Everything else is just ambient noise.”

On his weight struggles

“Earlier in the year, I left for Guadalajara, Mexico, and I just have a different view of things. I met a nutritionist down there and made 140 in March. I’m on the same regimen. What happened before, there are things that people don’t know. Besides the point, I’m over that. It’s done and over with. But, hey, I’m not worried about it. I got bigger things to worry about, and that’s what my focus is on. I’ve had my downs and I’ve had my ups, and this is an opportunity I’m not going to let go.”

On fighting as ESPN co-feature

“I’m just excited to fight alongside Jose, who is my good friend and Olympic teammate. I’ll be fighting in front of 14,000 screaming fans on the ESPN flagship station. I’m honored. I’m excited. I can’t wait to get in there.”

“I respect him. He’s here for a reason. I have fought a stronger pedigree of fighters. I saw his last two fights. I see he has issues with stamina at times. He looked good in his last fight {against Ismail Muwendo}, but I’m not Muwendo.”

“I’ve been waiting my turn to fight on ESPN, and my time is now. This is for the kids in Stockton who look up to me. I want to inspire the kids in my community.”

“This is a big opportunity for me. A win here will put my name in the conversation for bigger fights.”

“Herring is good and strong, but there is nothing extraordinary about him. It’s not like he’s Lomachenko.”

“It means a lot to fight at home. I’m a better fighter, and I am ready to perform for the hometown fans.”

On training with Robert Garcia

“I’ve picked up a lot of new strategies. It was a great six-week camp. I feel like we’re going to take this guy out early. No hesitation.”