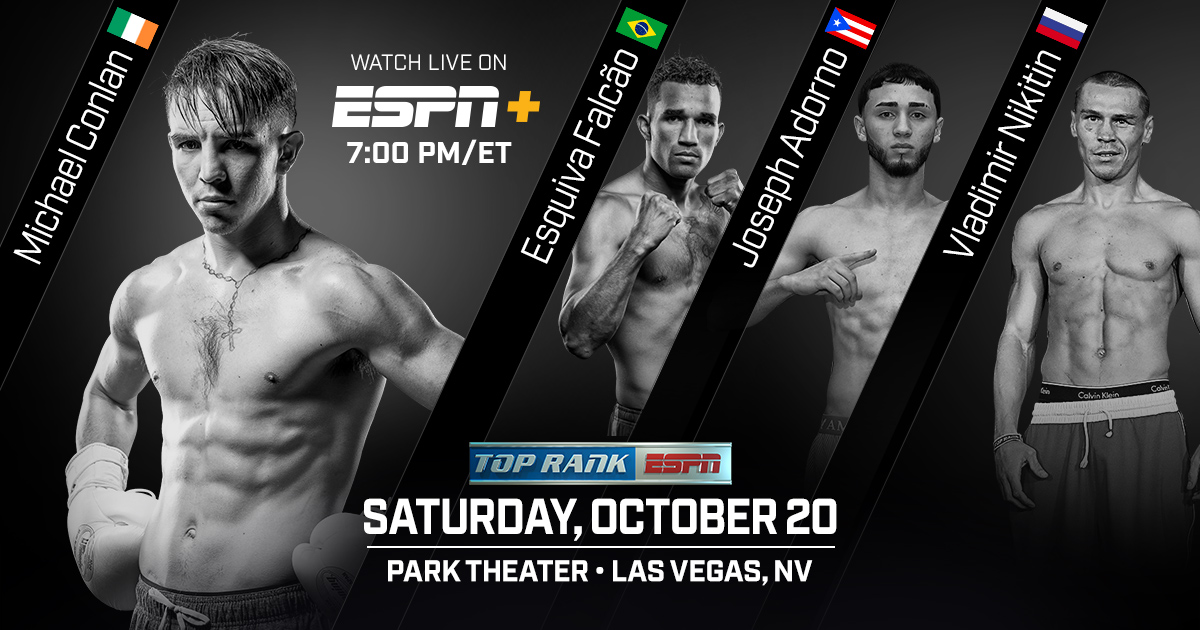 Conlan vs. Cipolletta will be the featured attraction on the undercard broadcast, which will begin at 7 p.m. ET on ESPN+ — the new multi-sport, direct-to-consumer subscription streaming service from The Walt Disney Company’s Direct-to-Consumer & International segment in conjunction with ESPN.“It has always been a dream of mine to fight in Las Vegas, and that’s becoming a reality thanks to Top Rank,” Conlan said. “The Conlan Revolution is rolling into Sin City and ready to turn it green!”

Also appearing on the undercard will be Conlan’s Olympic nemesis, Vladimir Nikitin (1-0), who turned pro in July with a six-round decision victory against Edward Kakembo. Nikitin won a highly disputed decision over Conlan in the Olympic quarterfinals, sparking Conlan to lash out against the AIBA-appointed judges with his memorable middle finger salute. Nikitin will face Clay Burns (5-4-2, 0 KOs) in an eight-round featherweight contest.

As for Conlan (8-0, 5 KOs), he has been active since making his professional debut in front of a sold-out Hulu Theater at Madison Square Garden crowd on St. Patrick’s Day in 2017. In his last bout, June 30 in his hometown of Belfast, he dominated former world title challenger Adeilson Dos Santos via eight-round decision. Cipolletta, from Naples, Italy, is a former Italian featherweight champion who is coming off a second-round TKO victory against Jozsef Ajtai.

The undercard broadcast will also include:

About Park Theater
The 5,200-seat Park Theater, with its cutting-edge audio and visual technology, provides artists of diverse talents with a dynamic space to create one-of-a-kind productions where every seat allows guests to feel up close and personal. From comedy shows and live concerts, to sporting events and award shows, the theater is specially designed to transform seamlessly for any occasion. For more Park Theater show and ticket information, visit ParkTheaterLV.com or follow on Facebook, Twitter and Instagram.

About Park MGM
Park MGM is the newest destination on the Las Vegas Strip, offering an intimate resort experience on a grand scale. A partnership between MGM Resorts International and New York-based Sydell Group, Park MGM features 2,700 guest rooms and suites, casually elegant design and a remarkable culinary program including Hogsalt Hospitality’s renowned Bavette’s Steakhouse; Juniper Cocktail Lounge; and South-of-France inspired restaurant Primrose. Park Theater, the resort’s entertainment destination, is a 5,200-seat venue home to special engagements by Bruno Mars, Cher and Lady Gaga, making her debut at the end of 2018. Park MGM is located in the heart of The Strip, next to the entertainment and dining neighborhood created by The Park and the 20,000-seat T-Mobile Arena. Additional developments at Park MGM will be announced as the resort experience unfolds throughout 2018. Park MGM is owned by MGM Resorts International (NYSE: MGM). For more information and reservations, visit ParkMGM.com, call toll-free at 888-529-4828 or follow on Facebook or Twitter.