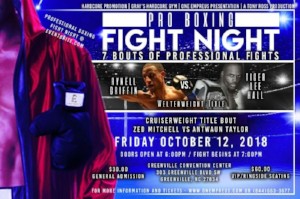 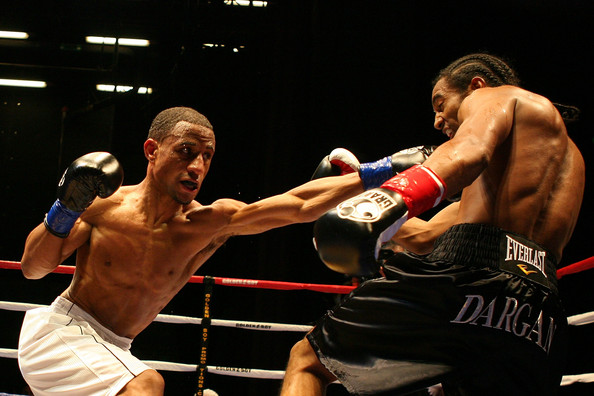 Las Vegas, NV (October 8) – Rynell Griffin has had the opportunity to fight all over the world against some of the best up and coming fighters.  Facing heavy favorites in their hometown has been grueling but has readied Griffin for this particular experience.  On October 12, 2018, Griffin is finally getting his shot against an evenly matched opponent in veteran Richard “Tiger” Lee Hall.  Griffin is hell-bent on winning the Welterweight title and the North Carolina crowd at the Greenville Convention Center.

In the truest sense of the word, Griffin is a “Survivor.”  In 2005,  Hurricane Katrina directly impacted Griffin and his family.  Katrina forced his family and friends to scatter or relocate all over the country.  Griffin tried to stay, but the devastation was so bad he could only stay so long and had to move to Texas.  Griffin returned home to New Orleans, but he had an epiphany that changed his life forever.  “After returning to NewOrleans, I realized after moving to Texas and other places, why not give myself an opportunity to pursue my career,” said Griffin.  Griffin hopped on a plane to Las Vegas and the rest is history as Griffin began the life of a journeyman fighter taking fights on short notice all over the world against talented fighters with big names like Rances Barthelemy, Yordenis Ugas, Antonio Escalante, Ivan Redkach, Maurice Hooker, and Sergey Lipinets to name a few.   Griffin has always survived to see another day and make a few dollars along the way.

Griffin is really excited about this moment and on Friday, October 12, he will not take his opponent lightly.  He sees the moment as a possible chance to turn around his career.  “When you go into a guy’s backyard, you don’t expect a decision.  You fight the fighter, the judges, and sometimes the ref.  It makes it a mental challenge.  But, a lot of times when a fighter goes into another fighter’s stadium, they steal the crowd and the crowd starts rooting for the other guy. With my style and technique and the way I put on a show, who knows, I might steal the crowd.  Fans should expect a beautiful, smiling, and exciting night of boxing.”…Rynell Griffin

This scheduled seven-bout card will be action-packed and features two title fights.  Tiger Lee Hall will face Rynell Griffin for a Welterweight title and Greenville’s Zed Mitchell will face Antwuan Taylor for a Cruiserweight title.

Tickets to the One Empreus and Hardcore Promotion event are priced at $30 for Early Bird General Admission and $60 for Early Bird VIP/Ringside (A very limited amount of Early Bird General Admission and VIP/Ringside tickets are still available but subject to availability through the Greenville Convention Center Box Office). Regular Tickets can be purchased at the Greenville Convention Center Box Office – by going online at https://bit.ly/2OvPJNq or by calling (844)663-3677.