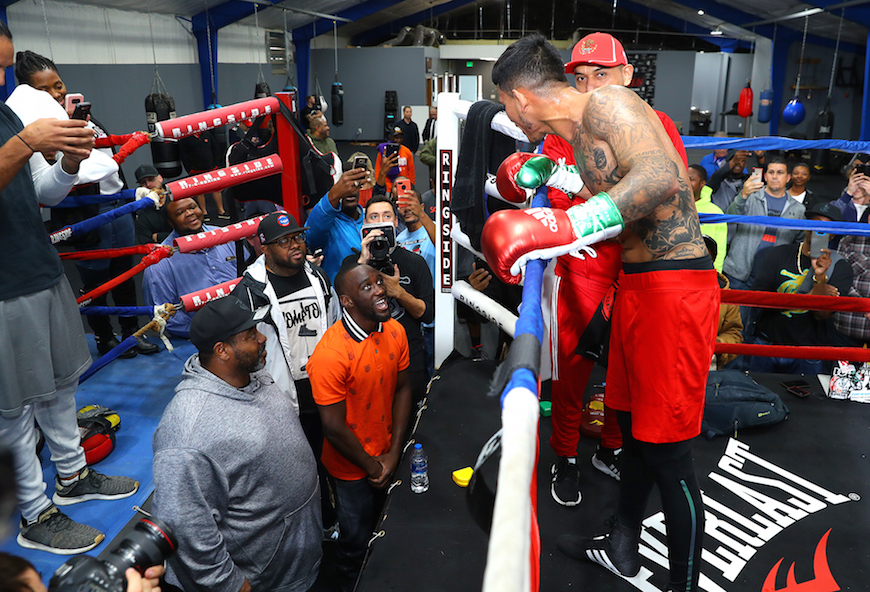 OMAHA, Neb. (Oct. 10, 2018) — Terence Crawford is excited to be back in Omaha, his beloved hometown and the site of many of his greatest fistic moments. The man nicknamed “Bud” will defend his WBO welterweight world title Saturday evening against Jose Benavidez Jr. at the CHI Health Center Omaha (formerly the CenturyLink Center), live on ESPN and ESPN Deportes beginning at 10:30 p.m. ET. His four CHI Health Center outings have drawn nearly 45,000 fans, and another packed house is expected.

The long-simmering animosity between Crawford and Benavidez spilled over into Wednesday’s media day, with the pair and their respective teams exchanging verbal haymakers.

The ESPN broadcast will also include 2016 U.S. Olympic silver medalist and top featherweight prospect Shakur Stevenson (8-0, 4 KOs) in a 10-rounder against the battle-tested Viorel Simion (21-2, 9 KOs).

On the beef between him and Benavidez

“It’s been real since day one, since the fight has been announced. It ain’t been nothing but real.”

On whether Benavidez deserves the title shot

“No. Not at all. But that ain’t the point. The point is we’re here now, and we’re fighting on Saturday. Come Saturday, all the talking will be out the window.”

On people asking about future opponents and not Benavidez

“I’m just gonna keep doing what I’ve been doing, and that’s winning the fights and looking spectacular each and every fight. Everything else will fall into place.”

“It’s part of the game, but I’m not worried about that. They do their thing, and I’ll do mine on Saturday.”

“Once he feels them punches going upside his head, I don’t even know if he’s going to want to stand there next to me.”

“It’s time to show the world what I can do. I’ve been waiting for this my whole life.”

“I don’t see anything special in him. I don’t know why everyone hypes him up so much.”

“Honestly, no, because I come from the amateurs where I went into tournaments and didn’t know who I was fighting. I was fighting randoms, never seen them fight before, and then I get in the ring. I saw them across the ring, and I won. I don’t think it made a difference.”

On Simion as a fighter

“This is my toughest opponent as a pro. I never fought an opponent with this type of record. I’m coming here, as always, to put on a show.”

On fighting as ESPN co-feature

“I love fighting on ESPN. I love the fact that I get to fight on Bud’s undercard, and he’s the main event and I’m the co-main event. I’m ready to open the show.”

On moving down to 130 pounds

“I’m a lot stronger than ever while fighting at a lower weight. I’m coming into my own as an athlete.”

On adjusting to the pro game

“From my first fight to now, I see such a huge difference. There’s such a big difference between the amateurs and the pros. For each opponent, my team and I look at what they do best and how we can counter it.”

“I don’t feel any added pressure because this is what I wanted. I’m going to go in there and get the job done.”

“Fighting {in Nebraska} the last time in 2017, I had a good knockout. I’m ready to do it again. From that point until now, I got a new trainer. I’ve been doing new things in training. For me to apply what I’ve been working on, I didn’t really have a chance before the last fight. It’s good. I needed some rounds. I had some inactivity.”

On fighting in front a raucous crowd Omaha

“It gives you more motivation, and I like the intensity. I’m happy to be on this stage again.”

“I am 100 percent recovered from my foot injury and ready to show the fans that I am the future of the 154-pound division. It’s a big honor to fight on this card, and I want to give the fans in Omaha and watching on ESPN+ an incredible show.”

“Conley is a tough guy, but I am 100 percent prepared. I feel comfortable at 154 pounds. My power is going to be too much for him.”

Crawford-Benavidez and Stevenson-Simion will air live and exclusively on ESPN and ESPN Deportes at 10:30 p.m. ET with undercards streaming live in the United States at 7 p.m. ET on ESPN+ — the new multi-sport, direct-to-consumer subscription streaming service from The Walt Disney Company’s Direct-to-Consumer & International segment in conjunction with ESPN.

Remaining tickets to this world championship event, priced at $178, $103, $63, and $38, not including applicable fees, can be purchased at the CHI Health Center Omaha box office, all Ticketmaster outlets, by phone at 800-745-3000, or online at ticketmaster.com.

Use the hashtag #CrawfordBenavidez to join the conversation on social media.