Dogboe to face Emanuel Navarrete as co-feature to Lomachenko-Pedraza 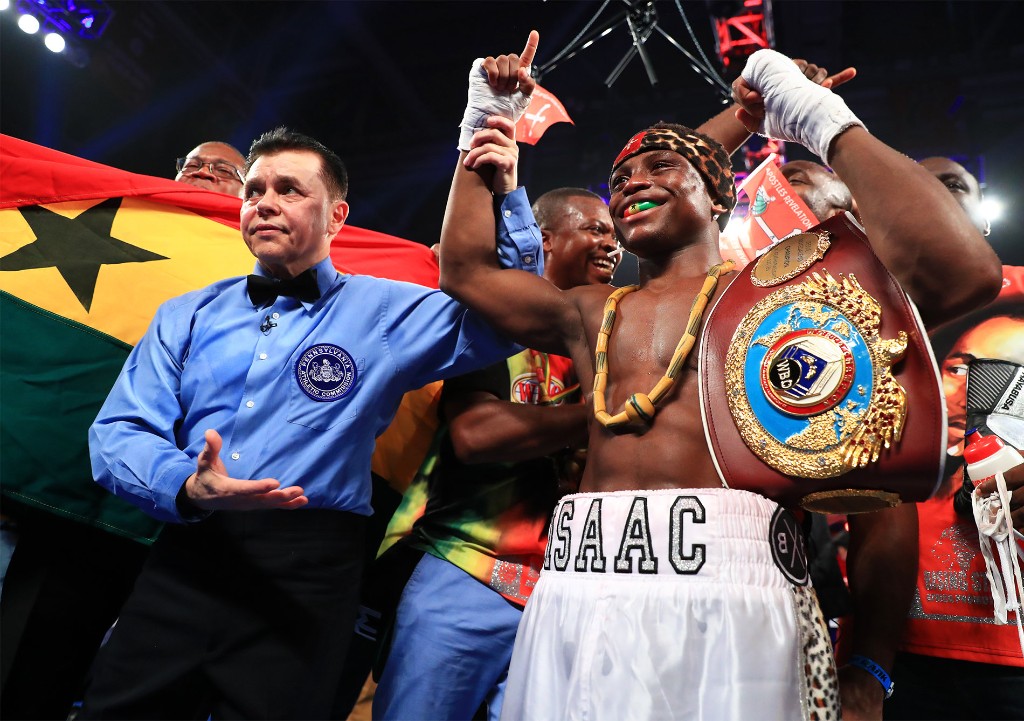 Isaac “Royal Storm” Dogboe will make the second defense of his WBO junior featherweight title against the hard-hitting Emanuel Navarrete as the co-feature to the previously announced Vasiliy Lomachenko-Jose Pedraza lightweight unification bout at the Hulu Theater at Madison Square Garden.

Lomachenko-Pedraza and Dogboe-Navarrete will headline a special edition of Top Rank on ESPN at 9 p.m. ET, which will follow the 84th Annual Heisman Memorial Trophy Presentation.

“Put me among the best, and you’ll see the best of Isaac ‘Royal Storm’ Dogboe,” Dogboe said. “We love the New York crowd. That’s what will motivate us and make us fight harder. Madison Square Garden is a legendary place. It’s a place where many fighters were made. Lomachenko and Pedraza are great fighters and being featured on a show with other great fighters is an honor. We are ready to roll. And to my fans, trust me, the ‘Royal Storm’ is coming to entertain!”

“Many boxers come and go like the common cold, but Isaac ‘Royal Storm’ Dogboe is here to stay,” said Paul Dogboe, Isaac’s father and trainer. “This is it. New York, here we come!”

“This is the opportunity I was waiting for. I have a lot of respect for Isaac Dogboe, but this title will be mine,” Navarrete said. “I feel very happy and motivated by this opportunity, even more, because of fighting in New York City. I know that from Dec. 8 forward, the name Emanuel Navarrete will be known all around the world. I’m sure this win will be mine.”

Dogboe (20-0, 14 KOs) has emerged in 2018 with a trio of victories that has him on the shortlist for Fighter of the Year honors. He opened his 2018 campaign Jan. 5 with a fifth-round TKO against Cesar Juarez to win the interim WBO world title. Dogboe dethroned world champion Jessie Magdaleno on April 28 in Philadelphia, recovering from a first-round knockdown to batter Magdaleno en route to an 11-round stoppage. In his first title defense, Aug. 25 in Glendale, Ariz., Dogboe knocked out the normally durable Hidenori Otake in the opening round.

Navarrete (25-1, 22 KOs), a 23-year-old from Mexico City, is one of the 122-pound division’s heaviest hitters. He has won 20 consecutive bouts since a four-round decision loss and is riding an eight-fight knockout streak. In his last bout, June 2 in Monterrey, Mexico, he knocked out Jose Sanmartin in the 12th round of a brutal battle.

Use the hashtags #LomaPedraza and #DogboeNavarrete to join the conversation on social media.