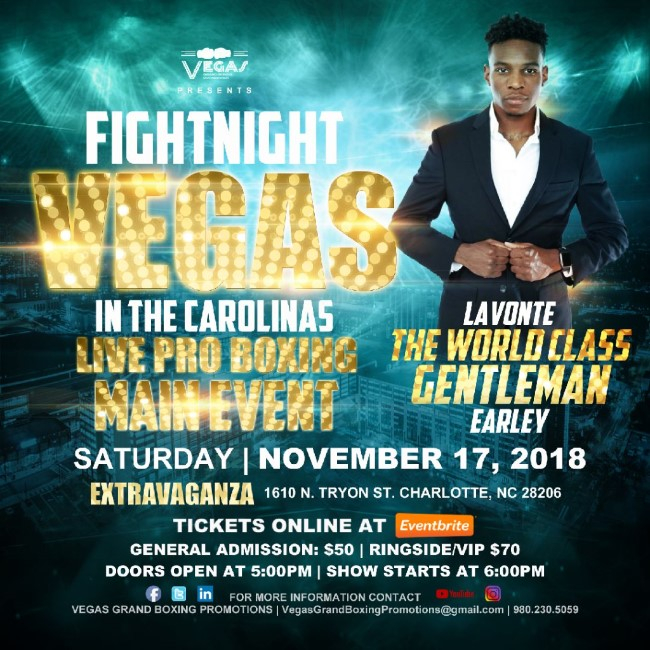 LaVonte Earley “WCG” Is Back Saturday, November 17, 2018, At The Extravaganza In Charlotte, North Carolina

Charlotte, NC (October 20) – Every good hero needs theme music, and from the positive energy LaVonte “WCG” Earley is giving with his return to the ring, his music should be Jay Z’s “PSA.”  “Allow me to re-introduce myself/ my name is Earley/ W to the C G/ handing out ass whoopins to those put in front of me..”  Excuse me Jay Z and his fans for taking liberties with your music, but it is hard to contain one’s emotions when LaVonte “World Class Gentleman” (WCG) Earley, the most exciting fighter from Charlotte, North Carolina, returns to the ring Saturday, November 17, 2018, at the Extravaganza in Charlotte, North Carolina.

Earley 6-0 (4 KO’s) is often asked how he got his “WCG” nickname.  Earley’s mom, Lavonda Earley-Stacey, taught him at an early age to keep his elbows off the table, be polite, open doors for people, say Yes, Sir! No, Ma’am! and to act in a chivalrous manner.  Earley is quick to tell you “World Class exemplifies my future self, my journey ahead, but of all the character traits I have whether life is positive or negative, my most consistent character trait is being a gentleman.  A world class gentleman,” said Earley.

Earley has not fought since November 18, 2017.  A foot injury sidelined the promising, young, 24-year old star for a few months, but the thoughtful, intelligent businessman, and athlete recognized he has many years ahead of him, so he had no reason to rush back from the injury.  “I hurt my foot in March.  I have a long career ahead of me.  I could have fought a few months after the injury, but I wanted to be sure I was 100% before I did anything,” said Earley.  For anyone thinking ring rust will show in his November 17, 2018, return, Earley works full-time at the 4M gym as a boxing trainer, so he has been staying sharp.  While Team Earley, which consists of manager Travon McEntyre, trainers Adam Esposito (2017 North Carolina Trainer of The year), his dad Frankie Brown, and marketing guru (his sister) Erica Lawrence, have his back outside of the ring, Earley has been keeping his part of the deal and taking care of his body and working on technique.  “I was back in the gym as soon as I could start walking on my foot.  I didn’t do anything crazy training wise, but I was working on some things and protecting my foot,” said Earley.

November 17 will be a big night for Earley and his mom’s Vegas Grand Boxing Promotions.  It will be the return of Charlotte, North Carolina’s best and most exciting fighter, it will be the first time LaVonte Earley fights on his mom’s Vegas Grand Boxing Promotions’ card, and it will be his mom’s big moment to show the world she is bigger than life as a promoter.  “WCG” had this to say about why fans need to come out November 17, “This is a really special moment.  As a son and a mother, we have been through a lot.  It is a pretty big moment.  We will really reflect on this afterwards, but we make things happen.  She does her thing outside the ring, and I do mine in the ring.  This is the culmination of hard work.  I want fans to come out and support us, because it is going to be a really special night.  We are in a zone.  We are making it happen.  Look to see a show.  WCG is back.  It has been a long time.  I have a whole lot of ass whoopin built up, so I have to let it loose!”…LaVonte Earley

This must-see event will have continue the United States Military rivalry between the Marines and Army as nasty rivals JacQuan “Da King” Townes and Miree “The Pink Panther” Coleman settle it in the ring “Marine vs. Army” for the WBF Cruiserweight Silver International title.

Tickets to the Vegas Grand Boxing Promotions event are priced at $50 for General Admission and $70 for Ringside/VIP.  Tickets are available online by going to https://bit.ly/2p8HiJJ – Tickets can also be purchased by calling (980) 230-5059 or emailing Vegasgrandboxingpromotions@gmail.com.