With Wife, VanZant, Cheering Him On

LAS VEGAS, NV, (October 22, 2018) – Final Fight Championship welcomed a distinguished guest on Friday night, Oct. 19th, and she was sitting ringside to support her husband. UFC Flyweight Fighter, Paige VanZant, was in attendance for “FFC 32 – Graves vs. Seumanutafa” watching her spouse, Austin “AK-47” Vanderford (6-0-0), deliver a blistering knockout to Edmilson Freitas (7-3-0) in the first round of their co-main event bout.

Vanderford won his sixth straight fight and kept his unblemished record in tact, after landing a solid left hand to the temple of Freitas at the 1:38 mark of round one. VanZant, as you can image, was filled with excitement as she watched her hubby win in such convincing and thrilling fashion.

“I loved it, I am proud of him”, said VanZant “I just have so much confidence in him, in this one I wasn’t really nervous at all, he is so prepared and ready for anything.”

Vanderford’s first round knockout of Freitas sent the crowd at Fight Dome Las Vegas into frenzy, and it allowed Vanderford to realize that he is getting one step closer to achieving all of his professional goals.

“I feel that I’m getting closer and closer to making things happen for me”, said Vanderford “I want to thank the FFC and the entire organization for giving me the opportunity and the fight, and I just knew if I connected with one of my power shots he (Freitas) was going to sleep.”

Needless to say, “FFC 32” was both a fun and productive night for the newlywed couple. VanZant and Vanderford tied the knot recently in an oceanfront ceremony on September 29th.

“It was awesome, they (FFC) put on a great show here”, said VanZant “It’s cool that they (FFC) display the fighters this well and hopefully he (Vanderford) can fight here again.”

You can watch the video of Paige VanZant’s “FFC 32” interview here: 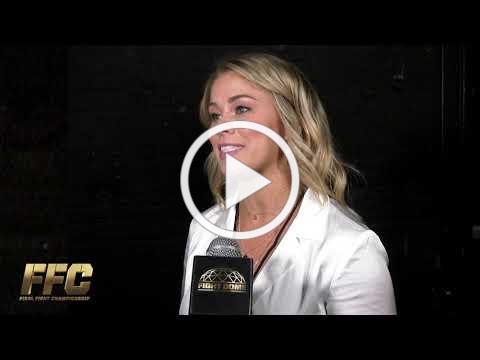