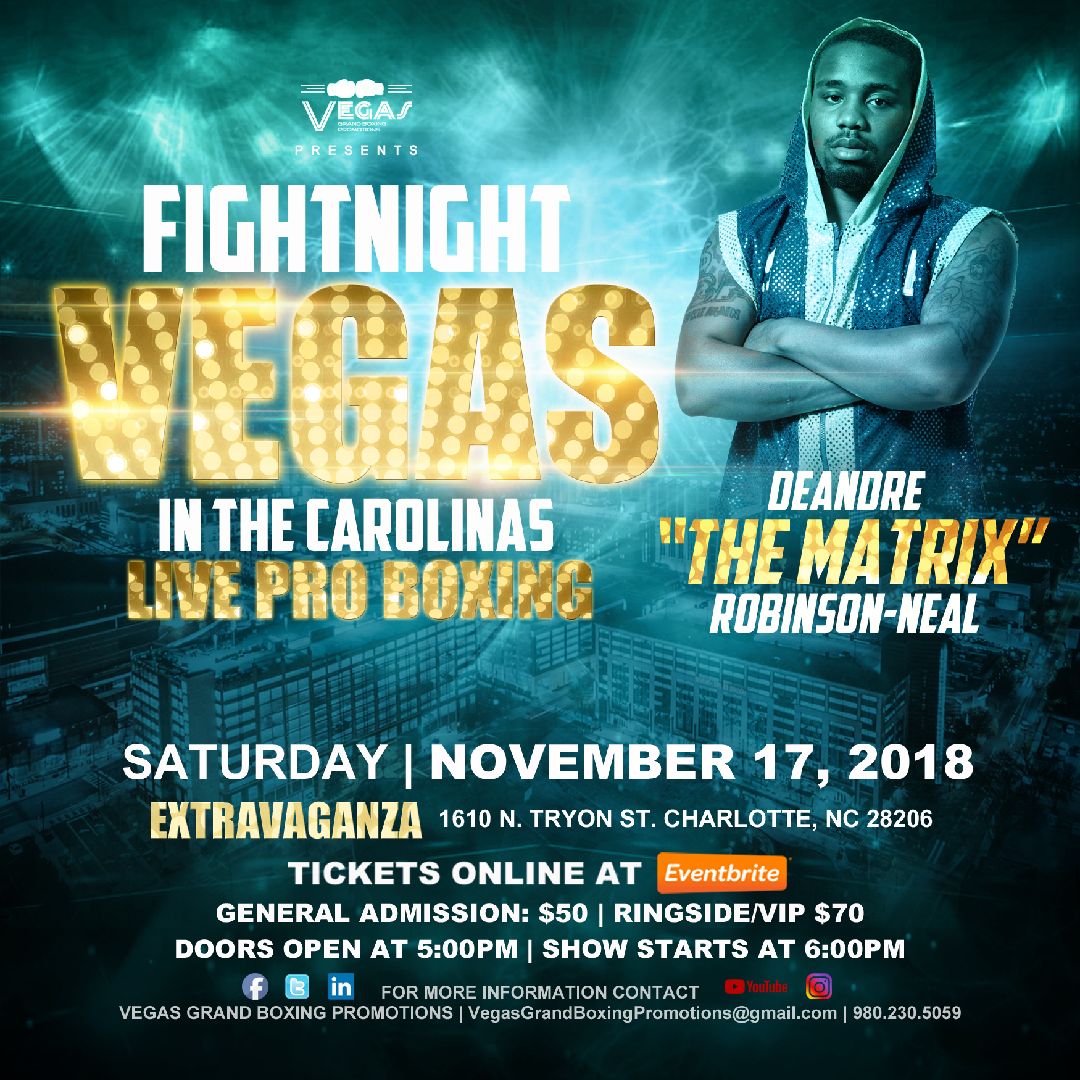 ***For Immediate Release***
Columbia, South Carolina (October 23) – Deandre “The Matrix” Robinson-Neal started boxing at the early age of eight years old.  After one hundred and twelve (112) amateur fights and twenty professional fights, the undefeated South Carolina boxer wants to start being recognized on Saturday, November 17, 2018, as one of the best young boxers.

Robinson-Neal 19-0-1 (9 KO’s) will tell you he is a South Carolina raised, kid, who turned pro at the early age of seventeen and is attracted to and driven in the sport of boxing by his dad Dominic Robinson-Neal 7-0 (4 KO’s), who is a former pro, and the great Roy Jones Jr.  While Robinson-Neal might not be complicated outside the ring, Robinson-Neal, A.K.A. “The Matrix,” is a complex mess for opponents.  Robinson-Neal is not your average fighter athletically or mentally.   Robinson-Neal wants to be a world champion, but he wants to be recognized as a great fighter and world champion.

Robinson-Neal is a slick defensive fighter with excellent counter punching skills.  “I like to swim and not get wet.  I am not a fan of getting hit for no reason,” said Neal.  When on the offensive, he is fast enough to pick his shots and powerful enough to keep his opponents off balance.  “Deandre is another version of Roy Jones Jr.  Maybe not the original, but you will see a lot of similarities between Roy Jones Jr. and Deandre Robinson-Neal,” said Deandre’s father Dominic.

The November 17 Vegas Grand Boxing Promotions’ card has special meaning for Deandre Robinson-Neal.
Robinson-Neal will be fighting for the second time in Charlotte and for the fifth time in the state of North Carolina, where fans have shown him nothing but love.  Robinson-Neal will be returning to the ring for the first time in ten months (multiple fighters and promoters pulled out on him at the last minute) and he has the chance to perform in front of his boxing idol.  “I love North Carolina.  North Carolina has always shown me, love.  It has always been fun.  Great commission and I love the crowd.  Roy being there is special.  I grew up watching him, and now he will be watching me.   I have to put on a good show.  Fans should come to see flash, charisma, confidence, and everything you look for in a fighter.  They are in for a show on November 17.”…Deandre Robinson-Neal.

This must-see event will continue the United States Military rivalry between the Marines and Army as nasty rivals JacQuan “Da King” Townes and Miree “The Pink Panther” Coleman settle it in the ring “Marine vs. Army” for the WBF Cruiserweight Silver International title.

Tickets to the Vegas Grand Boxing Promotions event are priced at $50 for General Admission and $70 for Ringside/VIP.  Tickets are available online by going to https://bit.ly/2yTUnec – Tickets can also be purchased by calling (980) 230-5059 or emailing Vegasgrandboxingpromotions@gmail.com.