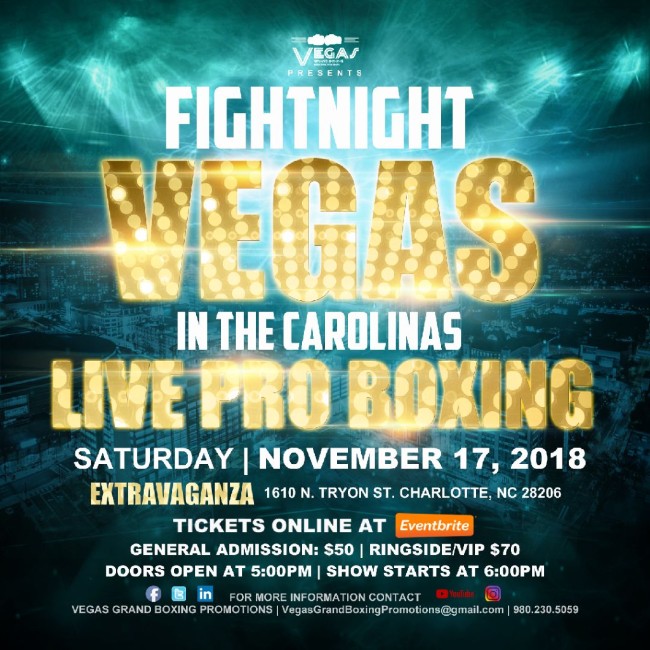 JacQuan Townes And Miree Coleman Will Battle For A WBF Title In What Will Be The 2018  North Carolina Fight Of The Year Saturday, November 17, 2018, On The Vegas Grand Boxing Promotions’ Card At The Extravaganza Events Center In Charlotte, North Carolina

Charlotte, NC (October 25) – It’s a showdown of heated rivals.  A battle between a marine and an army veteran.  No more talk, so you need to be there as JacQuan Townes and Miree Coleman battle in what will be the 2018 North Carolina fight of the year.

Townes has had enough of “The Pink Panther’s” mouth and is ready to shut up and retire the man he calls nothing but a Facebook thug, a social media hoax. 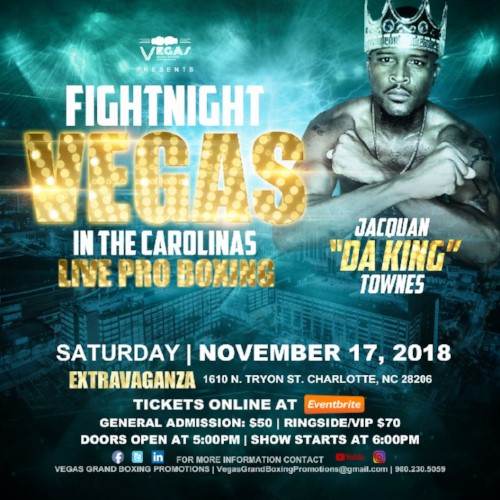 Too much time has passed and Townes just wants one thing to happen, “I need November 17 to get here, so I can put this man down once and for all.  I’m tired of seeing him and hearing him,” said a confident and calm Townes.  Townes added, “The biggest part of his game is still his mouth, and I’m going to shut it!”…JacQuan Townes

Coleman isn’t so calm when he talks about finally fighting the man they call “Da King.” 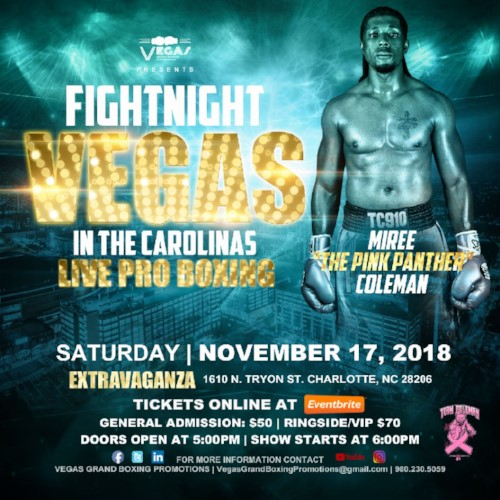 Coleman is in the best shape of his life and more than ready to win a WBF title against a fighter Coleman deems, “Not worthy to be in the ring with the Pink Panther.”   “As I said before, I am the real King or Da King; however he wants to misspell it.  I was the King before he learned how to put on his trunks, and I’ll be the King on November 17 when he is stretched out on the canvas and I’m chilling on the throne.  He doesn’t have the talent.  He is boring.  His style sucks.  He can’t punch, and he puts fans to sleep.  I’m going to do the fans a real favor.  I’m going to knock his wannabe Marine butt out.  “Prey” for Townes, and this message has been approved by the Pink Panther.”…Miree Coleman.

This must-see event will continue the United States Military rivalry between the Marines and Army as nasty rivals JacQuan “Da King” Townes and Miree “The Pink Panther” Coleman settle it in the ring “Marine vs. Army” for a WBF title.

Tickets to the Vegas Grand Boxing Promotions event are priced at $50 for General Admission and $70 for Ringside/VIP.  Tickets are available online by going to https://bit.ly/2Rh8iTi &#8211; Tickets can also be purchased by calling (980) 230-5059 or emailing Vegasgrandboxingpromotions@gmail.com.