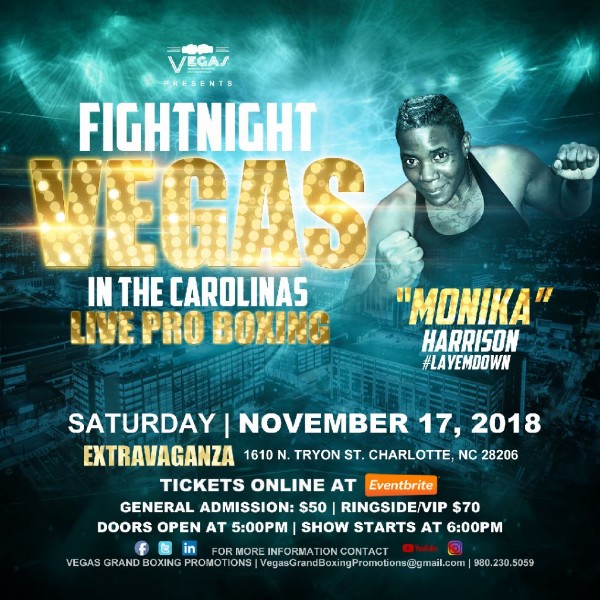 Monika Harrison Promises She Is Coming To Lay Down Tapa November 17 In Charlotte, North Carolina

Newark, New Jersey (October 30) – Monika Harrison has had to listen to Lai’D Tapa, Tapa’s Family, and Team Tapa come at her with a lot of talk about what Tapa has done in wrestling, what Tapa can do in a ring, and what Tapa will do to Harrison.  Quite frankly,  Harrison is tired of the phony act and promises, and she is coming to lay down Tapa November 17, 2018, at the Extravaganza Events center In Charlotte, North Carolina.  “Since this fight was first announced, her, her family, and her fans have done a lot of talking.  I fell back and just listened.  It’s my time to do the talking.  I’m ready to show up and show out.  I’m going to to get in the ring and show her what I got.  It’s my time to get at her.  She is number 1 in the US.  I’m taking that.”  Monika Harrison.

Harrison 1-0 (1 KO), a construction worker who is originally from Georgia and currently resides in New Jersey, started in combat sports as a kickboxer seventeen years ago.  Fighting as a Heavyweight, Harrison has found it hard to get opponents both as an amateur and as a professional.  During a Golden Gloves tournament, four fighters, including Harrison, signed up to fight in her division.  After the other three fighters saw Harrison and her size,  they quickly withdrew from the tournament.  Harrison has had the same problem finding pro opponents.  After a long wait and finally making her pro debut July 28, 2018, Harrison has had a tough time trying to get a new opponent.  “I have to thank Lai’D Tapa for taking this fight, and I have to thank Boss Lady Sport & Entertainment, LaVonda Earley-Stacey, and Vegas Grand Boxing Promotions for making November 17 possible for me to showcase my talent,” said Harrison.

Harrison is confident and ready for her November 17th fight.  Harrison is not impressed with Tapa as a fighter, but she does recognize Tapa’s good looks.  Prior to this fight, Harrison didn’t know who Tapa was.  To Harrison, Tapa is just a pretty girl that does not present a threat inside the ring.  “She is a wrestler and that’s fake.  What kind of hands does she have?  That’s not boxing.  I hope she can move that big head she’s got.  It can’t be missed.  I’m looking for that knockout, and if she don’t go down in the first, she will fall in the second.  On November 17, it will not be her day.  I’m laying lady queen of the ring or whatever they call her out.  Tapas got to go down!”…Monika Harrison

Tickets to the Vegas Grand Boxing Promotions event are priced at $50 for General Admission and $70 for Ringside/VIP.  Tickets are available online by going to https://bit.ly/2SuMOnm – Tickets can also be purchased by calling (980) 230-5059 or emailing Vegasgrandboxingpromotions@gmail.com.