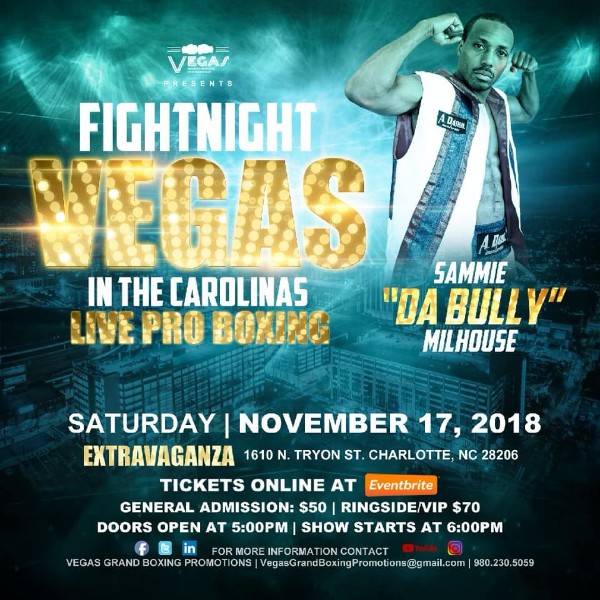 South Carolina Boxer Sammie Milhouse Is Fighting To Earn His Eighth Professional Win And Prove Age Isn’t Anything But A Number Saturday, November 17, 2018, On The Vegas Grand Boxing Promotions’ Card At The Extravaganza Events Center In Charlotte, North Carolina

Bamberg, South Carolina (November 4) – Sammie Milhouse is a personal trainer and business owner of a South Carolina gym and a full-service landscaping company.  Milhouse started boxing late in life, so on November 17th in Charlotte, North Carolina he wants to prove age isn’t anything but a number.

Milhouse 7-1 (5 KO’s), nicknamed “Da Bully” for his boxer-puncher style, has been boxing for ten years.  His father, uncles, and grandfather were fighters, but Milhouse did not take an interest in the sport until later in his life.  Milhouse is fully dedicated to the sport and does not take any shortcuts.  He has trained in Vegas, D.C., and the Northeast with such notable names as Demetrius “Boo Boo” Andrade, Zahir Raheem, Kareem Mayfield, Darnell Boone, and Dusty Harrison to name a few.  Former Light Heavyweight world champion and renowned trainer Eddie Mustafa Muhammad has taken Milhouse under his wing and has given Milhouse special attention, but Milhouse isn’t in boxing for the fame or the celebrity.  “I am doing this for the older guys who gave up on a dream and for the younger guys to show them there can be life after boxing.  You have to focus on boxing and getting ready, but you need to enjoy the moment.  Anything can happen.  You can get injured, you can’t always depend on one thing especially boxing.  People can see how well I take care of my body at forty (40) years old and see anything is possible as long as you put your mind to it,” says Milhouse.

On November 17 at the Extravaganza Events Center in Charlotte, North Carolina, Milhouse will be fighting for “people who said they couldn’t do something and gave up on a dream.”  He will be looking “to entertain the crowd by beating up on a younger guy and proving you should be true to yourself and never give up on your dream.  Fans should come to see “Da Bully” take it to the trenches.”  Sammie Milhouse.

Tickets to the Vegas Grand Boxing Promotions event are priced at $50 for General Admission and $70 for Ringside/VIP.  Tickets are available online by going to https://bit.ly/2F4DBzo – Tickets can also be purchased by calling (980) 230-5059 or emailing Vegasgrandboxingpromotions@gmail.com.