Live from the American Bank Center in Corpus Christi, Texas 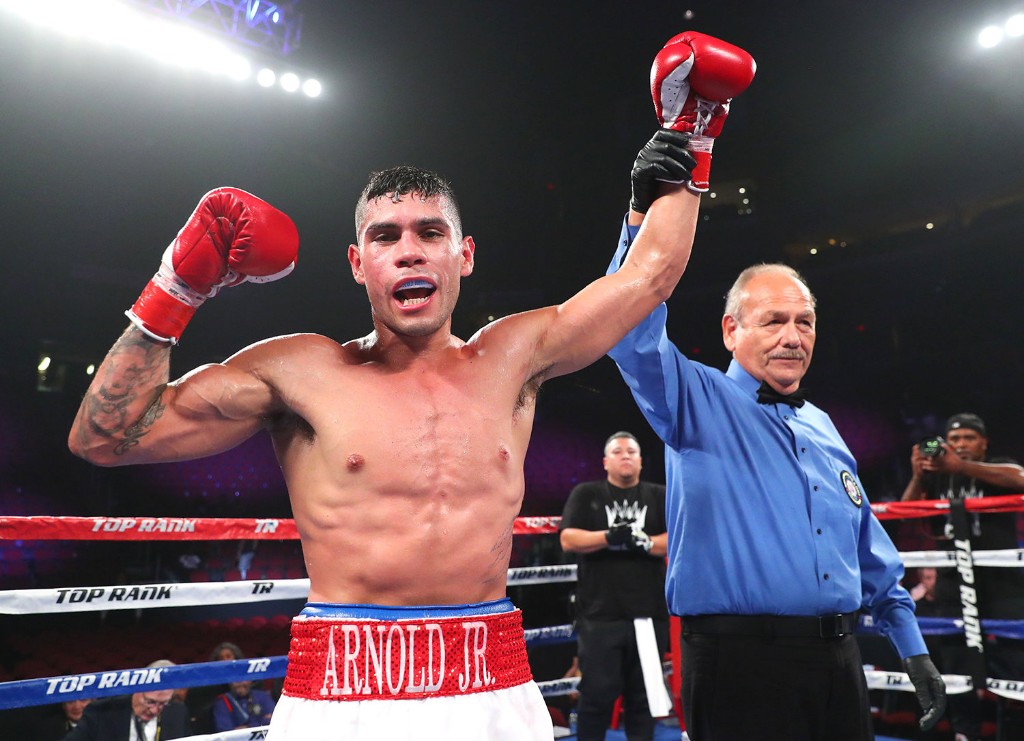 CORPUS CHRISTI, Texas (Nov. 29, 2018) – Arnold Barboza Jr. is hungry for a 140-pound world title shot. The Los Angeles native, who has fought all but one of his 19 professional bouts in California, will head to Texas intent on staking his claim as one of the division’s top contenders.

Barboza will face Manuel Lopez on Friday, Dec. 14 in a 10-rounder for the NABF junior super lightweight title at the American Bank Center in Corpus Christi, Texas. Barboza-Lopez will be the co-feature to the previously announced rematch featuring WBO champion Gilberto “Zurdo” Ramirez and No. 1 contender Jesse “Hollywood” Hart.

Ramirez-Hart 2 and Barboza-Lopez will stream live at 10 p.m. ET on ESPN+ — the new multi-sport, direct-to-consumer subscription streaming service from The Walt Disney Company’s Direct-to-Consumer & International segment in conjunction with ESPN. The entire undercard will stream live on ESPN+ beginning at 6:30 p.m. ET.

“I have heard that a world title shot is in my future, but I never take a fight for granted,” Barboza said. “I have trained really hard this fight. Lopez is a tough guy who I know from the amateurs. I am excited to have the opportunity to showcase my skills on a big platform. I never want an easy fight. This is a step-up fight, and I am ready to show the fans what I am made of.”

Barboza (19-0, 7 KOs), a native of Los Angeles, is 2-0 in 2018, including a hard-fought 10-round unanimous decision against Mike Reed on March 10 in Carson, Calif. Lopez (14-2-1, 7 KOs), a native of Denver, is entering this fight on a six-bout unbeaten streak dating back to a competitive 2015 decision loss to then-undefeated Kevin Watts.

The undercard stream will feature:

Mikaela Mayer (8-0, 4 KOs), the 2016 Olympian and one of the brightest stars in female boxing, will defend the NABF super featherweight title in an eight-rounder against Calixta Silgado (17-10-3, 12 KOs).

Big-punching Joshua “Don’t Blink” Greer Jr. (18-1-1, 10 KOs) will take on Daniel Lozano (15-5, 11 KOs) in a 10-rounder for the vacant WBC Continental Americas bantamweight title. Greer, who has won seven of his past eight bouts by knockout, is coming off a third-round TKO against Giovanni Delgado on Sept. 28 in Oakland, Calif.

In a six-rounder at super bantamweight, Jesus Arechiga (6-0, 6 KOs) will look to keep his knockout streak alive against David Martino (6-5, 4 KO).

Roberto Duran Jr. (1-0, 1 KO), son of the all-time great, will see action against Leonardo Pena (0-2) in a four-rounder at welterweight.

Use the hashtag #RamirezHart2 to join the conversation on social media.

About ESPN+
ESPN+, which surpassed one million paying subscribers in just five months, is the premium multi-sport, direct-to-consumer video service from The Walt Disney Company’s Direct-to-Consumer and International (DTCI) segment and ESPN. It offers fans thousands of additional live events, on-demand content and original programming not available on ESPN’s linear TV or digital networks, along with premium editorial content.

ESPN+ is an integrated part of the ESPN App, the leading sports app and the premier all-in-one digital sports platform for fans. The ESPN App is a showcase of the company’s culture of innovation, delivering a rich, personalized experience that curates all of ESPN’s content around each fan’s individual tastes. ESPN+ is also available through ESPN.com.