Undercard action, including the pro debut of Italian heavyweight Guido Vianello, to stream on ESPN+ begins at 6 p.m. ET 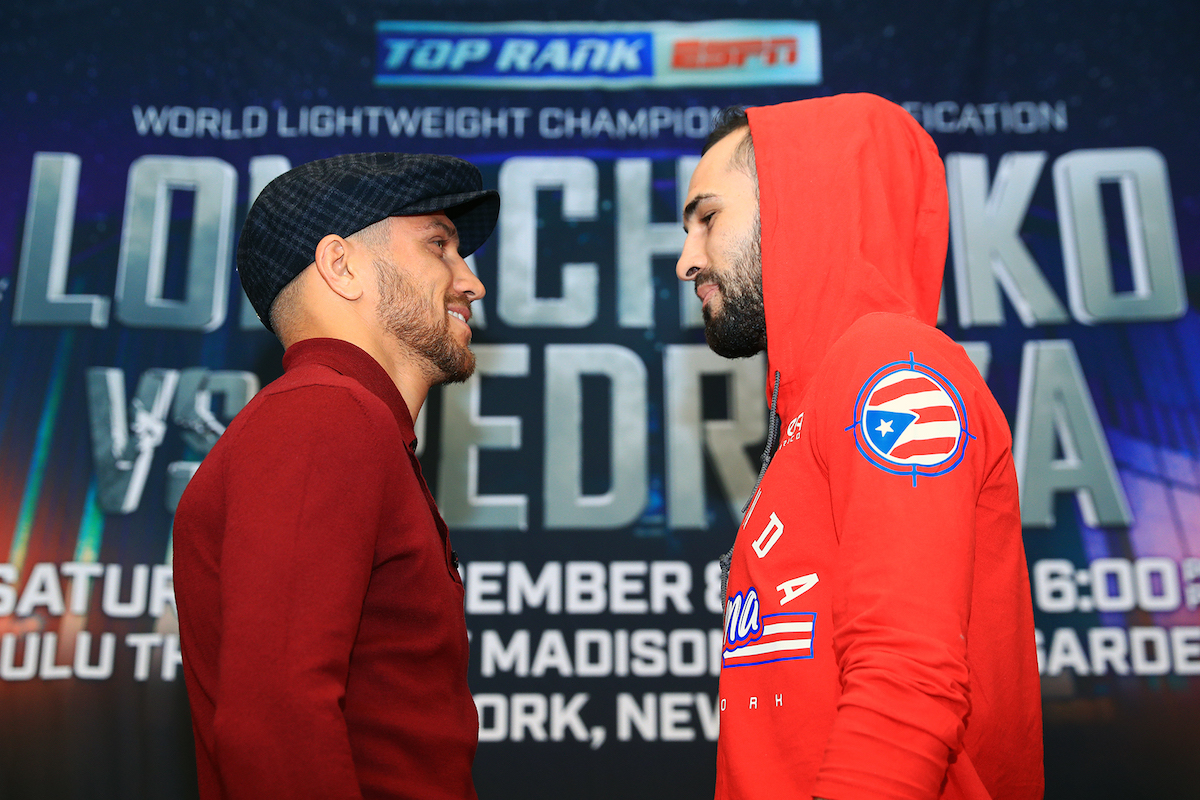 In the co-feature, Isaac “Royal Storm” Dogboe will make the second defense of his WBO junior featherweight world title against Emanuel “Vaquero” Navarrete. Dogboe snatched the title from Jessie Magdaleno back in April and defended it Aug. 25 with a first-round knockout over Hidenori Otake.

And, in a special attraction (ESPN+, 6 p.m. ET), 2016 Italian Olympian Guido Vianello will make his pro debut against Luke Lyons in a six-round heavyweight clash.

Here is what the fighters had to say Thursday from Madison Square Garden’s Chase Square.

On his surgically repaired shoulder

“I had a very interesting camp. I had hard sparring sessions and good preparation for this fight. I used all of my punches, and I think it will be the same as before {the surgery}.”

On Pedraza as a challenge

“I can’t answer that now. I need to feel what he brings, and after that, I can compare.”

“His style is not very interesting and not comfortable for all boxers because he’s always on defense and waiting for a mistake. If you’ve seen my fights, it will be similar to the {Miguel} Marriaga fight. They have the same style.”

On fighters out there who are a challenge

“I’m not disrespecting Pacquiao, but I don’t want to make my name bigger because I beat an old legend. I have my own road. There are a lot of good fighters to fight who are comparable to me. He’s old. I think his career is done. I don’t want to become a legend in boxing because of him.”

“Seriously, I want a fight with Mikey Garcia. I think this fight will happen. Then, I don’t know.”

“Since the moment I signed to fight {Ray} Beltran, I knew that the winner was going to fight Lomachenko. Mentally, I’ve been preparing, staying positive, staying focused, and also physically, I’m well prepared.”

“I had a great training camp for this fight. Lomachenko is a great fighter, a complete fighter, and I know that I will have to be at my best. I am prepared to put on a good fight.”

“Me {unifying} the titles on Saturday would mean a lot to {Puerto Rico}. It would be the first Christmas after what happened with Hurricane Maria. Definitely, me winning on Saturday would bring a lot of joy and blessings to the island.”

“We couldn’t have asked for a better 2018. Before entering into 2018, my uncle said to me, ‘All you have to do is dance into 2018. Be happy.’ And that’s exactly what we did. We started by knocking out Cesar Juarez, another fine Mexican fighter. And we moved on to Jessie Magdaleno, another tough world champion. He’s one of the best in my division. And after that, we defended it against Hidenori Otake, one of Japan’s toughest fighters. It’s been a blessing. Three knockouts out of three fights, and this will be four knockouts out of four fights in 2018. It’s always been a blessing.”

“Emanuel Navarrete is also one of Mexico’s finest fighters, as tough as they come. He reminds me of Israel Vazquez and Juan Manuel Marquez. These are great, great legendary fighters. When he talks about the fighting spirit of the Mexicans, you know he’s going to come and fight.”

“I am very grateful for the opportunity to fight a great super bantamweight champion like Isaac Dogboe. What better way to become a world champion than to do it on a stage like Madison Square Garden.”

“Maybe people don’t know me, but I’ve had a great career in my country and I’m focused on taking advantage of this opportunity and bringing the title home to Mexico.”

“It’s my fourth time {fighting at Madison Square Garden}. Like always, I am here to put on a show and ‘The Takeover.’ That’s what I’ve always said, and come Saturday night, we’re here to take over the show.”

“I know Mason Menard. He’s going to definitely come out there and fight, bring the fight. But they all try the same thing, and it’s not going to work. No matter what they do, no matter what they try, they’re in there with a real one.”

“When I started in boxing, my dream was to go to the Olympics and go to America for a fight in Madison Square Garden with Top Rank. So now the dream {has come true}. I am very excited and ready for this fight.”

“I am a mix between {Wladimir} Klitschko and Muhammad Ali. I move in the ring and I am aggressive. I want to box and fight.”

On training with Abel Sanchez

“I have the best training in the world. The training was very hard every day in Big Bear. We ran every morning. For this, I am very, very ready for the fight.”

Use the hashtag #LomaPedraza to join the conversation on social media.