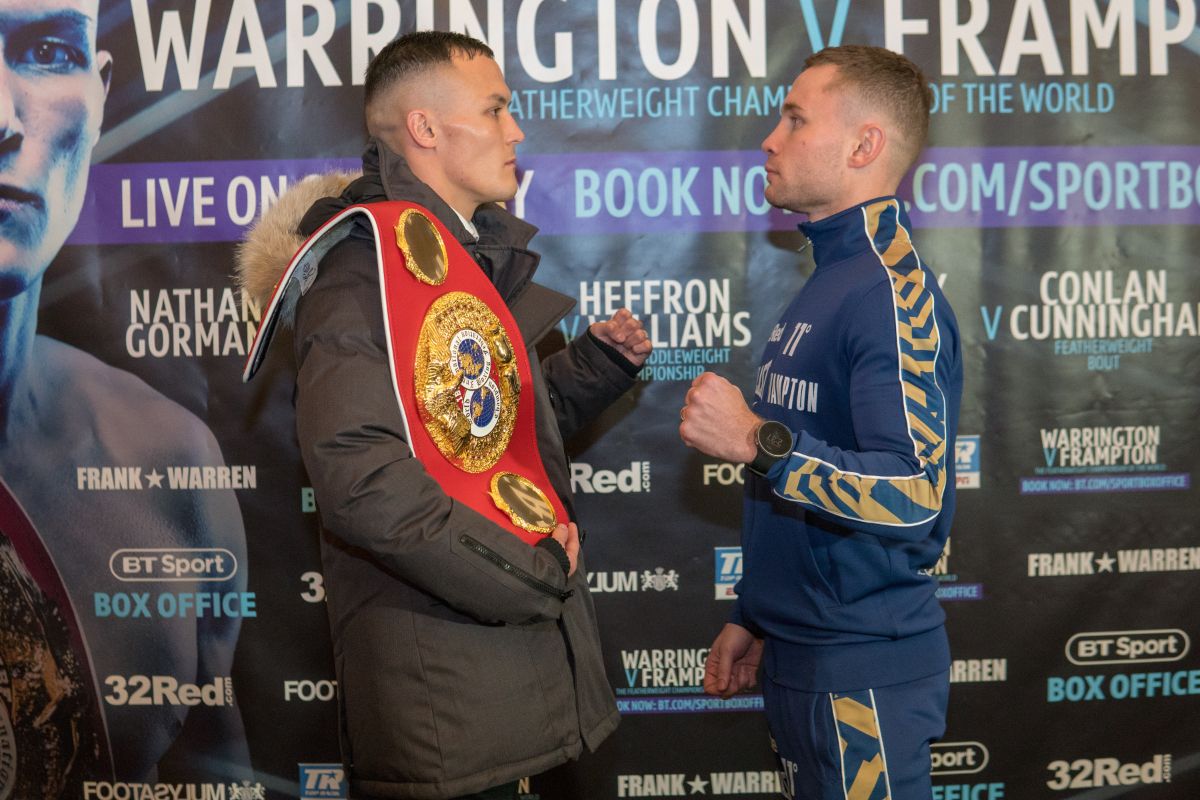 Warrington, the newly minted champion from Leeds, England, will make the first defense of his title against Frampton on Saturday from Manchester Arena. In one of the co-features, former two-time Irish Olympian Michael “Mick” Conlan (9-0, 6 KOs) will battle veteran southpaw Jason Cunningham (24-5, 6 KOs) in a 10-rounder for the WBO Intercontinental featherweight title.

The Warrington vs. Frampton/Conlan vs. Cunningham card will stream live and exclusively in the United States this Saturday beginning at 1 p.m. ET on ESPN + — the new multi-sport, direct-to-consumer subscription streaming service from The Walt Disney Company’s Direct-to-Consumer & International segment in conjunction with ESPN.

Also on the ESPN+ stream:

Light heavyweight Tommy Fury, younger brother of Tyson Fury, will make his professional debut against Jevgenijs Andrejevs in a four-rounder.

“I’ve never said that he’s past his best. All I’ve said is you can’t judge the performances against {Nonito} Donaire, against {Luke} Jackson and against the other geezer he boxed in Belfast after a long layoff, to the ones against {Leo} Santa Cruz. That was when Carl was at the peak of his career. Every fighter has peak years, it’s a long career and it’s a long time to hold that level.”

“I want the big fights. I believe I’m capable of beating any featherweight. I want to fight the best and talk of unification excites me. I wouldn’t want a steady one after this one either. I want to go straight to the States and fight the likes of Oscar Valdez.”

“There are people out there who have doubted me and people who think that I’m done, and this will be sticking the fingers up to them and saying there’s plenty left to give.”

“I think it’s been unjust because you look at the fights I’ve had – Quigg, Santa Cruz, Santa Cruz – and I got beat (by Santa Cruz) in a close fight after beating him in the first fight, and people think I’m done.”

“I’ve had three fights [since the Santa Cruz defeat]. I’m not going to let anyone take it away from me. I want this title more than I’ve ever wanted a title.”

“I’m really pleased to be a part of {this card}. It’s a huge show, first {British} pay-per-view show I’ve boxed on. I’m looking forward to a great evening Saturday night.”

“Everyone knows Jason is tough. He has a lot of experience. He’s obviously won two Commonwealth titles in two different divisions, I think. It’s nothing I haven’t seen before, whether it’s amateur or professional. I had over 260 fights as an amateur and nine so far as a professional. I’ve faced every type of style you can face. I’ve fought many southpaws. I worked very hard in this training camp. I haven’t taken him lightly at all. Saturday night, I’m just looking to go in and put on a good performance.”

“I had good southpaws in for sparring this training camp. I’m very, very confident in what I’m going to do.”

“If Jason wants to come into the trenches with me, I’m more than happy for that. That’s something I would love him to do. If he is the man he says he is, and I know he’s a tough man, but if he does that, game over.”

“I’m excited by this opportunity. This is what I do. I don’t shy away from fights. We’ll see what Michael’s got Saturday night.”

“This is a proper acid test {for Conlan}. I respect him, obviously his amateur achievements.”

“I’m going into this fight {with} no pressure if you like, with the experience behind me. I’m going to leave it all in there Saturday night. I’m enjoying this moment being part of this bill. It’s a bill to be proud of, and I’m just really, really looking forward to Saturday night.”

Use the hashtags #WarringtonFrampton and #TheConlanRevolution to join the conversation on social media.

ESPN+ is an integrated part of the ESPN App, the leading sports app and the premier all-in-one digital sports platform for fans. The ESPN App is a showcase of the company’s culture of innovation, delivering a rich, personalized experience that curates all of ESPN’s content around each fan’s individual tastes. ESPN+ is also available through ESPN.com