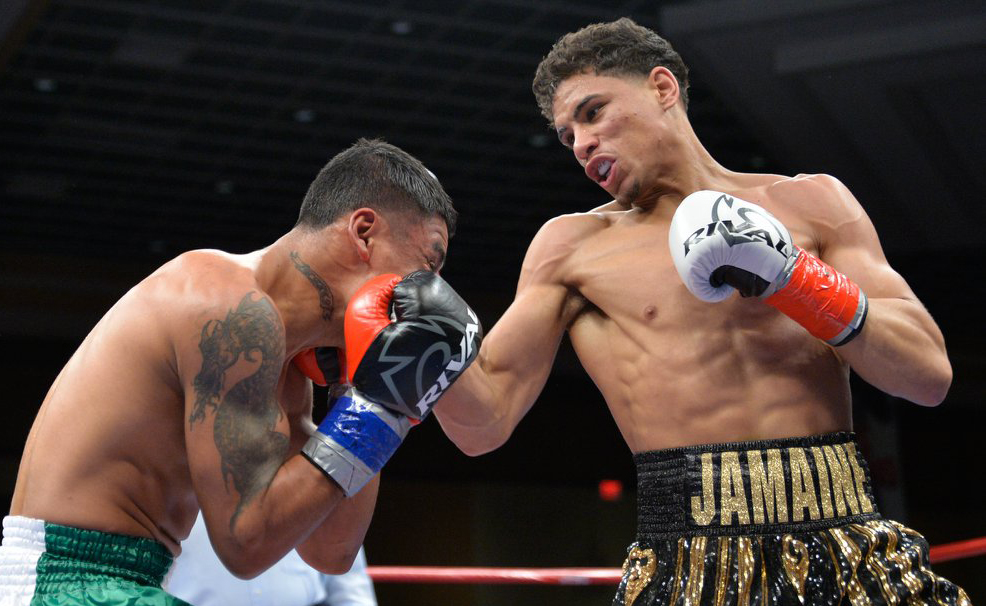 UNDEFEATED WORCESTER, MASSACHUSETTS lightweight Jamaine Ortiz, right, returns Saturday, Feb. 23rd, 2019 in the biggest fight as his career as he faces fellow unbeaten prospect Ricardo Quiroz of California for the vacant WBC Youth World Title in CES Boxing’s season opener at Twin River Casino Hotel in Lincoln, R.I. Quiroz enters with a 10-0 record and five records while Ortiz has won all nine of his professional bouts since making his debut in 2016. The Ortiz-Quiroz title bout is one of 10 on a stacked fight that features two additional championship bouts. 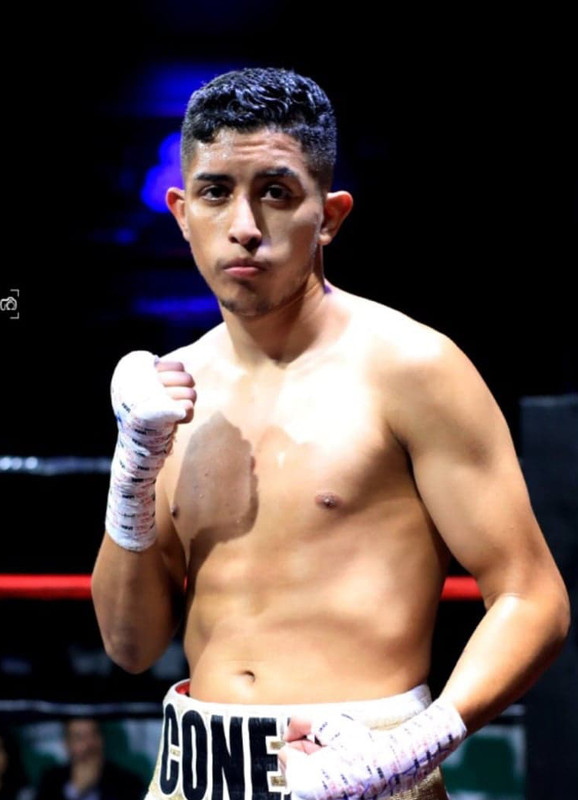 RICARDO QUIROZ OF Oxnard boasts a 10-0 record as he prepares for his Saturday_ Feb_ 23rd_ 2019 showdown against Jamaine Ortiz for the vacant WBC World Youth Lightweight Championship.

— The belt has been worn by some of the sport’s all-time greats, whether it’s pound-for-pound kings from another era or today’s rising stars.

Canelo Alvarez, Timothy Bradley Jr., Danny Garcia, Humberto Soto, Jorge Arce, Leo Santa Cruz — all at one time or another were crowned youth champions by the World Boxing Council, arguably the sport’s most recognizable sanctioning body, and all went on to become world champions, cementing their status as ring legends.

On Saturday, Feb. 23rd, 2019, two undefeated lightweights will have the opportunity to join the long list of former and current youth champions, many of whom, again, have gone on to achieve greatness unmatched by their peers.

For nearly two decades, Oxnard — located 61 miles west of Los Angeles — has been a hotbed for boxers looking to take their careers to the next level. Following a long layoff due to alcohol abuse, former world champion Kelly Pavlik relocated to Oxnard in 2012 to begin the final stretch run of his career, which ended with three consecutive wins. Two-time Lithuanian Olympian Egidijus Kavaliauska packed his bags in 2013 to move to Oxnard to train with Garcia before launching his pro career. Five years later, he’s the reigning NABF welterweight champion with a perfect 21-0 record.

A graduate of Hueneme High School in Oxnard who began boxing at 8 years old, Quiroz recently won his 10th pro fight in Tijuana in December, flattening Luis Cueto in 76 seconds.

“I’m ready for this fight. I’ve been working hard and I’ve been waiting for an opportunity like this since I turned pro,” Quiroz said. “I have a great team with me and I will bring that title home with me to Oxnard.”

The New England-born Ortiz began crafting his skills at the age of 7 at the Worcester Boys & Girls Club at the behest of his father, who told him to take his pent-up aggression — most of which he unleashed at school — and put it to use in the gym. Under the tutelage of regional icon Carlos Garcia, Ortiz boasted a 100-14 amateur record, winning almost every New England tournament in the process, and advanced to the semifinals of the 2006 U.S. Olympic trials in Nevada, where he eventually lost to Gary Antuanne Russell.

A full-time union carpenter who also attends school and takes care of his daughter, Ortiz turned pro in 2016 and has continued to climb the ladder with each fight. In just his fourth bout, he blasted unbeaten Michigan prospect Glenn Mitchell, then took down 16-fight vet Derrick Murray in December of 2017. Eight months ago, his last fight since being sidelined with a minor injury, Ortiz faced the hard-hitting, upset-minded Tyrone Luckey of New Jersey and broke him down within three rounds, scoring the knockout with six seconds to go before the bell.

“I’m looking forward to putting on a great show,” Ortiz said, “and being crowned the new WBC Youth World Champion. It’s a stepping stone toward becoming the pound-for-pound best fighter in the world.”

Ortiz-Quiroz is one of three title bouts on a stacked fight card Feb. 23rd. Tickets for the event start at $47 and are available online at www.cesboxing.com or www.showclix.com or by phone at 401-724-2253/2254. All fights and fighters subject to change.

The WBC Youth Title is as prestigious as it gets for fighters 23 and younger. Time has proven the famed green belt is a legitimate stepping stone to world-title success. From Alvarez to Arce, many notable WBC youth alumni have gone on to reach boxing’s pinnacle. Alvarez, who captured the WBC Youth title as a welterweight in 2009, is boxing’s most recognizable star, a world champion in three different weight classes and one of the richest athletes in professional sports after signing a $365 million deal with video streaming service DAZN in October.

Other former youth title-holders who’ve gone on to win world titles include Erik Skoglund, Julio Cesar Chavez Jr., Kermit Cintron, Devon Alexander, Rodolfo Lopez, Billy Dib and Daniel Ponce De Leon. In an interesting side note, Connecticut’s Chad Dawson, who began his career under the guidance of CES Boxing president and CEO Jimmy Burchfield Sr., joined that list in 2007 when he won the first of four world titles by defeating Tomasz Adamek for the then vacant WBC light heavyweight crown. Dawson also joins fellow Connecticut native Matt Remillard as the only CES fighters to capture WBC youth titles; Dawson won the youth middleweight title in 2003 while Remillard won both the super featherweight and featherweight titles in 2006 and 2008, respectively.

The entire card is headlined by the long-awaited return of female featherweight sensation Shelly Vincent (23-2, 1 KO) of Providence, R.I., by way of New London, Conn., who faces Budapest veteran Edina Kiss (15-9, 9 KOs) in an eight-round rematch of their 2015 bout, won by Vincent by majority decision. Vincent fights at Twin River for the first time since 2016. She is best known for two highly-publicized bouts against Heather Hardy, both of which were nationally televised. The rematch aired live on HBO in October, just the second female boxing bout televised by the network in 25 years.

Regional rivals collide on the undercard as Taunton, Mass., welterweight Marqus Bates (5-2, 3 KOs) faces Jair Ramos (5-2-2, 2 KOs) of Waterbury, Conn., in a six-round bout and super lightweight Nicholas Briggs (2-0, 2 KOs) of Worcester puts his unbeaten record on the line against Andy Aiello (1-1-1) of Bridgewater, Mass., in a four-round bout.

The undercard also features the return of Providence lightweight Michael “Bling Bling” Valentin (4-0, 1 KO), the eclectic 19-year-old who fights despite being born with a rare intestinal disease known as Hirschsprung’s. Valentin endured bullying throughout childhood and fights wearing a colostomy bag. He returns Feb. 23rd one year to the date of his last fight and will dedicate his fifth pro bout to the memory of Seven Bridges, a 10-year-old Kentucky boy who committed suicide after being bullied for wearing a colostomy bag. Valentin faces Philadelphia’s Christopher Burgos (1-3-1, 1 KO) in a four-round bout.

CES Boxing President and CEO Jimmy Burchfield Sr. promoted his first event in 1992 at the Rocky Point Palladium in Warwick, headlined by Ray Oliveira defeating Tomas Rodriguez in the 10-round main event. CES Boxing continued to build champions well into the 21st century; its rich history includes the development of former U.S. Olympian and Providence native Jason Estrada, plus Rhode Island legends Gary Balletto and Peter Manfredo Jr., both of whom rose to fame on The Contender reality television series. Through the years, Burchfield earned several noteworthy awards, among them the NABF Promoter of the Year, in addition to his 2011 induction into the Connecticut Boxing Hall of Fame. Burchfield also promoted Oliveira’s epic 2001 showdown against Ben Tackie at Foxwoods Resort Casino, which set a modern-day CompuBox record for most punches thrown, and guided hard-hitting Polish heavyweight Mariusz Wach to the top of the division, culminating in a world-title showdown against Vladimir Klitschkoin Germany. Years later, Burchfield brought Godfrey to Germany to face WBO world cruiserweight champion Marco Huck and guided Philadelphia’s Hank Lundy to No. 1 in the world in the 135-pound division before an eventual championship bout against pound-for-pound king Terence Crawford at Madison Square Garden.< /div>

VIVE is a UHD+HDR digital linear TV network and live event platform as a service for third-party content creators available globally on every screen in every format. The network comprises niche channels offering experiential lifestyle television series and programs, as well as live sports and concerts, complemented by relevant opt-in interactive advertising. As a pioneer of the TV Revolution and UHD Initiative, VIVE’s mission is to facilitate the creation, proliferation, and monetization of UHD+HDR content to address the demand of the multi-millions of UHD viewers around the globe, and in doing so, establishing the network as the ultimate UHD entertainment destination