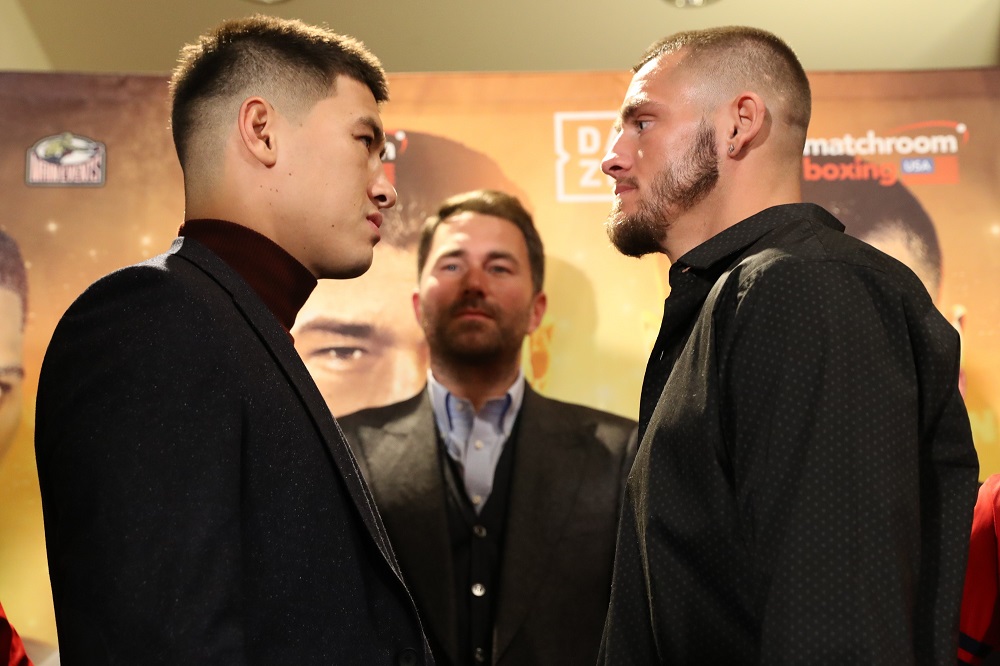 Bivol and Hooker put titles on the line in Turning Stone

TICKETS ARE ON SALE NOW PRICED FROM $49 VIA TICKETMASTER.COM

Bivol puts his WBA Light-Heavyweight title on the line against Joe Smith Jr, the fifth defense of his belt after moving to 15-0 (11KOs) in November, with a comprehensive to a points win over former unified champion Jean Pascal in New Jersey. Bivol’s win over the Canadian was the latest impressive name on his growing CV, following a points triumph over Isaac Chilemba, a final round stoppage of Sullivan Barrera and a highlight real first round KO of Trent Broadhurst.

The Russian star will meet a stern test of his ambitions to unify the division in the shape of Smith Jr (24-2 20KOs) the Long Islander who famously stopped Bernard Hopkins in the Philadelphia legend’s last pro fight in December 2016 and destroyed Andrzej Fonfara inside the opening round of their clash in Chicago six months earlier.

Hooker defends his WBO Junior-Welterweight title against unbeaten challenger Mikkel LesPierre, with Hooker making the second defense of his title following his stunning victory in November, climbing off the canvas in the second round against Alex Saucedo in the challengers Oklahoma City backyard to hand a first career loss to the 24 year old in the seventh round.

Hooker (25-0-3 17KOs), who won the title on the road earlier in the year in Manchester to take Terry Flanagan’s ‘0’ in June, will add upstate New York to his travels as he targets a major hometown defense in the summer. Trinidad and Tobago born Brooklynite LesPierre (20-0-1 9KOs) fights for his first World title against Hooker.

“I want to thank Joe and his team for taking the fight as I think that our styles will make for a great fight – but I will keep my title,” said Bivol. “I’m so happy that my team have come up with a great plan for my future on DAZN, it’s an exciting new chapter in my career and I cannot wait for March 9.

“This is a huge opportunity for me and one I’ll take full advantage of,” said Smith Jr. “This is everything that I’ve worked for, really hard, for my whole life, so I’m going to give it everything I’ve got, and come March 9, I will be 100 per cent ready to take that title home.”

“I can guarantee you that I’m leaving New York City with another ‘W’ in the win column,” Hooker said. “I’m hungry to get back to competing and I’m going to put on a great show so that I can bring my belt back to Dallas for my next bout.”

“We’re very excited that Mo will be fighting in New York, giving him the opportunity to shine in the biggest city in the world,” Roc Nation Sports boxing promoter Dino Duva said. “He had an unforgettable 2018 and we’re confident that he’ll sustain that momentum in 2019.”

“It’s been a long time coming, I’ve been grinding underground out of the public eye – so when I come to fight, I go to work and get the job done,” said LesPierre.

“I took this fight in a heartbeat. I don’t listen to what people say, some might not think I deserve this shot but come March 9, I will show people that I belong at this level. I’ve moved up the rankings and put the work in – there’s no-one out there that works harder than me or wants this more than me. I’ve put myself in position to get to this point and now it’s time to shine.”

Further fights on the undercard will be announced soon.