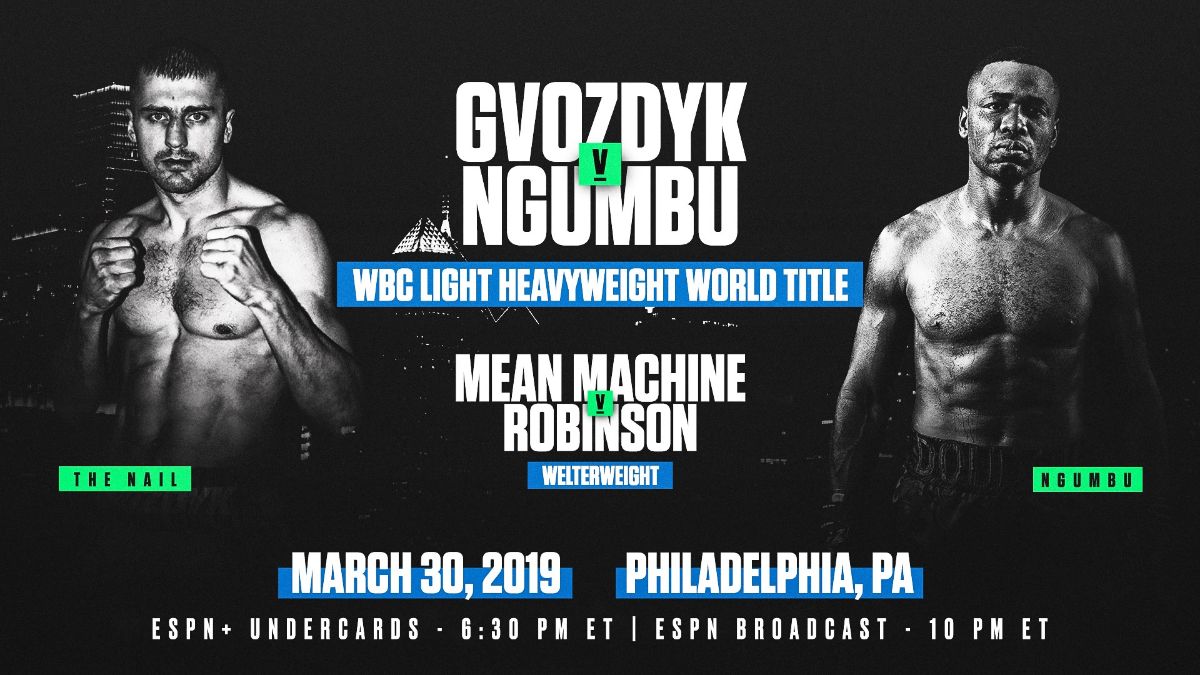 PHILADELPHIA (Feb. 13, 2019) — The Nail and the Mean Machine are ready for their South Philly close-up.

WBC and lineal light heavyweight champion Oleksandr “The Nail” Gvozdyk will make the first defense of his world title against Doudou Ngumbu on Saturday, March 30 at the 2300 Arena. In the 10-round co-feature, Gvozdyk’s stablemate, top welterweight contender Egidijus “Mean Machine” Kavaliauskas, will take on Philadelphia native Ray Robinson.

Gvozdyk-Ngumbu and Kavaliauskas-Robinson will air live on ESPN and ESPN Deportes at 10 p.m. ET/7 p.m. PT. The undercard, including the IBF welterweight title eliminator between Kudratillo “The Punisher” Abdukakhorov and Keita Obara and an appearance by Philadelphia-born heavyweight prospect Sonny Conto (1-0, 1 KO), will stream live on ESPN+ beginning at 6:30 p.m. ET.

“It was a long journey for me to become a world champion, and I plan on showing everyone why I am the best light heavyweight in the world,” Gvozdyk said. “Ngumbu is a tough fighter who I cannot afford to overlook. My goal in 2019 is to unify with the other champions, but before I can do that, I have to take care of business on March 30.”

“It is a great opportunity to face arguably the best light heavyweight fighter in the world. After 12 years and 46 fights in my career with serious opposition, I get my first shot at a major world title,” Ngumbu said. “I have the utmost respect for Oleksandr Gvozdyk, a great champion who took the WBC title in a war against Adonis Stevenson. It is not going to be easy, but I believe I am much more experienced as a pro and I intend to use that to my advantage.”

Gvozdyk (16-0, 13 KOs) captured an Olympic bronze medal for his native Ukraine in 2012 as part of a national team that included two-time gold medalist and future promotional stablemate Vasiliy Lomachenko. He climbed the rankings with dominant wins over the likes of Nadjib Mohammedi and Yunieski Gonzalez and won the WBC interim light heavyweight title last March with a unanimous decision against Mehdi Amar. As the mandatory challenger, he traveled to Quebec City and, behind on two of the three judges’ scorecards, knocked out longtime champion Adonis “Superman” Stevenson in the 11th round. Ngumbu (38-8, 14 KOs) is coming off perhaps the most significant win of his career, a 12-round majority decision over then-unbeaten Yoann Kongolo in May of last year. A native of the Democratic Republic of Congo who is now based in France, Ngumbu will be making his first attempt at a world title.

Kavaliauskas (21-0, 17 KOs) is universally regarded as one of the welterweight division’s top contenders, a massive puncher who rolled through then-beaten Roberto Arriaza in three rounds last November in Oklahoma City. He has knocked out five of his last six foes and is the WBO’s top contender for the belt currently held by pound-for-pound great Terence “Bud Crawford. Robinson (24-3, 12 KOs) is a rangy southpaw boxer who rebounded from back-to-back losses early in his career to Shawn Porter and Brad Solomon to win 13 in a row. In his last bout, Feb. 17, 2018 against Yordenis Ugas, he saw that winning streak come to an end when Ugas scored a seventh-round stoppage.

“I know a lot of Robinson’s fans will be in Philadelphia to cheer him on, but they will leave the 2300 Arena disappointed,” Kavaliauskas said. “This is the year that I fight for, and win, a welterweight world title. I am ready for anybody, including the Crawford-Khan winner. I will show everyone in Philadelphia and watching on ESPN what the ‘Mean Machine’ is all about.”

“I am always excited to come home and put on for my city,” Robinson said. “Every fight is a risk, but the higher the risk, the bigger the reward.”

Abdukakhorov (15-0, 9 KOs), a native of Uzbekistan who now lives in Kuala Lumpur, Malaysia, went 2-0 in 2018, including a convincing 12-round unanimous decision over Laszlo Toth in defense of his WBC silver welterweight belt. Obara (20-3-1, 18 KOs), who hails from Tokyo, is one of the division’s heaviest punchers. He knocked out Alvin Lagumbay in three rounds last August, a measure of revenge over the man who knocked him out in two rounds less than four months earlier.

Use the hashtags #TheNail and #MeanMachine to follow the action on social media.