Christy Martin’s May 9th Fight Night – “Bull CityBeatDown 3” At The Durham Armory In Durham, North Carolina Is stacked With Local Favorites And Some Of The Best North Carolina Boxing Talent 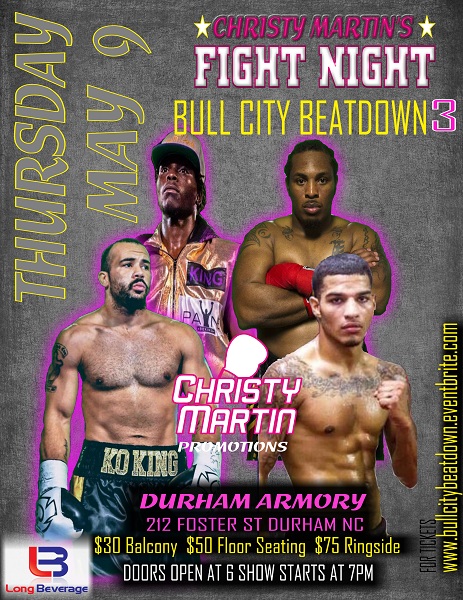 Durham, North Carolina (April 3) – How does the two time North Carolina promoter of the year and person who happens to have had the 2018 North Carolina boxing event of the year ensure she is in the running for 2019 awards?  Well, if you are Christy Martin, it’s easy.  You put together a Fight Night at the Durham Armory in Durham, North Carolina call it the “Bull City Beatdown 3” then stack the card with local favorites who just happen to be some of the best and most exciting fighters in North Carolina.  “We might not have the best matchups from top to bottom, but wow, we have some fighters that bring it every time they get into the ring and they are very popular with local boxing fans,” says a modest Christy Martin.

The “Bull City BeatDown 3” does not stop with the stacked talent.  In a main event, which on paper is worthy to be not just North Carolina but national fight of the year, Jamaal “Da Shoota” Gregory 5-1 (2 KO’s) proves he will fight any “real contender” when he battles undefeated and highly praised prospect Edvis “All Hands On Deck” Galloway 1-0 (1 KO).

Gregory, who is from Charlotte, North Carolina,  has an incredible amateur background and as a pro is undefeated fighting in North Carolina.  Gregory’s only pro loss was to rising superstar Marcel Rivers in Rivers’ hometown of Philadelphia.  Gregory sees similarities in his May 9 fight with Galloway and his fight with Rivers, but this time Gregory will prove he is the “baddest” man on the block.  “When I fought Rivers, I took the fight on one week notice.  He was the boogie man.  He KO’d everyone he faced.  He didn’t KO me and we had a good war.  I proved a lot to myself and shut some mouths as well.  With Edvis, there is a lot of talk about how strong he is and how he is this and that.  Well, on May 9th, we will see, and I will be the winner,” says an excited Gregory.

Galloway, who has been in boxing since 2002 and had a very successful amateur career, made his pro debut in August of 2018.  After knocking out Xavier Graham in front of his idol Roy Jones Jr. and a throng of excited North Carolina boxing fans, the Wilmington native has earned the current title as the “Boogie Man” because he has found it hard to get anyone in the Jr Welterweight division to fight him.  “I applaud Jamaal Gregory for taking this fight.  We are in Cincinnati preparing like this is a title fight.  We will be prepared for anything and ready to win,” says a relaxed Galloway.

Tickets to Christy Martin’s Fight Night – “Bull City BeatDown 3” event are priced at $30 for Balcony, $50 Floor Seating, and $75 Ringside.  Tickets will be available online by going to www.bullcitybeatdown.eventbrite.com. Tickets will also be available by contacting your favorite fighter or by calling (704) 309-1777.

Christy Martin Promotions presents a stacked night of boxing on Thursday, May 9, 2019, at the Durham Armory located at 212 Foster Street in Durham, North Carolina.  Doors Open at 6:00 PM and the first bell is at 7:00 PM.

This thrilling event is punctuated with a fight of the year worthy main event as exciting Jr Welterweight prospects Jamaal Gregory and Edvis Galloway battle for North Carolina supremacy.

Tickets to Christy Martin’s Fight Night – “Bull City BeatDown 3” event are priced at $30 for Balcony, $50 Floor Seating, and $75 Ringside.  Tickets will be available online by going to www.bullcitybeatdown.eventbrite.com. Tickets will also be available by contacting your favorite fighter or by calling (704) 309-1777.