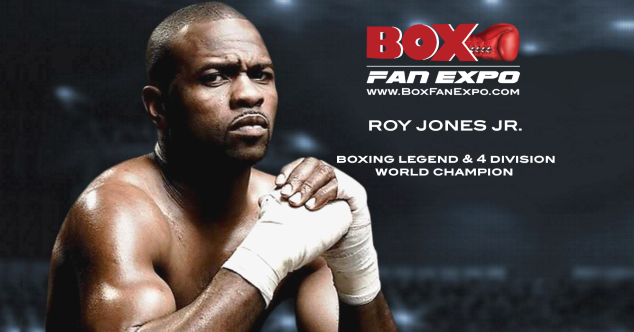 Las Vegas (April 23, 2019) – Boxing legend & four division world champion Roy Jones Jr. has confirmed that he will appear, have a booth and hold a meet and greet with his fans at the fifth annual Box Fan Expo on Saturday May 4, 2019 at the Las Vegas Convention Center. The Expo is open from 10 a.m. to 5 p.m., during Cinco De Mayo weekend. The Boxing Expo will also coincide with the highly anticipated fight between Canelo Alvarez vs Danny Jacobs, that will take place later that evening at the T-Mobile Arena.

Tickets to the Box Fan Expo are available at Eventbrite –

Jones will make his 2nd appearance at this years’ Expo and will be signing gloves, photos, personal items and also have merchandise for sale for fans to enjoy. Boxing Fans will have an opportunity to also take pictures with this Boxing living legend, considered by many as one of the greatest Pound for Pound, and best Boxer of all time.

About Roy Jones Jr.
Roy Jones Jr. is an American professional boxer who has captured numerous championships in the Middleweight, Super middleweight, Light heavyweight and Heavyweight divisions. He is the only boxer in history to start his career as a junior middleweight, and go on to win a heavyweight title. He is also noted for holding the WBC, WBA, IBF, IBO, NABF, WBF, and IBA light heavyweight championships; a record seven belts at the same time. Jones left his mark in boxing history when he won the WBA heavyweight title, becoming the first former middleweight champion to win a Heavyweight title in 106 years. As of February 2018, Jones holds the record for the most wins in unified light heavyweight title bouts in boxing history, at twelve. The Ring magazine named Jones the Fighter of the Year in 1994, and the World Boxing Hall of Fame named him the Fighter of the Year for 2003. He is also a three-time winner of the Best Boxer ESPY Award (1996, 2000, and 2003). Jones was named “Fighter of the Decade” for the 1990s by the Boxing Writers Association of America.

About Box Fan Expo
Box Fan Expo is the ultimate boxing fan experience event, which allows fans to meet-and-greet boxing superstars of today, current and former world champions, legends of the sport and other boxing celebrities. Fans can expect to experience various interactions such as autograph and photos sessions, FaceOff with your favorite boxers, pictures with the Ring Card Girls, Live DJ Music, chance to win prizes, purchase merchandise and memorabilia from different booths Exhibitors, “ALL UNDER ONE ROOF”. You won’t want to miss this must-attend Expo!

Exhibitors include: boxing promoters, gear, apparel, equipment, energy drinks, supplement products, broadcasting media, sanctioning bodies, and other companies who wish to participate will once again have a chance to showcase their brand to fans and the boxing industry.

Throughout the next few days leading up to the event, there will be more updates on the many stars that will commit their appearance at the Boxing Expo. And for anyone in the Boxing industry or other Exhibitors (non-industry), who would like to be involved and reserve a Booth,

WE WILL HAVE MANY MORE ANNOUNCEMENTS OF BOXING CELEBRITIES AND ATTENDEE’S IN THE COMING WEEKS. THANK YOU