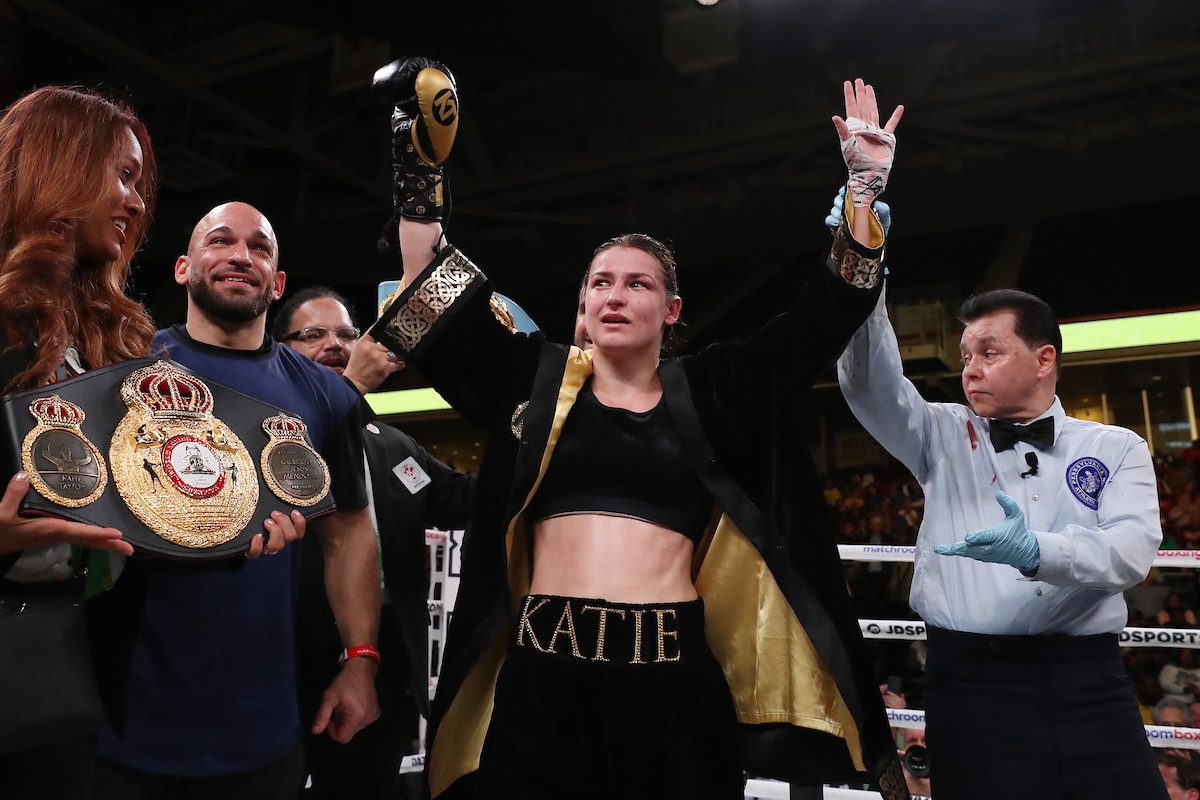 TAYLOR – YOU COULDN’T WRITE A BETTER SCRIPT, THIS IS A DREAM!
Irish sensation aims for greatness in New York

Katie Taylor says her undisputed Lightweight World title clash with Delfine Persoon at Madison Square Garden in New York on Saturday June 1, shown live on DAZN in the US and Sky Sports Box Office in the UK, will be the “toughest fight” of her career.

Taylor added the WBO title to her IBF and WBA crowns in March, halting Brazil’s Rose Volante in the ninth round in Philadelphia, and now the Irish sensation has the opportunity to fulfil her goal of becoming undisputed ruler when she meets long-reigning WBC champion Persoon in a landmark moment for women’s boxing.

Persoon has held the WBC strap since 2014, making nine defences during that time, and will look to cement herself as the number one female 135lbs fighter on the planet when she fights in America for the first time next week. Taylor has prepared for ten hard rounds with her Belgian opponent who holds an impressive career record of 43 wins and just one loss.

“It’s great to have the opportunity to have the chance to become the undisputed champion,” said Taylor. “Every day in camp has been 100% focused on the task at hand so I won’t sit back and think about it until I’ve actually achieved it as that’s what I am like.

“The chance to fight for the four World titles and the Ring Magazine belt at the Mecca of boxing, MSG, I don’t think you could write a better script, it’s an absolute dream. Persoon is recognised as one of the best in the world pound-for-pound and has been the WBC champ now for over five years so it’s the best against the best. This is huge for women’s boxing.

“This fight is going to be the toughest of my career so far, Delfine is a fantastic champion, she’s got 43 wins and just one loss, she’s been a long-reigning champion and she’s a fantastic person. I know that this is going to be tough and that’s why I’ve trained so hard and had a tough camp as I know that this is so big for me, not just for the immediate success but for my future plans.

“I think it’s going to be a really hard fight. I’ve watched clips of her and she’s very tall and awkward, she punches non-stop for the ten rounds and I think it’s going to be a very physical fight. It’s a huge challenge but the one that I’ve wanted. She’ll bring the best out of me as I have the utmost respect for her and we’re going to lay it all on the line and may the best girl win. The famous green belt and the Ring Magazine belts being on the line is just amazing.”

Tickets for the huge night of World title action in New York are on sale now via Madison Square Garden and StubHub (www.stubhub.com)

Tickets can be purchased at the Madison Square Garden Box Office, all Ticketmaster outlets, Ticketmaster charge by phone (866-858-0008) and online at www.ticketmaster.com or www.MSG.com.

Official Ticket and Travel Packages, including the opportunity to travel on the Official Charter Plane, are available to purchase via Sportsworld (www.sportsworld.co.uk) Prices start at £1,095. Reserve your seat today.