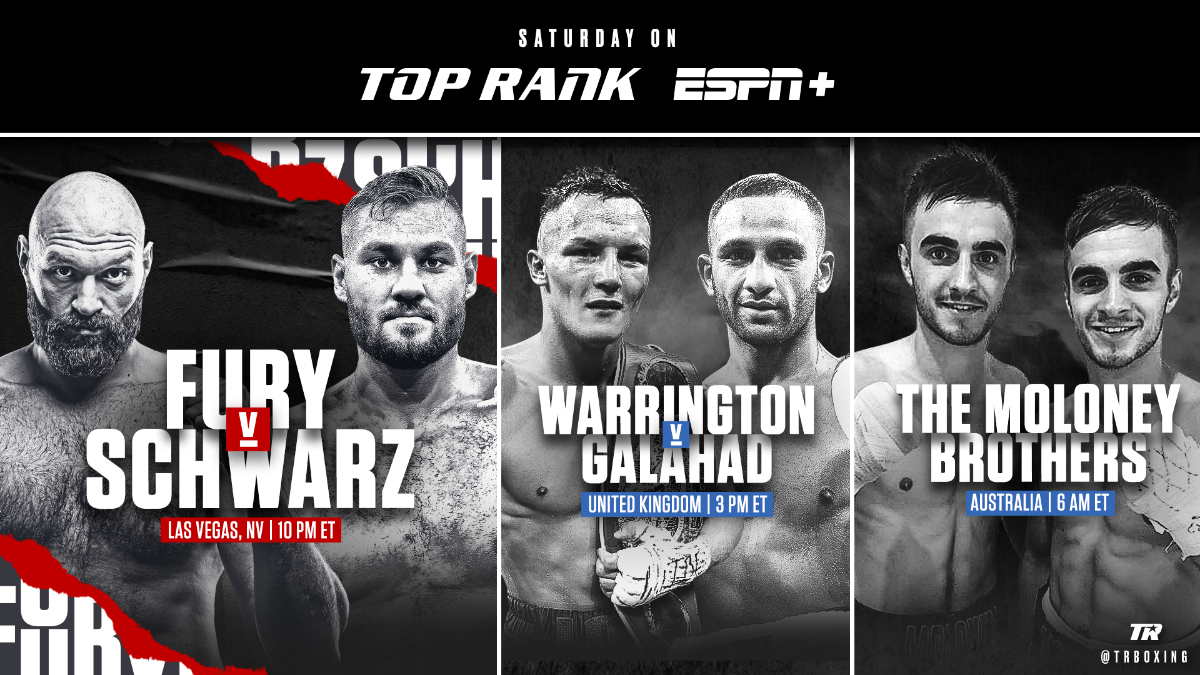 The action starts on ESPN+ bright and early, at 6am ET when Australian twin brothers Andrew Moloney (19-0, 12 KOs) and Jason Moloney (18-1, 15 KOs) are both in action from Seagulls Stadium, Tweeds Head, Australia. The 28-year-old twin rising stars, will both take the ring, as Jason (no. 6 in ESPN.com’s Bantamweight rankings) will defend his WBA Oceania Bantamweight title against Tanzania’s challenger Goodluck Mrema (23-4, 13 KO), while brother Andrew (ESPN.com’s no. 10 ranked Junior Bantamweight) faces off against former Tanzanian Champion Selemani Bangaiza (15-5, 5 KO). Andrew is coming off a significant victory in March, having demolished the highly rated Chilean Miguel Gonzalez on Gonzalez’ home turf in San Francisco de Mostazal.

At 3pm ET the action moves to England for a battle of unbeatens squaring off for the IBF Featherweight Championship, as defending champion Josh Warrington (28-0, 6 KOs) and unbeaten challenger Kid Galahad (26-0, 15 KOs) meet in Leeds.  Warrington (ranked no. 2 in ESPN.com’s Featherweight rankings) will be fighting in front of his hometown crowd and defending his title for the second time, having taken the title from Lee Selby in May 2018 and defended it in December in an intense clash with Carl Frampton. He faces Galahad (ranked no. 8 by ESPN.com), the mandatory challenger following an October defeat of Toka Kahn Clary in Boston. Born in Qatar, Galahad has lived most of his life in Sheffield, England, making this a Yorkshire Derby.

The big day of boxing culminates with Fury (27-0-1, 19 KOs), the self-proclaimed “Gypsy King” and one of boxing’s most compelling fighters, meeting Schwarz at the MGM in Grand Las Vegas.  The fight marks the first in a multi-fight agreement announced in February, in which Fury’s fights are co-promoted by Top Rank and Frank Warren’s Queensberry Promotions. Fury captured the lineal heavyweight title on Nov. 28, 2015, with a unanimous decision over longtime champion Wladimir Klitschko. That win catapulted him to worldwide fame, but a host of personal demons threatened to end his career before he could defend his title. He blew up to 400-plus pounds, only to author a 2018 comeback that ranks among the great redemption stories in sporting history. In the third fight of his comeback, Fury fought WBC champion Deontay Wilder to a disputed draw in a sensational fight of the year candidate.

The co-feature for the evening’s fight card will see a light heavyweight clash between former world title challengers Jesse Hart (25-2, 21 KOs) and Sullivan Barrera (22-2, 14 KOs). A full seven-bout undercard for the Fury-Schwarz fight will be carried live on ESPN2 and ESPN Deportes, beginning at 7p.m. ET.

In just over a year since its launch, ESPN+ has already become a must-have destination for boxing fans, having already carried 21 exclusive world title fights, across 12 different weight classes and the four major sanctioning bodies (IBF, WBA, WBC and WBO).  ESPN+ also has thousands of hours of the greatest boxing matches of all time, on-demand, from the ESPN Big Fights Library and Top Rank Boxing Library.

Programming on ESPN+ includes hundreds of MLB and NHL games, exclusive UFC, Top Rank boxing and PFL fights and events, top domestic and international soccer, thousands of college sports events (including football, basketball and other sports), Grand Slam tennis, international and domestic rugby and cricket, new and exclusive series, acclaimed studio shows and the full library of ESPN’s award-winning 30 for 30 films. Fans can subscribe to ESPN+ for just $4.99 a month (or $49.99 per year) and can cancel at any time.