Star Boxing is pleased to announce the card for CATSKILLS CLASH at Resorts World Catskills on June 28th. The much-anticipated night of fights is expected to be the first of many professional boxing cards at Resorts World Catskills. Fans will enjoy an ABO America’s Championship Triple Header, and a night of fights featuring five undefeated prospects.

2018 Connecticut Boxing Hall of Fame Fighter of the Year, and undefeated super lightweight, “ACTION” ANTHONY LAUREANO (Hartford, CT 10-0 3KO’s) will look to make it eleven straight victories as he takes on DIEUMERCI “ELEPHANT” NZAU (11-8 8KO’S), fighting out of Silver Spring, Maryland, by way of Kinshasa, Democrat Republic of the Congo. Laureano has looked particularly impressive in his past three victories, earning wide unanimous decisions, highlighted by a disciplined body attack, and an incredible work rate. Nzau’s previous three opponenets have a combined record of 37-4-1 and he hopes that a win against a fighter with the caliber of Laureano will put him on track for even bigger fights in the future. This bout is for the ABO America’s Super Lightweight Championship and is scheduled for 8-rounds.

Power punching East Hartford standout, RICHIE “POPEYE THE SAILOR MAN” RIVERA (11-0 10KO’s) will take on BRIAN “MVP” HOWARD (14-2 11KO’S) fighting out of the fighting city of Philadelphia, by way of Atlanta, Georgia. Rivera has devoured his competition with incredible punching power, which led to Rivera becoming the ABF Continental America’s Cruiserweight and UBF All America Light Heavyweight Champion. Rivera hopes to add the ABO America’s Cruiserweight Championship to his trophy case, but Howard has other plans. The Georgia native is coming off of a big first round KO of Garret Wilson and hopes to repeat his success on June 28th. This is a scheduled 8-round cruiserweight bout.

Making his United Stated debut, #2 rated Irish welterweight sensation, DYLAN “THE REAL DEAL” MORAN (Ireland, 10-0 5KO’s) will look to impress the American fans with his quick hand speed, and power, as he takes on, DENNIS OKOTH (2-2-1 1KO) fighting out of Silver Spring, Maryland, by way of Siaya, Kenya. Moran, having fought in Mexico, the famous York Hall, in Britain, and in his home country of Ireland, is no stranger to getting the job done on the road. The amateur boxing standout and the former kickboxing world champion, Moran, hopes to return to Ireland with the ABO America’s Welterweight Title. This is a scheduled 8-round welterweight bout.

The undercard will feature ROBERT DURAN JR. (3-0 2KO’s), son of the legendary Roberto Duran, who is coming off of a fantastic win at Turning Stone Resort Casino, earlier this month against the previously undefeated Jonathan Pierre. Duran Jr. will face off against JERMAINE CORLEY (1-6 1KO) of Rochester New York. This will be a 4-round welterweight scrap. In the opening bout of the evening, LAWRENCE KING (1-0 1KO) who works as the Monroe County Sheriff’s Deputy, will be making his second professional appearance against PEREZ AUGHTRY (0-1) of Buffalo, in a 4-round cruiserweight bout.

Star Boxing CEO JOE DEGAURDIA had this to say about the ABO Triple Header, “Boxing fans are in for a real treat on June 28th, as we are featuring three extremely skilled, young, and up and coming prospects. Laureano has never disappointed as he always brings all out action from the opening to the closing bell. Rivera has only ever been in exciting fights, and with power in both hands, you will not want to miss one second of this bout. Moran, an Irish standout, is making his US debut, and we have very high hopes for him and what the future holds. This will be a fun night of fights, be sure to get your tickets now.” 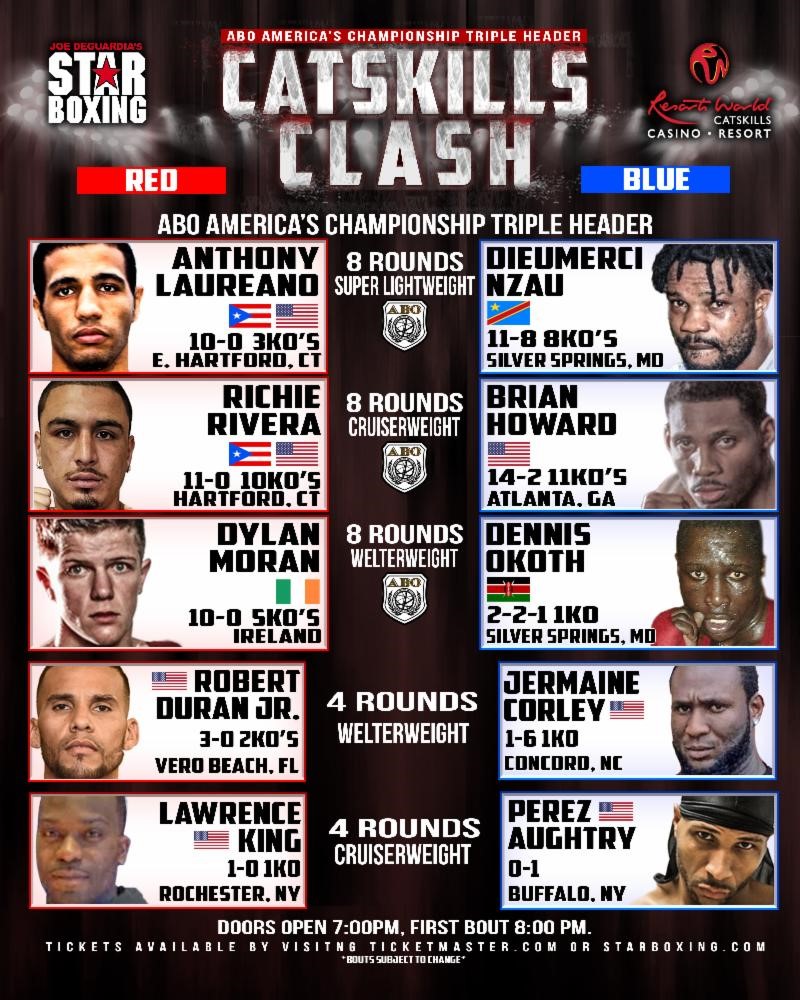 On June 28th Star Boxing brings boxing back to the Catskills at Resorts World Catskills for an ABO America’s Championship Triple Header. The thrilling night of fights will include three undefeated rising stars, looking to claim their stake as ABO Champion.

Undefeated, “Action” Anthony Laureano (10-0 3KO’s) of East Hartford, Connecticut will bring his come forward, all action style to Resorts World in search of his 11th consecutive win, in an effort to take home the ABO America’s Super Lightweight Title. Every time the 2018 Connecticut Boxing Hall of Fame Fighter of the Year steps in the ring, it’s guaranteed to bring the crowd to their feet.

Undefeated Irish sensation, Dylan “The Real Deal” Moran (10-0 5KO’s), will be making his United States debut as a large contingent of Irish fans will be watching the #2 rated Irish welterweight take his chance at the ABO America’s Welterweight Title. Moran, a 6 time Irish National champion, has been creating extreme buzz in Irish boxing, and is ready to preform under the bright lights of Resorts Word Catskills on June 28th.

Undefeated power punching cruiserweight, Richie “Popeye The Sailor Man” Rivera (11-0 10KO’s) will be vying for the ABO America’s Cruiserweight Title in his first bout under the Star Boxing banner. Always bringing excitement whenever he fights, Rivera tends to finish the night before the distance, so he sure to get to Resorts World Catskills early, to not miss this Hartford, Connecticut product, put on a show for boxing fans.

All media crednetials must be submitted by MONDAY JUNE 24, 2019 at 8:00PM. All late credentials may not be conisdered. Only accredited media will be considered. Apply, HERE.