ENTIRE CARD CAN BE SEEN LIVE ON FITE.TV PPV

The entire Catskills Clash card weighed-in today at Resorts World Catskills, ahead of tomorrow night’s fights. Tomorrow night’s entire card, including all three featured ABO Title bouts will be available via FITE.TV PPV.  FITE, the world leader in the digital distribution of combat sports will stream the event live on the http://www.FITE.TV website, FITE mobile apps for iOS, Android, and the FITE channels of Amazon Fire, Android, Apple TV, and Roku on a PPV basis.  The FITE PPV will stream all five bouts and be available for just $9.99.  Check availability in your area by going to the FITE.tv website.

If you could not catch the weigh in LIVE, watch HERE. 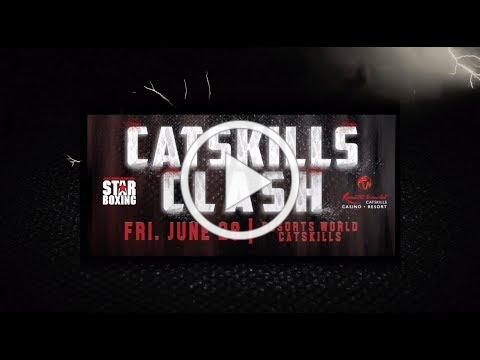 On June 28th Star Boxing brings boxing back to the Catskills at Resorts World Catskills for an ABO America’s Championship Triple Header. The thrilling night of fights will include three undefeated rising stars, looking to claim their stake as ABO Champion.

Undefeated, “Action” Anthony Laureano (10-0 3KO’s) of East Hartford, Connecticut will bring his come forward, all action style to Resorts World in search of his 11th consecutive win, in an effort to take home the ABO America’s Super Lightweight Title. Every time the 2018 Connecticut Boxing Hall of Fame Fighter of the Year steps in the ring, it’s guaranteed to bring the crowd to their feet.

Undefeated Irish sensation, Dylan “The Real Deal” Moran (10-0 5KO’s), will be making his United States debut as a large contingent of Irish fans will be watching the #2 rated Irish welterweight take his chance at the ABO America’s Welterweight Title. Moran, a 6 time Irish National champion, has been creating extreme buzz in Irish boxing, and is ready to preform under the bright lights of Resorts Word Catskills on June 28th.

Undefeated power punching cruiserweight, Richie “Popeye The Sailor Man” Rivera (11-0 10KO’s) will be vying for the ABO America’s Cruiserweight Title in his first bout under the Star Boxing banner. Always bringing excitement whenever he fights, Rivera tends to finish the night before the distance, so he sure to get to Resorts World Catskills early, to not miss this Hartford, Connecticut product, put on a show for boxing fans.