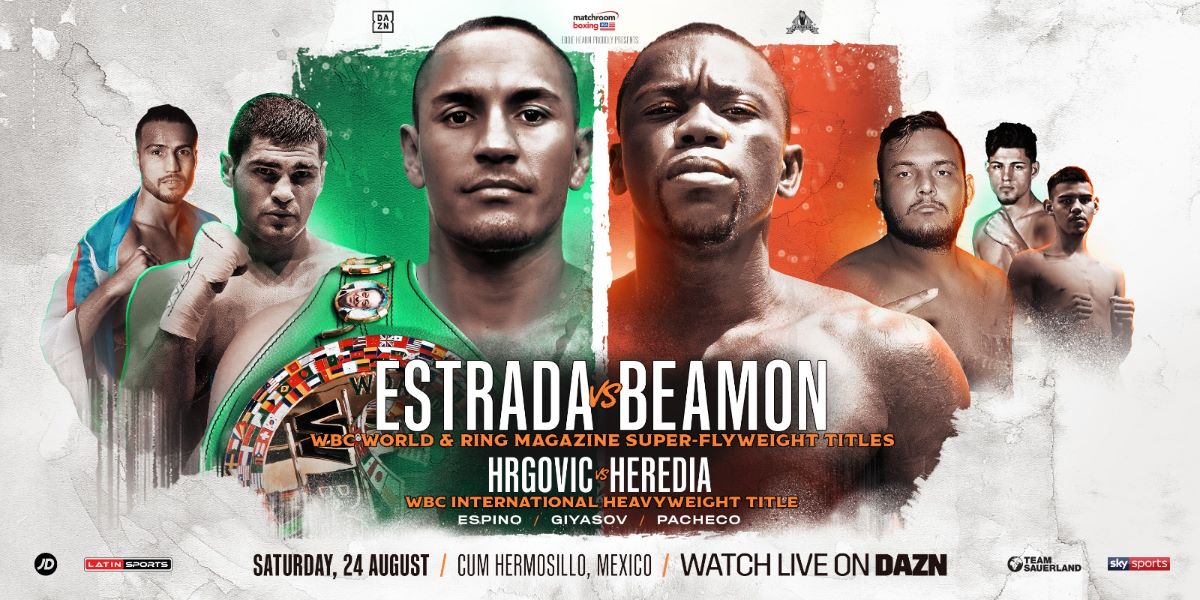 Juan Francisco Estrada will defend his WBC and Ring Magazine Super-Flyweight titles against Dewayne Beamon at the Centro de Usos Múltiples in Hermosillo, Mexico, on Saturday August 24, live on DAZN in the US and on Sky Sports in the UK.

Estrada (39-3 26 KOs) became a two-weight World champion by ripping the belts from Srisaket Sor Rungvisai in April to exact revenge in a classic as they rematched in The Forum in LA where they had provided a fight of the year contender in February 2018.

Pound-for-pound king ‘Gallo’, who thru his company Latin Sports recently signed a promotional deal with Matchroom Boxing USA and Zanfer Promotions, will make a first defense of his crown on a return to Mexican soil after two and a half years of fighting in the States, and welcomes American Beamon to his home patch in Sonora.

“We have a risky defense against the American Dewayne Beamon, he is fast of hands and have a front style, but that is good to provide a great fight to all the fans in the world. Thanks to Matchroom Boxing USA, Zanfer Promotions, DAZN and Latin Sports for making this fight possible.”

Estrada and Beamon come face-to-face in press conferences in Mexico City and Hermosillo this week, and Beamon (16-1-1 11 KOs) enters the bout on the back of exacting revenge for his sole loss on his record in October. The North Carolina native will not be deterred by fighting in Hermosillo having relocated to Mexico for a two-year stint in order to find stiffer competition and now the 33 year old gets his first World title shot, and he’s determined to shock the world against the pound-for-pound superstar.

“I’m very excited for getting this World title shot against one of the best pound-for-pound fighters in the world,” said Beamon. “It will be a memorable fight and I will surprise everyone on August 24 and accomplish my dream of being a World champion”.

“When they offered me the fight against Estrada I had no doubts in accepting it. Thanks to Matchroom Boxing USA, DAZN and Zanfer Promotions for looking at me as the challenger for Estrada. That night everyone will know my name, the new World champion, Dewayne Beamon.”

A stacked card in support of Estrada’s clash with Beamon sees unbeaten Heavyweight sensation Filip Hrgovic (8-0 6 KOs) make a quick return to the ring following his explosive first round KO win in Maryland in May over Greg Corbin. The Croatian star will be aiming for KO number seven in Mexico and defends his WBC International title against an in-form Mexican in the shape of Mario Heredia (16-6-1 13 KOs) who enters the bout on the back of a split-decision win over former World title challenger Samuel Peter in April.

“I’m looking forward to fighting Mario Heredia in Mexico,” said Hrgovic. “I’m expecting a good fight and I will train hard for him like I do for every opponent.

“Mexico is not a new place for me if you look at my amateur career. I have already fought twice in Mexico in the World Series of Boxing back in 2013 and 2014, and both fights I won, so I’m really looking forward to fighting there again.

“I was very satisfied with how my first fight for DAZN in American went. It couldn’t have gone better for me really. I introduced myself in a special way.

“Gregory Corbin was a tough fighter and nobody expected a KO in the first-round. I showed the American audience what they can expect in my upcoming fights. I was only in the ring 60 seconds last time. We will see how long I spend in the ring this time, but I don’t want to underestimate anybody.

“I had three weeks off after my last fight and it was good to rest and recharge my batteries. I have already started my camp in Zagreb and will continue in Miami. I train hard in Zagreb with Yousef Hassan and Igor Cordas, while Pedro Diaz is waiting for me in Miami with my final tactics.

“I’m excited to fight in front of the Mexican fans. I know they are huge boxing fanatics and I’m sure they will appreciate my style, no doubt about that.”

An announcement on ticket on-sale dates and prices will be made later this week.