Fighters and Star Boxing promoter JOE DEGUARDIA took to the podium to speak on their upcoming bouts and the excitement behind this Friday’s, night of fights.  This will be the 35thedition of the acclaimed series at The Paramount.  Friday nights card features some of The Paramount fan favorites including, DANNY “EL GALLO” GONZALEZ,in the main event, as well as, TYRONE “PRETTY BOY” JAMES in the co-feature and Brooklyn native and pro-debuter, JUSTICE “LIL NASTY” BLAND on the undercard.

Star Boxing promoter Joe DeGuardia kicked off the event by speaking on the thrilling card that is set to go this Friday, “We have a whole host of fights that should interest fans as always here at The Paramount.”  DeGuardia continued The Paramount has seen some boxing greats develop through the “Rockin’ Fights” series in Joe Smith Jr., Chris Algieri and Cletus Seldin, and I believe we have some of the next stars in boxing on this card.”

In the co-feature, undefeated super welterweight, Tyrone James will be making his eighth appearance at The Paramount in a 6-round bout against RAY OLIVEIRA JR..  James is ready to bring the energy Friday night, “Since we are still in July there is going to be fireworks.  I’m coming for the knockout and if it happens it happens, but I promise you will see a great show. I want to thank God, Star Boxing and Joe DeGuardia for this opportunity.”

Finally, super bantamweight Justice Bland took to the podium. Bland will be making his pro-debut against Bronx native, RAFAEL CASTILLO in a 4-round bout.  As an amateur standout, Bland was not shy about the feeling of making his pro-debut, “I have jitters, but they are good jitters.  I am ready to show everyone what I have.  I am a Brooklyn kid, and I am just happy to be on this card and I am blessed to be here.”

In the opening bout of the night, JUAN MANCILLA of East Hampton will be taking on JERMAINE CORLEY of Mount Vernon in a 4-round super welterweight bout that is set to be a brawl from the opening bout.  Also on the card, is the return of highly touted prospect, and amateur standout RONNIE AUSTION who will be challenging for the ABO America’s Welterweight Championship against DENNIS OKOTH.
GET YOUR TICKETS TO “ROCKIN’ FIGHTS” 35 TODAY!
FIGHT: FRIDAY, JULY 19TH, 2019
$50, $60, $100, $150, $200
BUY TICKETS HERE!
FIGHT NIGHT LIVE STREAM:
Friday night’s entire card, will be available via FITE.TV PPV.  FITE, the world leader in the digital distribution of combat sports will stream the event live on the http://www.FITE.TV website, FITE mobile apps for iOS, Android, and the FITE channels of Amazon Fire, Android, Apple TV, and Roku on a PPV basis.  The FITE PPV will stream all five bouts and be available for just $14.99.  Check availability in your area by going to the FITE.tv website. Pre-order Rockin’ Fights 35, HERE.

For media use, please tag @StarBoxing 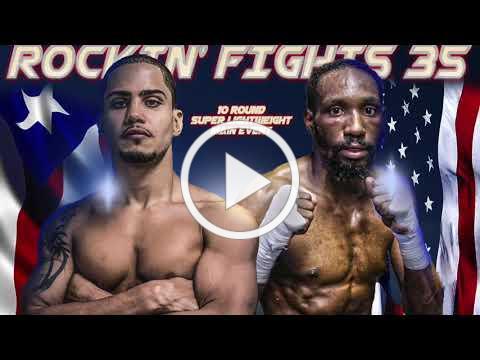 STAR BOXING is excited to return to its renown Long Island venue, The Paramount, on July 19th, for another thrilling night of “Rockin’ Fights.” The 35th edition of the acclaimed fight series yet again brings highly talented New York centric fighters, with an international flair to The Paramount. The main-event

For more information on Star Boxing, visit official website: www.StarBoxing.com
ABOUT THE PARAMOUNT:

Since Opening in September 2011, The Paramount has become a top live entertainment venue.  Located in Huntington, Long Island, New York; The Paramount – in concert with TD Bank, America’s Most Convenient Bank® – hosts a variety of concerts, comedy, boxing and other special events. Booked by Live Nation and utilizing Ticketmaster ticketing; The Paramount hosts an average of 200 events per year. In less than 5 years since opening, The Paramount has quickly established itself as the premier live venue on Long Island – the 20th largest U.S. media market (*2.5M HH-Arbitron: Nassau/Suffolk MSA).  Pollstar Magazine ranked The Paramount as the #11 club venue worldwide (*Att. Q3 ’15). With almost 70k+ Facebook fans & 10k+ Twitter followers, the venue was also ranked by Billboard Magazine as the “23rd Hottest Club” in 2014.

Founded in 1889, Modell’s Sporting Goods is the local family sporting goods destination that provides a convenient and compelling shopping experience for the athlete and fan in all of us.  Modell’s offers customers an assortment of top brands in sporting goods equipment, footwear and active apparel for every level of play year round.   The retailer operates 153 stores located in New York, New Jersey, Pennsylvania, Connecticut, Rhode Island, Massachusetts, New Hampshire, Delaware, Maryland, Virginia and Washington, DC.  In addition, visit, http://www.Modells.com, which services customers all over the country.

ABOUT THE TUDOR ADVISORY GROUP:

The Tudor Advisory Group provides strategic consulting services, coaching, and education in the areas of organizational improvement (Lean/Six Sigma), organizational development, and customer experience/engagement across industries for businesses, not-for-profit companies, and healthcare agencies of all sizes.   Our experts have over 25 years of experience in the area of organizational transformation, partnering with companies to reach their strategic goals and objectives. We believe in knowledge transfer where we ensure the organization is self-sufficient prior to the end of the engagement. For further information please contact Alan Cooper at (212) 653-0086.

ABOUT THE INN AT FOX HOLLOW:
Nestled upon 8 private acres of Long Island’s north shore is the Fox Hollow, which features a state of the art event venue, fine dining restaurant and an all-suite luxury boutique hotel. Owned & operated by the Scotto Brothers, their Above & Beyond philosophy in providing each & every guest with superior services and amenities is paramount. Visit the Fox Hollow online at www.TheFoxHollow.com & www.TheInnAtFoxHollow.com
ABOUT WBAB:
WBAB 102.3 is the home of Long Island’s Classic Rock anchored by their Long Island Rock ‘N’ Roll Morning Show with Roger and JP.  For more information or to listen online, visit their website at
www.wbab.com and follow them on Facebook.com/1023wbab
and on Twitter @1023wbab.
ABOUT CAMELOT LIMOUSINE:

Official Sponsor of the Paramount Boxing Series, Camelot Limos is a family owned and operated business located in Nassau County, with over 25 years of professional experience; serving satisfied clientele since 1984. The owners of Camelot Specialty Limos are very active in the business and play a major role in the company’s day-to-day operations. Camelot Specialty Limos, Inc. is an Accredited Member of the Better Business Bureau.  www.camelotlimo.com

ABOUT TIEDIN MEDIA:
TiedIn Media is a talented, professional, and experienced Long Island web development and marketing agency. We create experiences that elevate brands, create connections, and help businesses flourish. We strive to provide the opportunity for businesses to expand across all marketing platforms, connecting them with their customers and building profitability.
We are well prepared to handle any of your business’ needs, whether you are a small, new business or older and more established. At TiedIn Media we can help you with your branding by redesigning or creating your web presence, print marketing, and even social media sites so that every piece of marketing material works meticulously with your brand’s essence and perfectly communicates your mission.https://tiedinmedia.com/
STAR BOXING INC.
STAR BOXING INC | PR@STARBOXING.COM | 718 823-2000 | www.StarBoxing.com