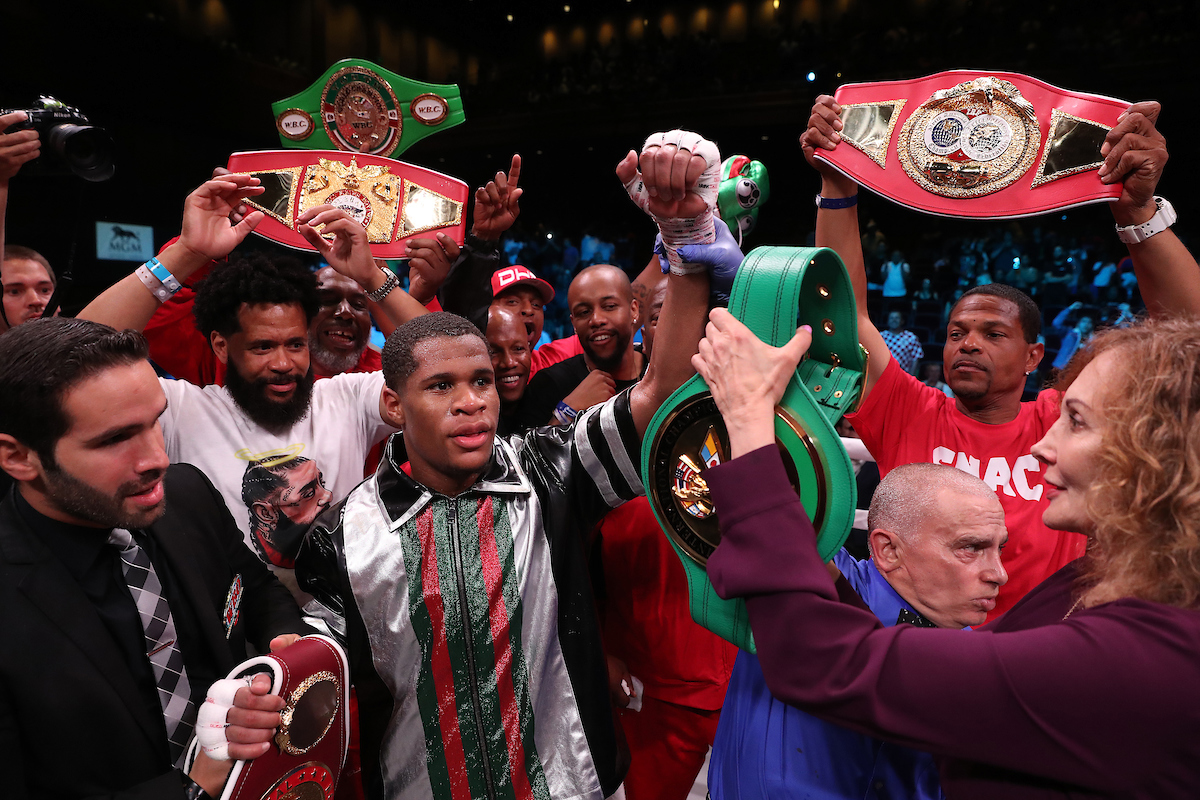 Devin Haney can take a giant leap towards World title glory when he faces fellow unbeaten star Zaur Abdullaev in a final eliminator for the WBC World Lightweight title on Friday September 13 at the Hulu Theater in Madison Square Garden, New York, live on DAZN in the US and on Sky Sports in the UK.

Haney (22-0 14 KOs) made an electrifying debut with Matchroom Boxing USA and DAZN in May, destroying Antonio Moran with a KO of the year contender in the seventh round of their clash in Maryland. The 20 year old fights in the Big Apple for the first time in his career and the Las Vegas native, ranked #2 with the WBC, hits Manhattan for his biggest fight yet in association with DHP Promotions and Titov Boxing.

Abdullaev (11-0 7 KOs) is ranked #3 with the WBC having landed the Silver Lightweight strap in just his ninth pro outing in April 2018, and the highly rated and dangerous Russian registered his 11th pro win and seventh inside the distance in February, stopping Humberto Martinez in Ekaterinburg, and now fights outside his homeland for the first time in his career.

The WBC crown will be in the hands of either Vasiliy Lomachenko or Luke Campbell MBE when the clash at The O2 in London on August 31, with Haney and Abdullaev keenly observing that clash from their training camps become locking horns on September 13.

“It always feels good when I get the official date,” said Haney. “I stay in the gym because I’m a dog and I love to fight. I want the world to see me rise to my competition. The better they are the better I am. I’m fighting an undefeated fighter at Hulu Theater at Madison Square Garden.

“New York fans are some of the most loyal fans in sports and I’m looking forward to really putting on a show for them. Abdullaev likes to apply pressure and I expect nothing less on September 13. I’ve seen him fight and he’s a hungry fighter, there’s no doubt he is my toughest opponent to date. This fight is one step away from a World title fight so we both have a lot on the line.

“Abdullaev doesn’t have a big name, but he’s ranked #3 for a reason, and I’m not ducking him or anyone else that stands in my way. I’m blessed to have tremendous support from DAZN and Eddie Hearn. With this partnership I have an opportunity to fight the best in the world. I encourage everyone in NYC to buy their tickets or get the DAZN App and watch my growth into the next superstar in boxing. This fight is going to be lit!”

“I’m delighted that the fight is happening,” said Abdullaev. “I was panicking when I saw some posts from Haney on social media that nobody wants to fight him at 135lbs, and he might have to move up in weight. I kept biting my nails and really wanted to get engaged but been told to stay patient. Allah the gracious has delivered this fight and now its reality.

“I am a bit disappointed that the fight won’t be at Haney’s Las Vegas back yard as it would have been great to dethrone him in front of his home crowed, but New York is a great boxing city. I’m not silly and I do understand that I’m coming as an underdog but on September 13, I’m coming to crash the hype against all odds.”

WBA and IBF World Super-Bantamweight champion Daniel Roman leads a stacked undercard in a mouth-watering chief-support bout as he takes on lethal WBA mandatory challenger Murodjon Akhmadaliev. Roman (27-2-1 10 KOs) unified his WBA crown with the IBF strap of Irishman TJ Doheny in a fight of the year contender at home in Los Angeles in April, a fifth World title win on the bounce a fourth inside 14 months for the 29 year old.

Roman’s fifth defense of his WBA crown pits him against dangerous Uzbek talent Akhmadaliev (6-0 5 KOs) – the highly decorated amateur has looked fearsome in ending five of his six pro outings to date inside the distance, with the 25 year old’s last win coming on the same LA bill as Roman’s dust-up with Doheny. Roman vs. Akhmadaliev is brought to you in association with Thompson Boxing and World of Boxing.

“Anyone that knows me understands that I’m a real fighter,” said Roman. “I’ll fight anyone they put in front of me. Akhmadaliev is hungry, but so am I. It wasn’t that long ago [2017] when I challenged for the WBA title so we’re not going to give it up. I’m here to fight and defend the WBA belt once more. I have two belts [WBA and IBF], but I want more. My goal is to get all of them so by no means am I overlooking Akhmadaliev. He has that amateur pedigree, can punch with power and likes to come forward. The second you underestimate someone, that’s when bad things happen. I’ll be ready for whatever he brings.

“As a unified champion, I understand that I have a target on my back. That’s why I’ve been in the gym, staying sharp like I always do. There’s no time to relax and look back at what I’ve done because my work isn’t finished.”

“Danny is among the most committed and disciplined World champions out there,” said Ken Thompson, president of Thompson Boxing Promotions. “He relishes challenges and at this point in his career, he only wants the toughest and biggest fights. Akhmadaliev is a young and dangerous opponent, but Danny has all the tools to continue his reign as the best talent in the division. We’re confident that he’ll deliver another excellent performance and retain his WBA title for the fifth time.”

“I am very glad that Daniel Roman took this fight,” said Akhmadaliev. “I know that we are both warriors and this will be a real war! Don’t miss this fight!”

“We have been waiting for this fight for some time,” said Vadim Kornilov from World of Boxing. “I believe with the will, character, and power of both of these guys, this fight will be a fight of the year candidate.”

Serrano (36-1-1 27 KOs) conquered her seventh weight class at the Hulu Theater in title in January when the Puerto Rican destroyed Eva Voraberger inside the opening round to claim the vacant WBO Super-Flyweight title.

Serrano held the WBO Featherweight strap in 2016 before vacating it then her sister Cindy picked it up later that year. Hardy (22-0 4 KOs) was next in line to win the vacant title in October in a rematch against Shelley Vincent in the Hulu Theater. Hardy put boxing on hold to return to MMA in June with an outing at Bellator 222 at Madison Square Garden but returns to boxing to go head-to-head with her fellow Brooklynite.

“We found out in February that as a super-champion Amanda could call out any champion in any weight division and she would be the next defense — and she chose me. I didn’t get this far in the boxing game to not know how it works, they’re hyping up a big fight between her and Katie Taylor and this is the second of Amanda’s three-fight deal.

“It will be my first time competing as an underdog even as the current world champion but I’m excited as hell. Everyone knows I have the balls for it. I grew up with a tough mamma, trust me – nobody scares me.”

“I’m very excited to be back in the ring and excited to be fighting Heather Hardy,” said Serrano. “Heather is 22-0 for a reason, she always finds a way to win. We’ve sparred in the past and I’ve never had an easy day with her.

“So many of the other champions vacated their belts to avoid fighting me but Heather is a true world champion who will not give up her belt.

“We know each other well and I’m honored to fight her for her World title. It’s nothing personal, just business for two girls from Brooklyn in the ring.”

“On Friday, September 13, seven-division world champion Amanda ‘The Real Deal’ Serrano will attempt to wrest the WBO Featherweight title from undefeated champion Heather ‘The Heat’ Hardy in what promises to be an explosive matchup,” said Lou DiBella, President of DiBella Entertainment. “Neither Hardy nor Serrano have ever been in a bad fight, both Brooklynites have passionate fan bases and are tremendous ambassadors for women’s boxing. This is a must-win fight for both boxers and will steal the show.”

The Heavyweight landscape remains a hot one and there’s a great 50-50 clash on the card as Michael Hunter challenges Sergey Kuzmin for the WBA Intercontinental title. Hunter (17-1 12 KOs) holds the International strap with the WBA having KO’d Alexander Ustinov in Monte Carlo in November and defended that with a second round KO of Fabio Maldonado in Maryland in May. The 31 year old is rapidly rising in the rankings and can take a huge leap towards World title action with a win but faces a crunch challenge in the form of Kuzmin (15-0 11 KOs).

The unbeaten Russian puts the strap he won at Wembley Stadium in London in September against David Price and first saw off LaRon Mitchell and then Joey Dawejko in successful Stateside defenses. With Kuzmin ranked #5 and Hunter #8 with the WBA, the victor in New York will be knocking on the door for a title shot, raising the stakes in this pick’em match-up, in association with World of Boxing.

“I’m excited to be fighting Sergey,” said Hunter. “I know that this is not going to be an easy fight, but I am definitely up for the challenge and I want to show people that I am the best in the division.”

“I have worked very hard for this opportunity,” said Kuzmin. “I am here to win this fight and go after the World title. It doesn’t matter to me whether this fight is in the USA or in Russia, I am very confident in my victory. I know my opponent very well, he’s a good boxer, but only one of us is going to be victorious.”

“This is a fight between two top ten prospects, both hold regional titles,” said Vadim Kornilov of World of Boxing. “This fight will hopefully be an eliminator for the World championship mandatory.”

“This is a brilliant show and a big chance for Devin to take NYC by storm,” said promoter Eddie Hearn. “Abdullaev is a dangerous undefeated fighter but Devin is ready for all comers and wants to win this fight and then go straight into the Lomachenko vs. Campbell winner. It’s crazy to believe he is just 20 years of age – I think it’s fair to say he is the most exciting young fighter in the world right now.

“Roman vs. Akhmadaliev is an absolute war, Danny refused to vacate the belt and like a true champion will face a young fearless, hard hitting mandatory challenger who is taking a giant leap after just six fights.

“The Heavyweight division is red hot and Hunter v Kuzmin maybe one of the match ups of the year – do not blink on this one! We probably could have filled this venue with Serrano vs. Hardy alone, it’s an amazing fight for NYC with the winner set for a defining Katie Taylor fight next. Do not miss this show!”

“We are excited to kick off our busy fall line-up with the return of blue-chip prospect Devin Haney on DAZN,” said Joseph Markowski, DAZN EVP, North America. “Matchroom has put together a stacked card for New York fight fans and those watching around the world on DAZN. We are preparing to close out our first year in boxing with a bang and it all starts September 13 at the Hulu Theater at Madison Square Garden.”

An announcement on ticket prices and on-sale dates will be made later this week.