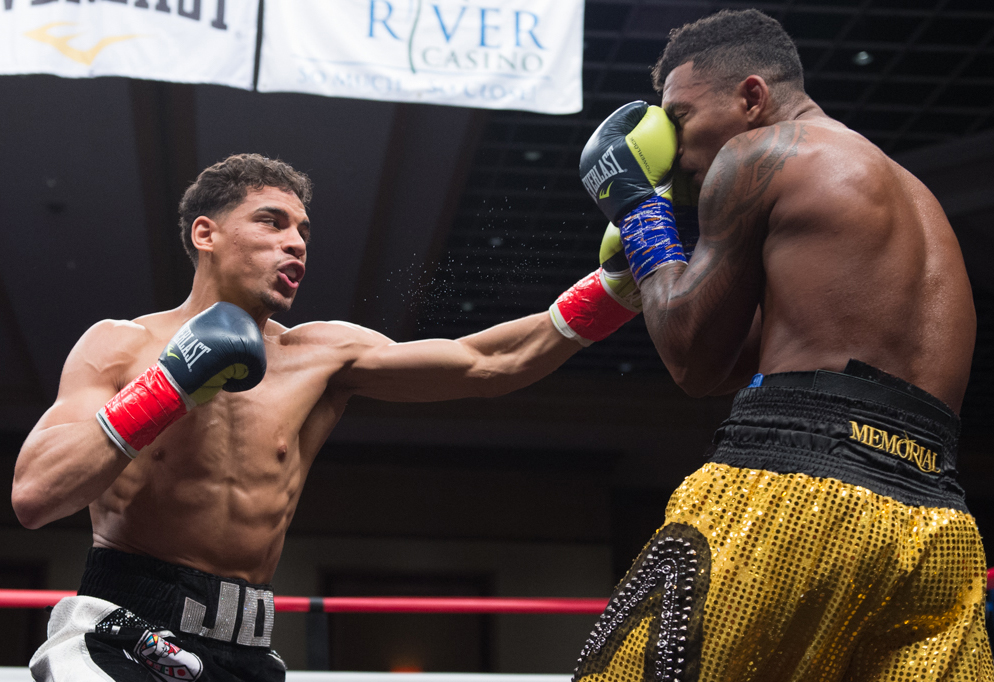 REIGNING WBC YOUTH World Lightweight Champion Jamaine Ortiz, left, returns Friday night at Twin River Casino Hotel in Lincoln, RI, in the eight-round co-main event against Romain Couture, who boasts an 8-1-1 record and makes his U.S. debut. Ortiz continues to chop down opponents in impressive fashion, including his February win over Ricardo Quiroz to capture the WBC belt followed by a first-round knockout win over Vitor Jones in April. Ortiz is now 11-0 and quickly climbing the ladder in the 135-pound division.

Lincoln, RI (Aug. 6, 2019) — There’s a time in every boxer’s career when he or she hopes to take the leap from prospect to contender.

While there’s no set timetable for when a fighter is supposed to climb the next rung on the ladder, most will know when their time has come. With that designation comes additional responsibilities and expectations. Fights are more competitive, training camps are usually longer and more exhausting and, for the select few lucky enough to get this far, the paydays are much brighter.

At 11-0, Worcester, MA, lightweight Jamaine Ortiz is still considered a prospect by most, but the reigning WBC Youth World Champion doesn’t plan on staying in that lane for too long. If Ortiz has his way, he’ll be in the conversation among the sport’s top 135-pounders within the next year and a half, if he isn’t already.

“My job is to be ready for that opportunity,” said Ortiz, who returns Friday night at Twin River Casino Hotel in the co-main event of CES Boxing’s summer-ending showcase at the Event Center.

“I have big goals. I want to go up that ladder. I’m not just content with that WBC belt. My main mission is to win multiple world titles.”

Since capturing the WBC Youth crown in February with a convincing win over previously-unbeaten Oxnard, CA, native Ricardo Quiroz, Ortiz may have officially made the leap from prospect to contender. The belt he wears now was worn by some of the sport’s best, from Canelo Alvarez to Chad Dawson, and being part of the hierarchy of WBC champions usually results in instant gratification in the form of higher rankings and notoriety.

Eight weeks after beating Quiroz, Ortiz returned to Twin River and made quick work of Brazilian Vitor Jones, stopping the veteran by first-round knockout. Now he faces another relatively unknown international standout in Romain Couture (8-1-1, 4 KO), a budding prospect from France who fights on U.S. soil for the first time.

Tickets start at $47 and are available online at www.cesboxing.com or www.showclix.com. Doors open at 6 p.m. ET and the first fight begins at 7.

For Ortiz, these last few months have provided unrivaled peace of mind, specifically now that he has overcome the hand injuries that kept him out of action for most of 2018. Rest and recovery allowed him to avoid surgery, and he returned with a bang in February to beat Quiroz following a nine-month layoff, eschewing the tune-up fight most boxers demand after such a long time away from the ring.

Ortiz is a rare breed, a fighter who knows he can’t be the best unless he beats the best. That mentality carried him through his amateur career when he won more than 100 fights and earned a trip to the semifinals of the U.S. Olympic Trials in Nevada. As a pro, he continues to move forward, stepping up the level of competition each time, provided most lightweights in his path don’t try to avoid him.

“Right now, I feel like I don’t have the spotlight I want yet, so whoever is in front of me, I’m going to knock down until I get there,” Ortiz said. “I know a lot of people want the belt, so I have to stay focused.”

The 23-year-old Ortiz is aware of his surroundings and knows who currently owns that spotlight in the 135- and even the 140-pound divisions, prime contenders such as Ryan Garcia or Devin Haney, both of whom Ortiz envisions himself fighting in the near future. He’s also wary of the upsets this year that have turned the sport on its ear, so he’s cautious of getting too far ahead of himself or overlooking any of his opponents regardless of their experience.

“Anything can happen. This is boxing,” Ortiz said. “I don’t let up on anyone. Regardless of what happened in February and with me winning the title, my work ethic hasn’t changed one bit. I still train hard. Now I’m just more focused.”

As an apprentice carpenter and member of the Local 107 carpenter’s union, Ortiz has flexibility with his job that allows him to take time off when necessary in preparation for a fight, a luxury most fighters don’t have. He’s reached the point in his career where he understand he needs to put everything he has into boxing in order to reach the lofty goals he’s set for himself.

Some may still consider him a prospect, but as he continues to mow down one opponent after another, it’s hard to look at the hard-hitting, elusive Ortiz as a serious contender in the 135-pound division.

“When my time comes, I’m going to put on a show,” Ortiz said. “I just finished one of the best camps I’ve ever had. I’m pain-free for the first time in a while. If I want to be the best, I have to prove it. Whatever competition is in front of me, I’m ready for it.”

Next Friday’s main event features reigning NBA Heavyweight World Champion Juiseppe Cusumano (18-2, 16 KOs) of Sicily in the quest to add another belt to his collection when he battles “The Gentle Giant” Steve Vukosa (11-1, 4 KOs) of nearby Quincy, MA, in an eight-round bout for the vacant WBC USNBC crown.

Another red-hot fighter, Marqus Bates (7-2, 5 KOs) of Taunton, MA, aims for his sixth consecutive win in an intriguing six-round welterweight bout against well-traveled Lancaster, PA, vet Evincii Dixon (8-23-2, 3 KOs), who fights for the 34th time in six years and returns to Rhode Island for the first time since 2013.