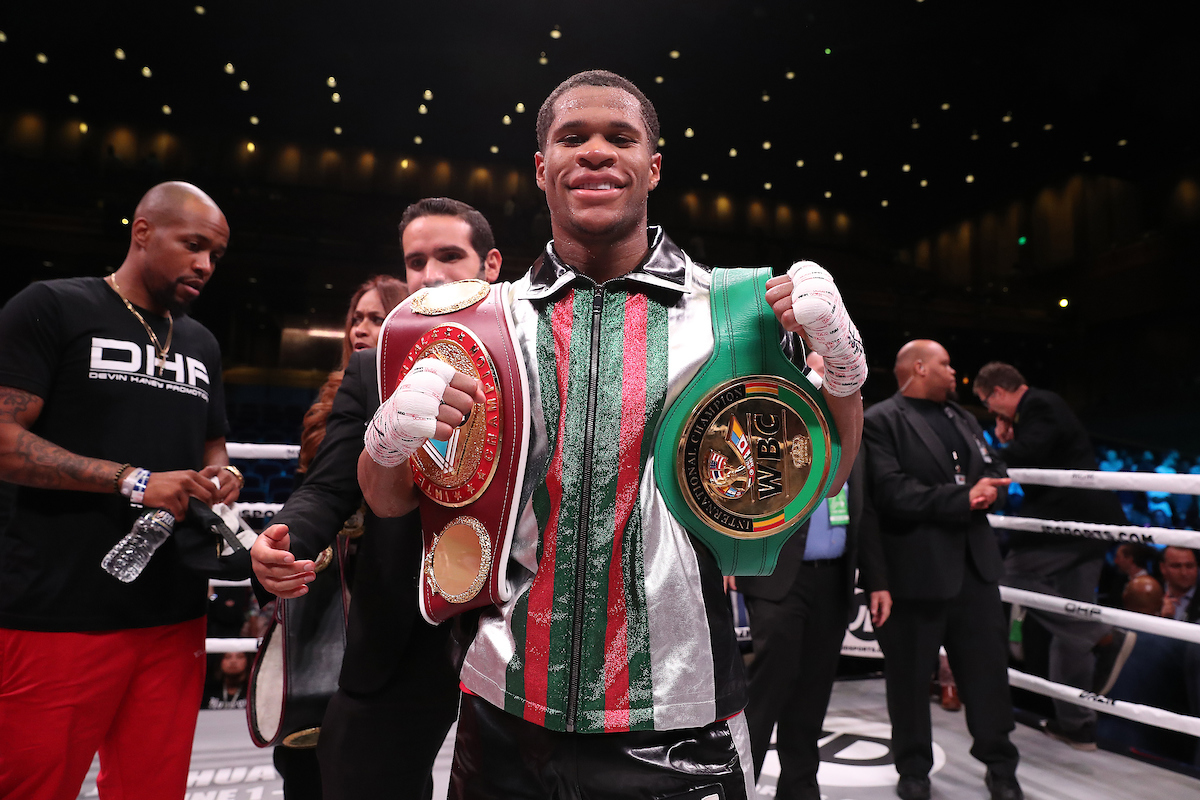 TICKETS ON SALE NOW FOR HANEY VS. ABDULLAEV

Tickets for the WBC World Lightweight title final eliminator clash between American sensation Devin Haney and Russian dangerman Zaur Abdellaev on Friday September 13 at the Hulu Theater at Madison Square Garden in New York, live on DAZN in the US and on Sky Sports in the UK.

Haney (22-0 14 KOs) made an electrifying debut with Matchroom Boxing USA and DAZN in May, destroying Antonio Moran with a KO of the year contender in the seventh round of their clash in Maryland. The 20 year old fights in the Big Apple for the first time in his career and the Las Vegas native, ranked #2 with the WBC, hits Manhattan for his biggest fight yet in association with Devin Haney Promotions and Titov Boxing.

Abdullaev (11-0 7 KOs) is ranked #3 with the WBC having landed the Silver Lightweight strap in just his ninth pro outing in April 2018, and the highly rated and dangerous Russian registered his 11th pro win and seventh inside the distance in February, stopping Humberto Martinez in Ekaterinburg, and now fights outside his homeland for the first time in his career.

The WBC crown will be in the hands of either Vasiliy Lomachenko or Luke Campbell MBE when the clash at The O2 in London on August 31, with Haney and Abdullaev keenly observing that clash from their training camps become locking horns on September 13.

WBA and IBF World Super-Bantamweight champion Daniel Roman leads a stacked undercard in a mouth-watering chief-support bout as he takes on lethal WBA mandatory challenger Murodjon Akhmadaliev. Roman (27-2-1 10 KOs) unified his WBA crown with the IBF strap of Irishman TJ Doheny in a fight of the year contender at home in Los Angeles in April, a fifth World title win on the bounce a fourth inside 14 months for the 29 year old.

Roman’s fifth defense of his WBA crown pits him against dangerous Uzbek talent Akhmadaliev (6-0 5 KOs) – the highly decorated amateur has looked fearsome in ending five of his six pro outings to date inside the distance, with the 25 year old’s last win coming on the same LA bill as Roman’s dust-up with Doheny. Roman vs. Akhmadaliev is brought to you in association with Thompson Boxing and World of Boxing.

Serrano (36-1-1 27 KOs) conquered her seventh weight class at the Hulu Theater in title in January when the Puerto Rican destroyed Eva Voraberger inside the opening round to claim the vacant WBO Super-Flyweight title.

Serrano held the WBO Featherweight strap in 2016 before vacating it then her sister Cindy picked it up later that year. Hardy (22-0 4 KOs) was next in line to win the vacant title in October in a rematch against Shelley Vincent in the Hulu Theater. Hardy put boxing on hold to return to MMA in June with an outing at Bellator 222 at Madison Square Garden but returns to boxing to go head-to-head with her fellow Brooklynite.

The Heavyweight landscape remains a hot one and there’s a great 50-50 clash on the card as Michael Hunter challenges Sergey Kuzmin for the WBA Intercontinental title. Hunter (17-1 12 KOs) holds the International strap with the WBA having KO’d Alexander Ustinov in Monte Carlo in November and defended that with a second round KO of Fabio Maldonado in Maryland in May. The 31 year old is rapidly rising in the rankings and can take a huge leap towards World title action with a win but faces a crunch challenge in the form of Kuzmin (15-0 11 KOs).

The unbeaten Russian puts the strap he won at Wembley Stadium in London in September against David Price and first saw off LaRon Mitchell and then Joey Dawejko in successful Stateside defenses. With Kuzmin ranked #5 and Hunter #8 with the WBA, the victor in New York will be knocking on the door for a title shot, raising the stakes in this pick’em match-up, in association with World of Boxing.