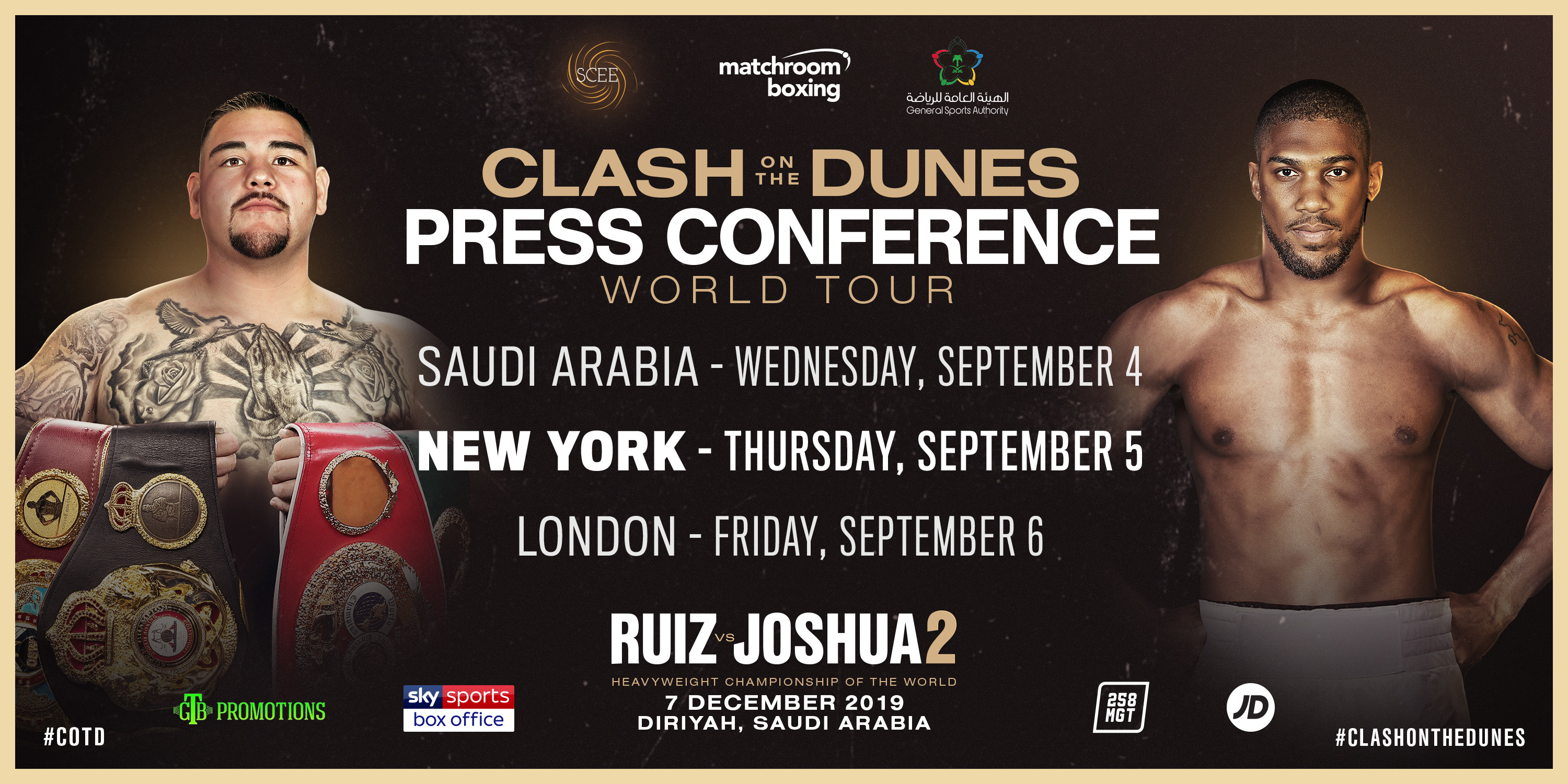 Andy Ruiz Jr and Anthony Joshua OBE will rematch in a colossal ‘Clash on the Dunes’ in the historical town of Diriyah, Kingdom of Saudi Arabia on Saturday December 7, shown live on Sky Sports Box Office in the UK.

Ahead of one of the most anticipated rematches in sport, both fighters will first meet face-to-face in Diriyah on September 4, 2019 – the first time the pair have met since their memorable showdown at a sold-out Madison Square Garden in New York on June 1.

The extraordinary and unique setting of Diriyah, a stunning UNESCO heritage site located on the outskirts of Saudi Arabia’s capital, Riyadh, will play host to the first ever Heavyweight World Title fight in the Middle East on December 7, 2019 – part of Diriyah Season, 2019.

All media wishing to attend Thursday’s lunchtime press conference in New York must complete THIS FORM by 3.00pm on Monday September 2.

LONDON – FRIDAY, SEPTEMBER 6
All media wishing to attend Friday’s lunchtime press conference in London must complete THIS FORM by 3.00pm on Monday September 2.

Ruiz Jr (33-1, 22 KOs) stunned Joshua to capture his IBF, WBA, WBO and IBO World Titles in one of the biggest Heavyweight upsets of all time at a sold-out Madison Square Garden in New York on June 1. In doing so, ‘The Destroyer’ created history by becoming the first boxer of Mexican heritage to be crowned World Heavyweight Champion.

The California-based Mexican headed into his second World Title shot as a huge underdog but proceeded to shock the world by flooring Joshua four times on route to a monumental seventh round stoppage win that halted ‘AJ’s’ quest to become the undisputed Heavyweight king dead in its tracks.

Joshua (22-1, 20 KOs) attempts to regain his World Titles and become a two-time Heavyweight ruler after tasting defeat for the first time in his professional career on his US debut in The Big Apple. The British sensation had won all 22 of his previous bouts before surrendering his titles to Ruiz Jr in what he described as a “minor setback”.

Uninterested in a comeback fight, the 2012 Olympic gold medalist jumped into an immediate rematch with Ruiz Jr on neutral ground to reclaim his position as the number one Heavyweight on the planet and continue on his journey to becoming the undisputed king.