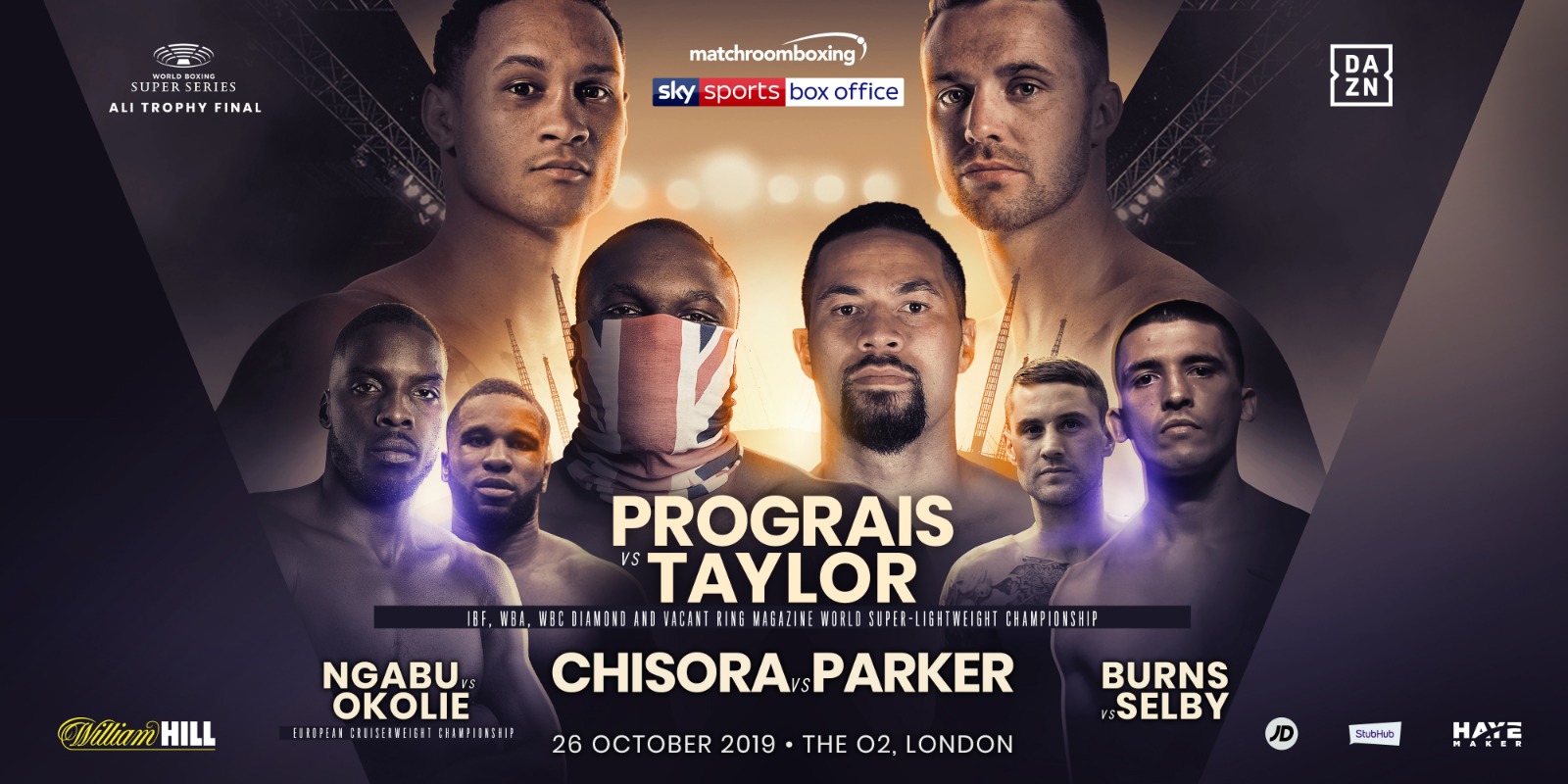 PROGRAIS AND TAYLOR CLASH FOR THE ALI TROPHY AT THE O2
Chisora-Parker, Burns-Selby & Ngabu-Okolie land on October 26 blockbuster

WBA World Champion & WBC Diamond Champion Regis ‘Rougarou’ Prograis will be travelling to the UK after having fought the quarter and semi-final in his home state of Louisiana. IBF World Champion & WBC Silver Champion Josh ‘The Tartan Tornado’ Taylor boxed both of his preliminary bouts in Glasgow, and is now moving to neutral ground.

Prograis and Taylor entered the WBSS and the quest for the Ali Trophy as the two highest-seeded boxers in a loaded Super-Lightweight bracket. No.1 seed Prograis earned his spot in the final by outdoing Terry Flanagan on points last October, and then went on to stop Kiryl Relikh in six rounds and take the WBA World title in the semi in late April. Meanwhile, No.2 seed Taylor stopped Ryan Martin in round 7 last November, and then proceeded to decision Ivan Baranchyk to claim the IBF World title in May.

“I’m very excited to get everything settled for this fight,” said Prograis. “This is the fight I wanted the most and it’s the fight to prove who is the best in the division. My goal has always been the same and that’s to prove I’m the best 140lbs fighter in the world and to become undisputed.

“It has always been a dream for me to fight in London. The boxing fans in the UK are some of the best in the world and I can’t wait to go and put on a show. I know once they see me fight they’ll be fans for life.

“Taylor is in my opinion is the 2nd 140lbs in the world after myself. He had two great performances leading into the finals and I’m looking forward to fighting the best Josh Taylor on October 26th.”

“I’m massively excited,” said Taylor. “I want to prove that I’m the best in the division by taking on the best fighters. Now it’s finally over the line I can concentrate on getting to work in the gym and going full steam ahead again.

“I’m very confident that I can outbox him and outfight him as well, I can’t see anything other than a Josh Taylor win on October 26. It will be a huge buzz to fight for the Muhammad Ali trophy in front of a huge crowd at The O2. I believe that I am the best fighter in the division and now it’s time to prove it.”

Derek Chisora will be targeting another explosive victory in his showdown with New Zealand’s Parker, a former WBO Heavyweight World Champion, as two exciting contenders collide in the Capital. ‘WAR’ Chisora is back at the scene of last month’s dramatic knockout triumph over Poland’s Artur Szpilka while Parker returns to Britain after back-to-back stoppages of Alexander Flores and Alex Leapai.

“I’ve wanted this fight over a year now, Parker the Ozzie kangaroo fled for the bush once already this year, complaining he didn’t have enough time to prepare,” said Chisora. “I’ve now given him all the time he needed. I’m a real fighter, I’m always ready to go to WAR. Szpilka felt what Derek WAR Chisora is all about, and he was my friend, and trust me that was just 30% of what I’ve got ready for that Aussie bum.

“I’m gonna to do what Anthony Joshua and Andy Ruiz both couldn’t do, I’m gonna knock Parker’s dingo a** clean out, and send this Aussie chump back to the other side of the planet, where he belongs.”

“Chisora will come with experience and he will come with pressure,” said Parker. “He’s coming off two good wins, so he’ll be full on confidence and out to make a statement. As always, I back myself against any fighter on this planet and I’m expecting an exciting war on October 26.

“I’ve always had a lot of love and support from my UK fans and I can’t wait for my return. A win here takes me another step towards targeting the other top names in the division and becoming a two-weight World Champion.”

“What an absolute banger!” said Eddie Hearn. “This card is epic, and we’ve only announced 4 fights. Prograis vs. Taylor is such a wonderful unification match up and Chisora vs. Parker is nothing but Heavyweight fireworks. Three weight World champion Ricky Burns tackles former World Champion Lee Selby in a brilliant domestic Lightweight battle and Lawrence Okolie faces a big step up against European Champ Yves Ngabu. There’s plenty more to be added on this massive night of boxing at The O2.”

“This is a true super fight and another huge Ali Trophy moment,” said Kalle Sauerland. “Two unbeaten, in-prime World Champions meet to settle who is best in the division, two boxers who have performed at the very highest level in this tournament.

“In this terrific match-up of two undefeated gladiators it is very difficult to predict who will be raising the Ali Trophy in the end. One thing is sure, it is going to be an enthralling showdown not to be missed!”

“Josh Taylor has become Scotland’s latest boxing hero, showing his class to win the IBF belt in the semi-final, and victory over the excellent Regis Prograis will take his career to new heights.

“Derek Chisora reminded us of his destructive power with that crushing knockout of Artur Szpilka last month, and we’ll welcome back Joseph Parker to these shores for another exciting shootout. With that crucial domestic clash between Ricky Burns and Lee Selby, and Lawrence Okolie taking a step-up to European level, it should be an enthralling evening of action at The O2.”

David Haye, manager of Derek Chisora, said: “Derek Chisora reminded us of his destructive power with that crushing knockout of Artur Szpilka last month, and we’ll welcome Joseph Parker back to these shores for another exciting shootout. With more big names to be added, it should be an enthralling evening of action at The O2.

“It’s great to be once again working with Eddie and the team at Matchroom in a co-promotion to bring fight fans a show they’ve been calling out for. Eddie and I have been trying to make this fight for sometime now, it’s been almost a year in the making, so we’re excited to finally get it over the line!

“The O2 is Derek’s favourite venue, one which has hosted career defining moments for him. He is a fighter, a performer and he loves to rise to the occasion, especially when in front of his home crowd. Just last month in the very same venue he took on a fight where many felt he had bitten off more than he could chew, but he rose to the occasion and put Szpilka to the canvas in emphatic fashion. “