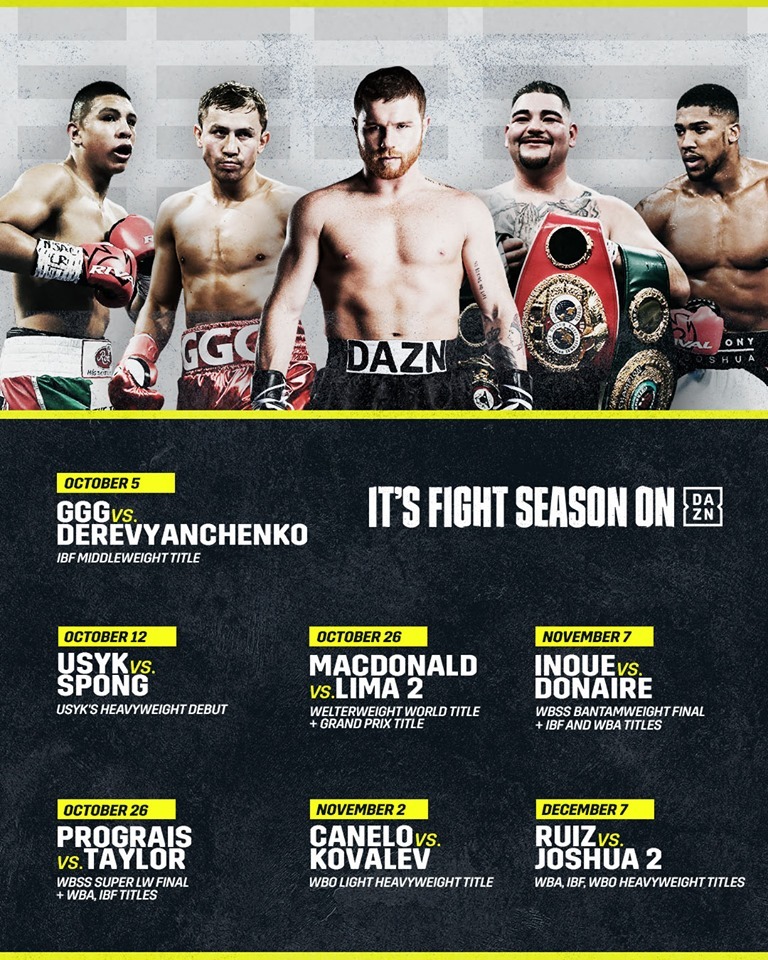 Each week Real Combat Media Publicity sends you the upcoming fights on the DAZN App which features Matchroom Boxing, Golden Boy Promotions, Bellator MMA and many other of the best international combat sports promotions. With the DAZN App, you can purchase a monthly subscription of $19.99 or a yearly subscription of DAZN for just $99.99 dollars per year to watch the best in boxing and MMA events each week. The annual plan works out at just $8.33/month. If you have already purchased DAZN , you can use this as a weekly guide to organize your viewing schedule. DAZN offers over 100 fight events each year with many other sports that include Premier League, Bundesliga, La Liga, National Basketball Association, National Football League, Major League Baseball, National Hockey League and Formula One. 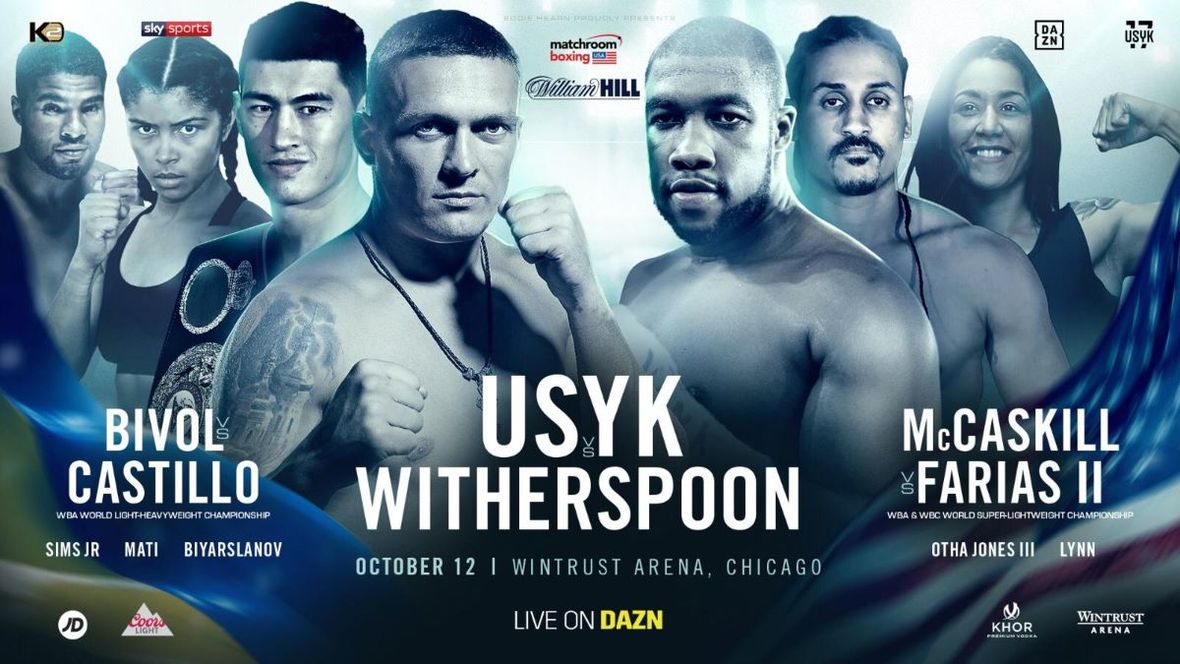 Oleksandr Usyk will face Chazz Witherspoon on his Heavyweight debut at the Wintrust Arena in Chicago on Saturday night, live on DAZN in the US and on Sky Sports in the UK.

Witherspoon (38-3 29 KOs) second cousin of former two-time World Heavyweight ruler Tim Witherspoon, is unbeaten in five years with his last win coming in March in Atlantic City over Santiago Silgado and now the 38-year-old Philadelphian gets a huge opportunity to pull off a massive upset as Ukrainian pound-for-pound king Usyk moves up to Heavyweight after leaving the Cruiserweight division as the undisputed ruler.

“I can’t wait to face Usyk in Chicago,” said Witherspoon. “I have been in training ready for a big fight, and it doesn’t get bigger than this. Oleksandr is stepping up to Heavyweight – and he’s going to find out that it’s a totally different game.

“I’ve won my last eight fights and I really feel that I’ve been waiting in the wings for a huge opportunity like this and I am going to put every ounce of myself into the fight on this massive stage.”

Witherspoon replaces Tyrone Spong in the main event on the stacked card in the Windy City after there were adverse findings in two of Spong’s urine samples. As a result, the Illinois State Athletic Commission will not license Tyrone to box and rescinded their approval of the bout with Usyk.

Tickets are on sale now for Usyk vs. Witherspoon starting at just $40 plus. Get this card by joining DAZN on the link below.

JOIN DAZN to enjoy this fight and hundreds of other fight events.

GET THIS FIGHT ON DAZN

Bellator 230: Carvalho vs. Nemkov airs on Paramount Network and DAZN at 9 p.m. ET, while Bellator Milan: Manhoef vs. Bahati airs live at 5 p.m. ET on the Bellator Mobile App

Plus, Bellator Kickboxing 12: Varga vs. Faustino to stream live and free globally on the Bellator Mobile App at 11 a.m. ET

LOS ANGELES – Bellator MMA heads to Milan this Saturday, October 12 at Allianz Cloud (Ex PalaLido) for the first time. The fight card will showcase a host international talent and also features a world title bout in the Bellator Kickboxing 12 headliner.

Bellator Milan: Manhoef vs. Bahati will air LIVE at 5 p.m. ET on the Bellator Mobile App. The fifth Bellator European Series event will be headlined by Dutch combat sports legend Melvin Manhoef (31-14-1, 2 NC) and Birmingham’s Yannick Bahati (9-4, 1 NC), who meet each other in a light heavyweight bout brimming with knockout power. Elsewhere on the card, the UK’s Ashley Reece (8-1) steps in at short notice to face Stefano Paterno (12-3-1) in a welterweight co-main event and Manchester’s Kane Mousah (12-2) makes his second Bellator appearance against late replacement Rafael Macedo (9-4, 1 NC) at lightweight. Also, Italian MMA star Alessio Sakara (20-13, 2 NC) makes his return to the Bellator cage against Canaan Grigsby (8-7) in an exciting homecoming bout.

Bellator 230: Carvalho vs. Nemkov will air on Paramount Network, and simulcast on DAZN, at 9 p.m. ET. The four-fight card is topped by former middleweight champ Rafael Carvalho (16-3) who takes on Russia’s Vadim Nemkov (10-2) in what promises to be another explosive light heavyweight encounter.

The event will also feature Bellator Kickboxing 12: Varga vs. Faustino, headlined by a title fight between Bellator Kickboxing featherweight champ Gabriel Varga (17-6) and Cristian Faustino (31-11-2), and additional preliminary MMA bouts, which will be available to watch live and free globally on the Bellator Mobile App beginning at 11 a.m. ET.

The full updated bout cards for the Bellator tripleheader are listed below.

*Bout to air following the conclusion of Manhoef vs. Bahati.

ABOUT DAZN: Whether you watch live at home, on the go or on demand DAZN lets you experience sport the way you always wanted. With access to the world’s best sports, you can watch your favorite teams, leagues and players for one simple, affordable price and with no long-term fixed contract. Featuring over 8,000 live events a year, you have the ability to play, pause and rewind, with no long-term commitments.DAZN is currently available in Germany, Austria, Switzerland, Italy, USA, Canada and Japan on most connected devices including Smart TVs, smartphones, tablets, and games consoles.