A Russia-Ukraine Story 10 Years in the Making

While Russia battles Ukraine on the world stage, two boxers fight not for country, but for legacy, FRIDAY in Philadelphia 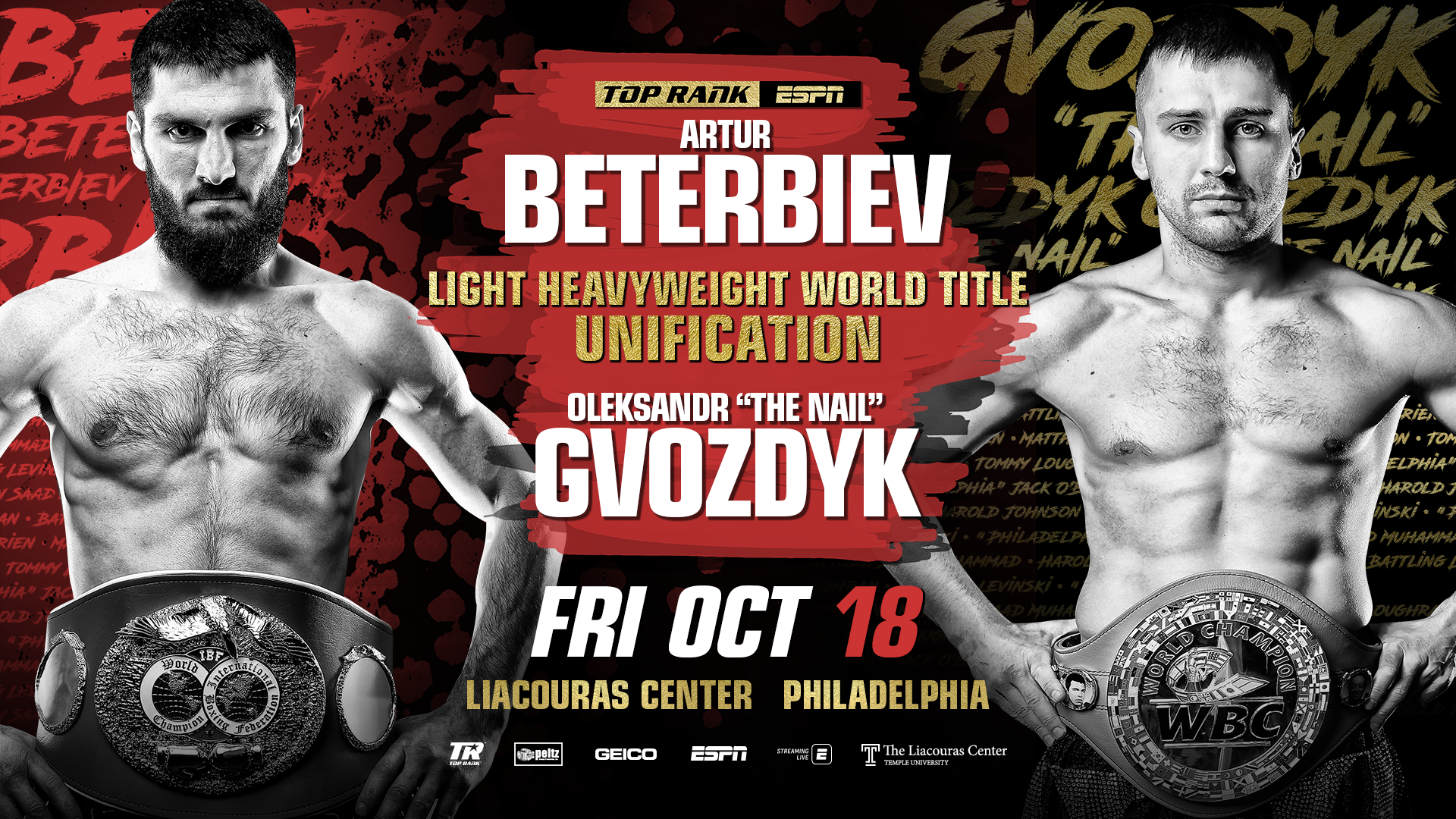 PHILADELPHIA (Oct. 15, 2019)  — As Russia and Ukraine dominate the news, both countries have become inextricably linked to the current impeachment inquiry in Washington, DC. Up the road in Philadelphia, two world champion boxers — one Russian, one Ukrainian — are preparing to meet in a light heavyweight unification bout.

As their home countries wage war against each other, their thoughts are 5,000 miles away, focused not on the opponent’s country, but on the man he will meet in the center of the ring at Temple University’s Liacouras Center on Friday. The winner will leave the ring as WBC/ IBF light heavyweight world champion.

Oleksandr Gvozdyk (17-0, 14 KOs) is the current WBC light heavyweight world champion, having defeated Adonis Stevenson via knockout in the 11th round of their December 2018 bout in Quebec, Canada.

Ukraine Arrives on the American Stage

The impeachment inquiry will examine whether Trump held up $400 million in aid to Ukraine with the intention of releasing it when the country began an investigation of Hunter Biden, and one into Ukraine’s role in the 2016 U.S. Presidential election — a conspiracy theory, which Trump and his lawyer, Rudy Giuliani, have repeatedly pushed publicly. The premise is that CrowdStrike, a California-based company that was brought in to investigate the Russian hack of the Democratic party’s servers that election year, is owned by a Ukrainian.

Zelensky, who played the President of Ukraine in a television show called Servant of the People for four years, was elected in a landslide victory in April and began his term as Ukraine’s sixth president in May. He’s an unwitting participant in American politics, which was made clear during a 10-hour, informal question-and-answer session last week with reporters in Ukraine. He spoke dismissively about the potential that Ukraine interfered with the 2016 election, saying he would have to be shown a reason to proceed with any joint “theoretical” investigation.

Like the boxers training in Philadelphia, who are focused on their fight and not on war and politics, his mind is elsewhere  — working to end the conflict with Russia on Ukraine’s Eastern border.

His constituents, the people of Ukraine, are not focused on American politics and elections.

“The Trump phone call is being covered right now in Ukraine,” said Petro Shugurov, former Ring Magazine Ukraine writer and contributing editor who lives in the country. “Mostly just that Zelensky was involved. The Ukrainian people have enough to worry about with our own politics.”

The American and the Canadian

While the conflict between Russia and Ukraine has a complicated and lengthy history, the roads that led Beterbiev and Gvozdyk to Philadelphia are well-traveled.

“The boxing federations of Russia and Ukraine are very similar,” said Shugurov. “They still operate like they did during the days of the USSR. The Russian Federation is like God Almighty to boxers in Russia. There are a lot of programs to support them, and they receive stipends.”

Both boxers were decorated amateurs. Beterbiev had more than 300 amateur fights and won gold medals at both the World Championships (2009, Milan) and European Championships (2006 and 2010). Gvozdyk had over 250 amateur bouts and won a bronze medal for Ukraine at the 2012 London Olympics.

Gvozdyk is followed closely by those in his home country of Ukraine and Ukrainians stateside, despite moving to California five years ago to focus on his career:

“One month ago, we went to the Ukrainian Festival. There were a lot of Ukrainian people there and I was surprised that a lot of them knew me,” Gvozdyk said. “We spent a couple hours there, signing autographs and taking photos.”

Gvozdyk, whose father had a brief career as an amateur boxer in Ukraine, is living out his dream in California.

“When I asked my wife to come to California with me, to leave her home, she said the most important thing is that I’m going to go with you,” Gvozdyk said of his wife, Daria.

He acknowledges that it can sometimes be difficult to be away from family as the two raise a family, but the kids — two boys and one girl, ages 3-10 — have traveled the world with their parents.

“Our kids are the most quiet kids on the plane when they travel. They don’t cry,” Gvozdyk said. “They know it’s pointless.”

Politics is not a topic that Gvozdyk is anxious to discuss, going so far as to say he doesn’t know what’s happening.  “It doesn’t bother me,” he said. “I’m just an athlete. I don’t want to make any parallels to the fight. I am living in California, he is living in Montreal. I just don’t know anything about it.”

“Teddy Atlas, Gvozdyk’s trainer, runs a tight ship,” said J Russell Peltz, who is co-promoting the championship fight with Top Rank. “It doesn’t surprise me that he’s not focused on what’s happening on the other side of the world.”

“Any war is bad for people, but I really don’t want to talk about it,” said Beterbiev, who relocated to Montreal six years ago to further his career.  “It’s far from me in Canada.”

Shugurov hints at other motives at why the boxers don’t want to talk about life in the former Soviet bloc: “They are high-profile athletes and they don’t want to upset anyone. They don’t want to have problems like those that have happened with other boxers.

“Ukrainians and Russians are everywhere and they are like a network. Fighters as a whole don’t want to get involved. They want to make money and not have problems. Beterbiev, he’s Canadian now. Gvozdyk is American.”

Beterbiev’s family life nearly mirrors that of his opponent. Married with four children ages 2-8, Beterbiev lost his father to an accident when he was only 16. His father was just starting to enjoy his son’s career.

“A couple days before he died, I won a bronze medal in a tournament,” Beterbiev said. “He said to me, ‘You won this fight. Now, go. I believe in you.’”

Raising a family away from home hasn’t been easy for Beterbiev and his wife, Medena, though Beterbiev’s mother has traveled to Canada to help.

Much Can Change in Ten Years

Ten years ago, Ukraine was led by Viktor Yushchenko, who had survived an assassination attempt by poison five years prior. There was political chaos and a gas dispute with Russia. Putin was not yet President of Russia, but it was understood that he was in charge of the country. There was tension between the two countries, but nothing that matched the war and hostility they are facing today.

“We had beat Germany together,” said Shugurov. “We fought Nazis together. A whole lot of people believed we should be one country. While Ukraine had a Western-friendly leader, there was a brotherhood between the people of the countries.”

The U.S. had a different president, one not embroiled in an impeachment inquiry permeated by Russian and Ukrainian ties.

Ten years ago, two fighters, one from Ukraine, one from Russia, met in a boxing ring with the Russian besting the Ukrainian. The two fighters, now husbands and fathers, undefeated world champion professionals, living away from home and seeking the glory that comes with unifying world titles, will meet in the most pivotal fight of their respective careers. It’s a fight that transcends politics and war, whose winner, at least in the boxing world, will be declared unified light heavyweight champion.

Promoted by Top Rank, in association with Peltz Boxing, tickets priced at $150, $90, $75 and $50 (not including applicable fees) can be purchased at the Liacouras Center Box Office, www.liacourascenter.com or charge by phone at 800-298-4200.