The Comeback: Oscar Valdez Gets Off Deck to KO Adam Lopez 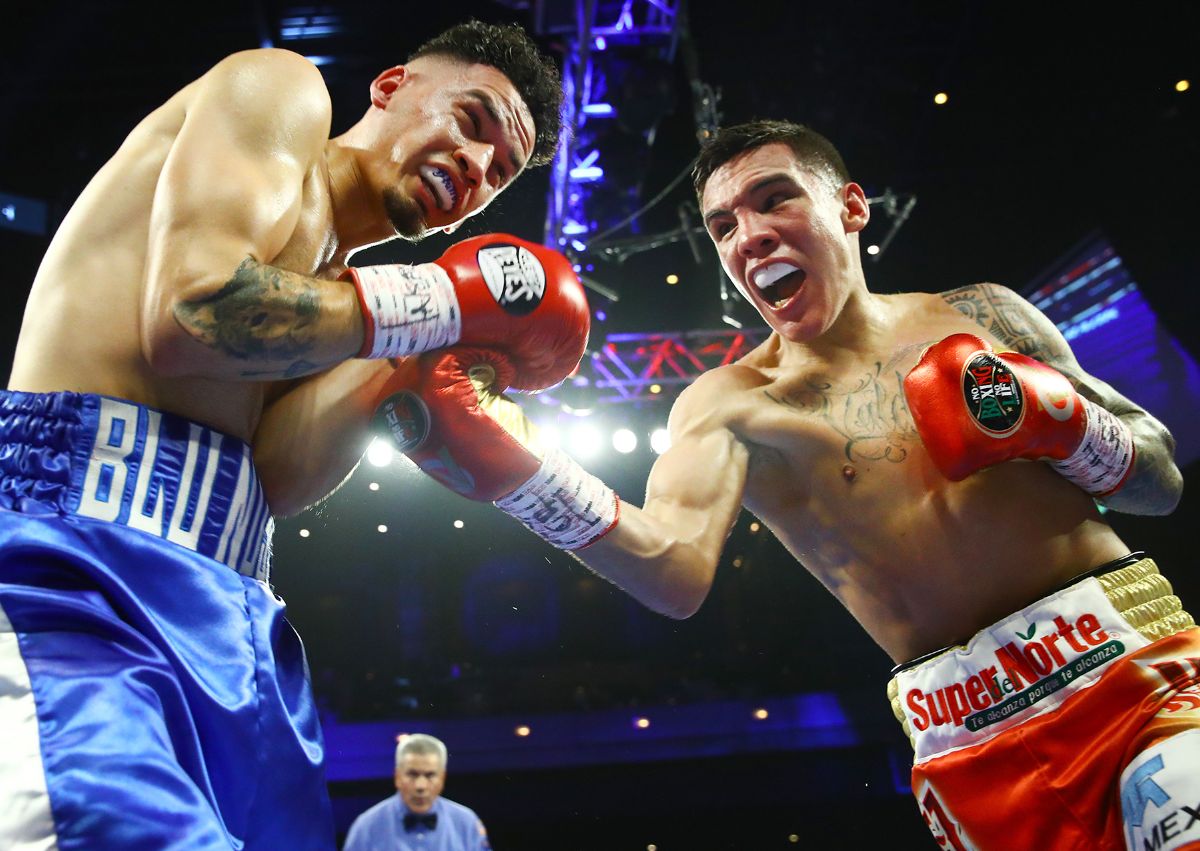 CLICK HERE for PHOTOS
(Photo Credit: Mikey Williams/ Top Rank)
LAS VEGAS (Nov. 30, 2019) — Former featherweight world champion Oscar Valdez’s super featherweight debut was a doozy. Valdez (27-0, 21 KOs) got off the deck to stop late replacement Adam Lopez in seven rounds in a barnburner of a main event in front of a packed house at The Chelsea inside The Cosmopolitan of Las Vegas.Valdez was knocked down in the second round, only to come back to knock down Lopez (13-2) with a left hook in the seventh. A follow-up barrage caused referee Russell Mora to stop the bout with seven seconds remaining in the round.

As this was a WBC world title eliminator, Valdez is now in line to face champion Miguel Berchelt, who was seated ringside.

“I was very surprised. I take my hat off to Adam Lopez. He’s a great fighter, great warrior, just like his father {the late Hector Lopez} was,” Valdez said. I just got hit. This is boxing. I prepared myself for two, three months for Gutierrez, but that’s no excuse. This kid is a warrior.

“Berchelt is a true champion inside the ring and outside the ring. Fans love him. That’s the one I want to fight. He has that WBC belt, and he’s trying to take it back home.”

The scorecards were academic, and now Frampton hopes a showdown with WBO junior lightweight world champion Jamel Herring is in his future.

“I was happy. That was the plan, to target the body,” Frampton said. “Tyler is pretty tall. We’ve seen that he’s left gaps. My hand wasn’t great coming into the camp as well. It’s always a bit softer hitting the body than the head. I feel like I hurt it again in the second round, so that’s why it wasn’t the most exciting fight in the world, but I just cruised to a points win. I just wanted to be safe with my hands.

“I re-fractured the hand twice in camp, but I knew a lot of people were coming to support me. There was absolutely no way I wasn’t fighting. I know {Jamel} is the champ. I just want to fight for a world title next. I want to be involved in big fights. I would love the opportunity to fight Jamel. I’m not the champion. He’s the champion.”

Said Herring: “Wherever, whenever, I want to fight Carl Frampton. We’re under the same promotional umbrella, so it shouldn’t be a problem.”

Patrick Teixeira overcame brutal cuts to score a unanimous decision over Carlos Adames in a fight for the vacant interim WBO junior middleweight world title. Teixeira (31-1, 22 KOs) knocked down Adames (18-1, 14 KOs) in the seventh round and won the 12th round on two of three judges’ cards to prevail by scores of 116-111 and 114-113 2x.

“I felt like I needed to win the last round. It was a close fight. Every point was crucial, and I won the final round to win the fight,” Teixeira said. “It was tough with the cuts, but I was able to get through it because of my experience. It was a little harder, but my corner did an excellent job on the cuts.”

“I felt ready to finish the fight early and came out very aggressively to do exactly that,” Zayas said. “I knew he was taller, so I wanted to pressure him to shorten the distance. I kept focused on working on the inside and managed to finish him quickly.”

— Top heavyweight prospect Guido “The Gladiator” Vianello (6-0, 6 KOs) notched another quick KO, stopping Colby Madison (8-2-2, 5 KOs) with a right hand at 44 seconds of the opening round.

— Japanese super lightweight prospect Andy Hiraoka (15-0, 10 KOs) had a successful U.S. debut, knocking out Rogelio Casarez (13-9, 5 KOs) in the second round of a scheduled eight-rounder.

About The Cosmopolitan of Las Vegas
The Cosmopolitan of Las Vegas is a unique luxury resort and casino that offers a decidedly different perspective. Located in the heart of the Las Vegas Strip, The Cosmopolitan’s distinct vertical multi-tower design features more than 3,000 guestrooms with residential living spaces, private terraces and breathtaking views of the city skyline. Luxury amenities include a premier lineup of world-class culinary experiences; an intriguing mix of bars, nightclubs and entertainment venues; 100,000-square-foot-casino; award-winning spa, salon and fitness center; unrivaled pool district and an eclectic line-up of hand-selected boutiques. For more information visit: www.cosmopolitanlasvegas.com and follow us on Instagram, Twitter and Facebook.