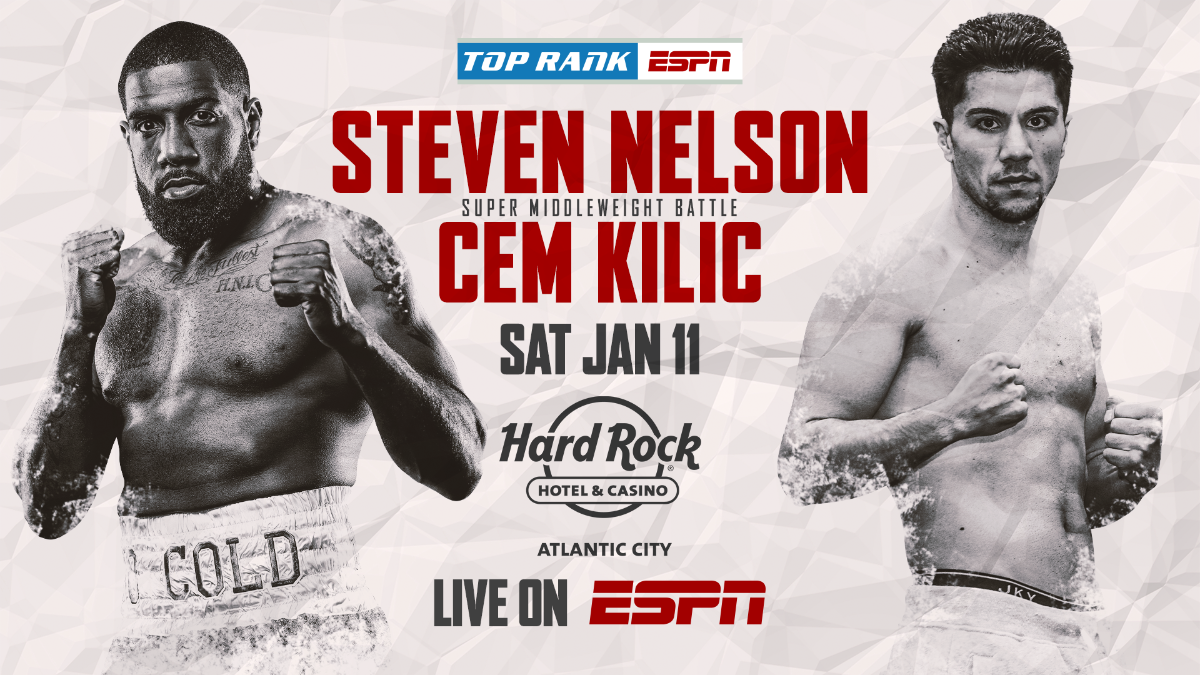 ATLANTIC CITY, N.J. (Dec. 9, 2019) — Steven “So Cold” Nelson and Cem “Champ” Kilic were set to tangle Saturday evening in a battle of unbeaten super middleweights on Terence Crawford’s undercard, but an unexpected injury changed their plans.

“This is one of those moments. When this opportunity presented itself, I knew I had to take it,” Nelson said. “I compare this to when Terence Crawford got the late call to fight Breidis Prescott on HBO. He took advantage of that opportunity, and I am going to take advantage of the ESPN spotlight.”

“While I’m disappointed not to fight on the Dec. 14 card, I am beyond excited to showcase my talent to an even bigger audience just four weeks later on ESPN,” Kilic said. “I have been working hard in Florida with Buddy McGirt so all sports fans can see the best Cem Kilic on fight night!”

Nelson (15-0, 12 KOs), from Omaha, Neb., is part of one of boxing’s great stables, the Brian “BoMac” McIntyre-trained crew that also includes Crawford and junior lightweight world champion Jamel Herring. A 2012 U.S. Olympic team alternate and a U.S. Army veteran, Nelson took up the sport in 2010. He won the first 14 bouts of his career as a light heavyweight before moving down to super middleweight. In his super middleweight debut, Sept. 1 in Omaha, Nelson blew away Derrick Findley in four rounds. Kilic (14-0, 9 KOs) is a Los Angeles-based native of Germany who has won four of his last five by stoppage, most recently stopping Martez McGregor June 15 on the Tyson Fury-Tom Schwarz undercard.

The winner of this battle of world-ranked 168-pounders will position himself for a shot at one of the world titles. Nelson and Kilic have to wait four more weeks for the fight of their lives.

Promoted by Top Rank, in association with Star Boxing, tickets priced at $100, $60, $40 and $25 (not including applicable fees) are on sale now and can be purchased by visiting www.ticketmaster.com and www.hardrockhotelatlanticcity.com.