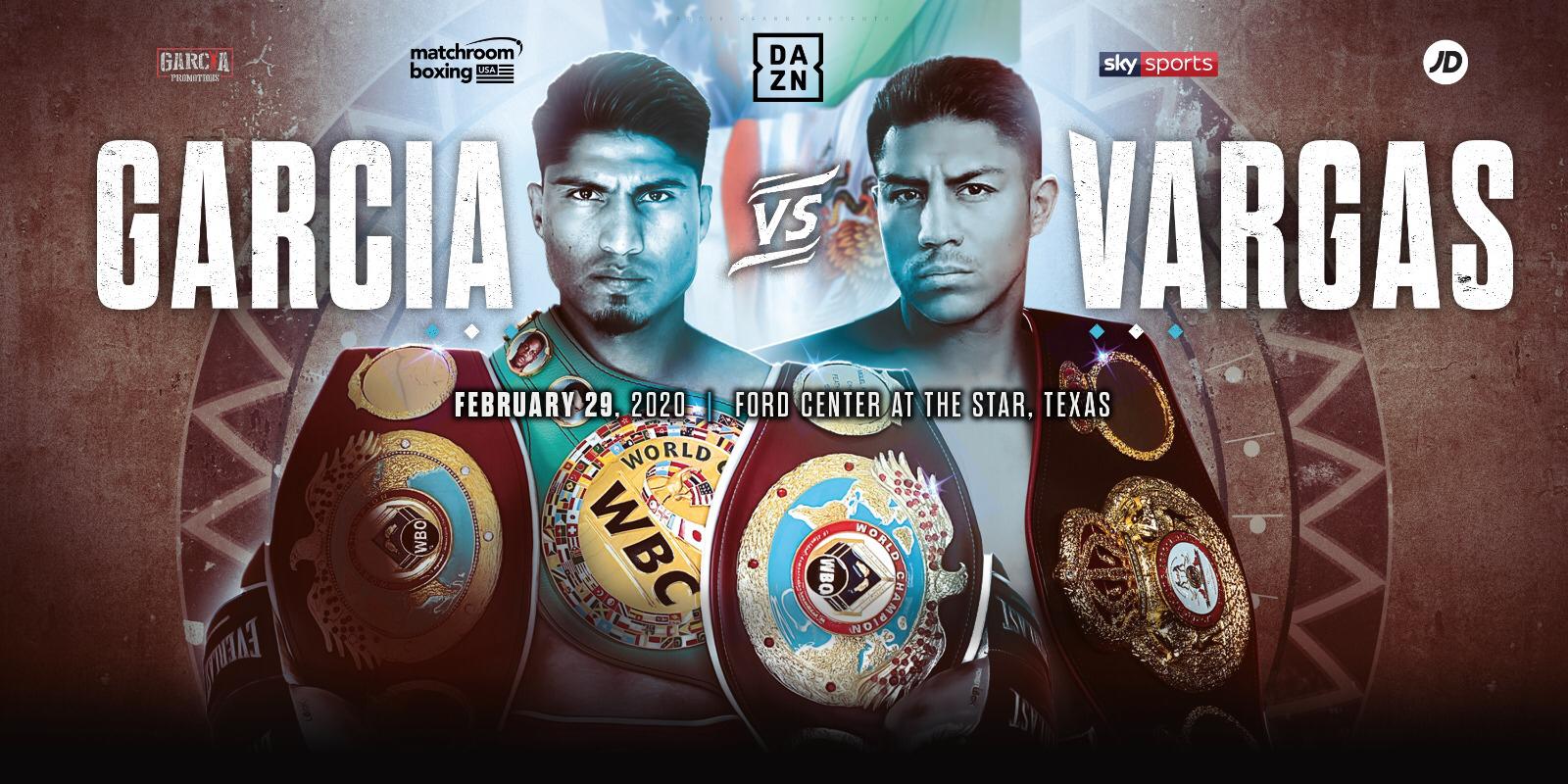 Mikey Garcia and Jessie Vargas will clash in a Welterweight blockbuster at Ford Center at the Star in Frisco, Texas on Saturday February 29 live on DAZN in the US and on Sky Sports in the UK.

Former four-weight king Garcia (39-1 30 KOs) makes his debut on DAZN with new promoter Eddie Hearn in the same state of his last outing at AT&T Stadium in Arlington in March in a bid to win World honors at a fifth weight.

Garcia, who turned 32 on Sunday, has now planted his flag in the ground at 147lbs by taking on Vargas, and the popular Californian will aim to make a big statement as he fights in Texas for the tenth time in an already glittering career.

“I’m very happy to announce my next fight against Jessie on February 29 in Texas, live on DAZN,” said Garcia. “I believe our styles are going to make for a great battle and the fans are going to be in for a real treat. Tune in and don’t miss it”

Former two-weight ruler Vargas (29-2-2 11 KOs) has already tasted glory at Welterweight and is gunning for more glory starting with his clash against Garcia.

Vargas was the first fighter to headline a Matchroom Boxing USA show in America in his entertaining draw with Thomas Dulorme in Chicago in October 2018 and followed that with a clinical KO win over Humberto Soto in Mexico in April. The 30 year old, who held the WBO strap at 147lbs in 2016 after moving up from Super-Lightweight where he held the WBA crown, believes that the timing is perfect for him to come out on top of what he promises will be a fan-friendly showdown.

“It’s a big fight for fight fans, it’s one people have wanted for a long time now,” said Vargas.  “We are giving them what they want to see, it’s going to be a great showdown.

“He’s a warrior and so am I, we both always go for the win and do anything possible to get it. I really believe in myself and my abilities, it’s one of the fights that will generate a lot of attention and it’s the perfect time to shine and show that I am here to stay – I need to show that I am going to be a World champion again and this is the perfect fight to show that.”

The huge showdown marks a return to Texas for Eddie Hearn’s Matchroom Boxing USA after staging on of the fights of the year in the unification sizzler between Maurice Hooker and Jose Ramirez in July, and the promoter is thrilled to be pitting Garcia and Vargas together in what promises to be an all-out war.

“Garcia vs. Vargas is a great fight and I’m so excited to bring this show to Frisco, Texas live on DAZN on February 29,” said Hearn. “The DAZN schedule is simply breathtaking and the value they are delivering to fight fans in quite incredible.

“This fight has all the makings of a Barrera v Morales type war where the styles should gel brilliantly for a real classic. I want to thank Jerry Jones and his team for his support for this great event, get ready for a huge fight and huge card at Ford Center in February!”

“It gives us great pride to host another superior boxing match of this caliber with Mikey Garcia and Jessie Vargas,” said Dallas Cowboys Owner, President and General Manager Jerry Jones. “Showcasing two of the best Welterweight boxing superstars, our fans and the entire North Texas region will get to experience another incredible event here at Ford Center.”

“We are excited to have the February 29 showdown between Mikey Garcia and Jessie Vargas serve as the official start to another Fight Season on DAZN in 2020,” said Joseph Markowski, DAZN EVP, North America. “Both men are multi-division champions who have proven their ability to draw an audience as incredible ambassadors for the sport. We anticipate a tremendous promotion with Mikey and Jessie before they meet in Texas.”

An announcement on ticket on-sale dates and prices will be made next week.