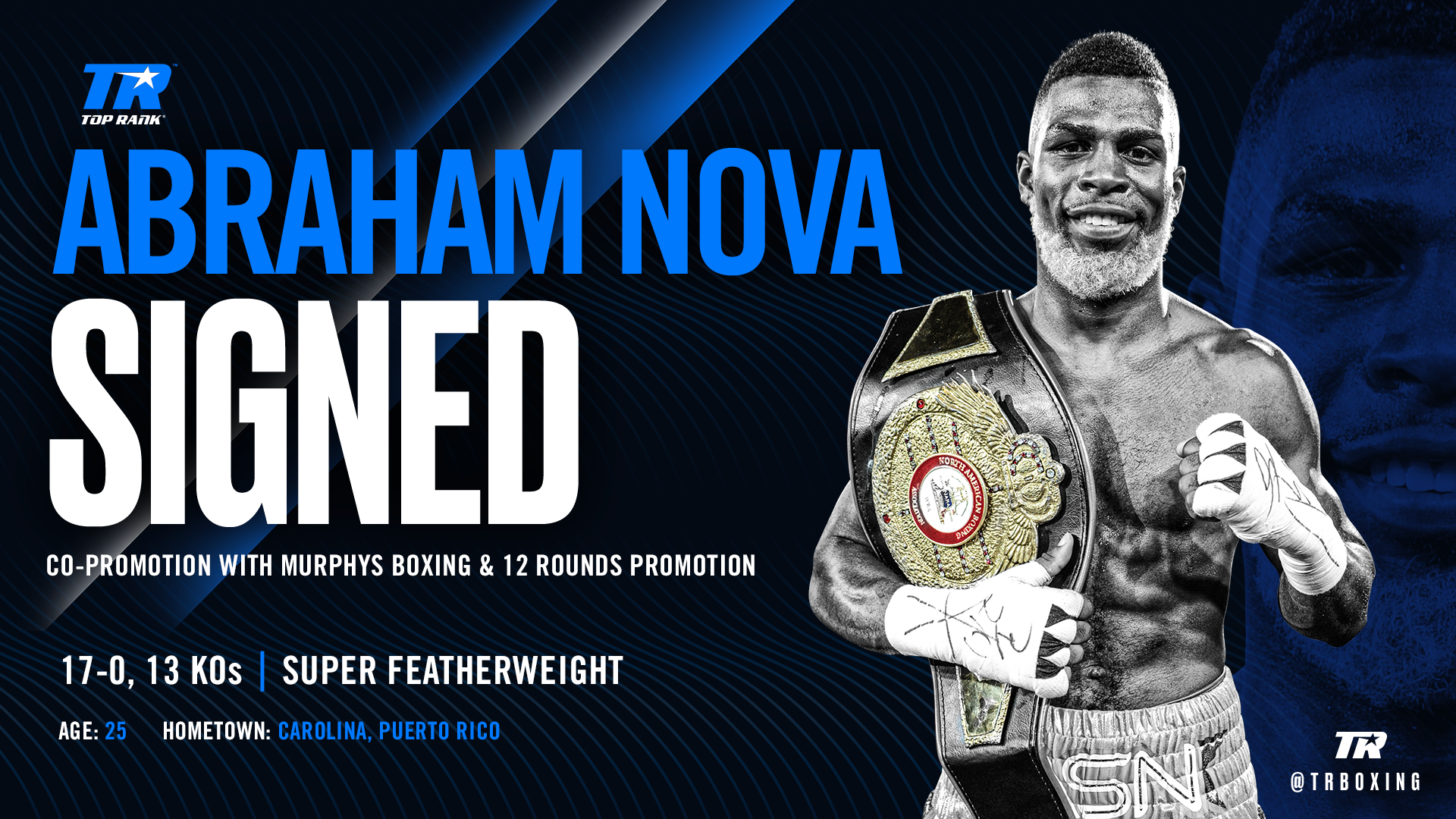 Nova’s first fight of the deal, which will see Top Rank serve as co-promoter along with Murphys Boxing and 12 Rounds Promotion, will be Saturday, Jan. 18 live on ESPN+.

“I’m excited that the world will see my talent on major platforms like ESPN and ESPN+,” Nova said. “It’s time for everyone to see what I am about. I want to fight for a world title soon, and I believe 2020 is the year I receive that opportunity. Top Rank has a lot of big names at 130, and I don’t duck or dodge anybody.”

“Abraham is an extraordinarily gifted young fighter who fits right into the mix at 130 pounds,” said Top Rank chairman Bob Arum. “He has talent, charisma and an engaging personality. 2020 is going to be a big year for the young man.”

“Abraham Nova is a very talented fighter with big knockout power. We’ve just begun to see how good he can be,” said Ken Casey, President/Founder, Murphys Boxing. “With Top Rank, we’ve found a great co-promoter to take Abraham to a world championship.”

The 25-year-old Nova (17-0, 13 KOs) was born in Carolina, Puerto Rico and moved to Albany, N.Y. with his family as an infant. One of 10 children born to an evangelical minister father, Nova started from humble beginnings, with his family of 12 squeezed into a two-bedroom apartment. He began boxing at the age of 12 and had nearly 200 amateur fights.

Nova turned pro in April 2016 and has had a well-traveled pro career, including five bouts in Belgium, where he has become a local favorite. He is ranked in the top 10 by two of the major sanctioning organizations and won all three of his 2019 bouts by KO, including a first-round stoppage over Luis Ronaldo Castillo in defense of his NABA super featherweight belt. He was one of Teofimo Lopez’s primary sparring partners as Lopez prepared for his Dec. 14 title-winning showdown against Richard Commey.

Nova, whose parents were born in the Dominican Republic, is fiercely proud of his Dominican and Puerto Rican heritage. His blond beard was inspired by the 2017 Puerto Rican World Baseball Classic team, who all dyed their hair blond as a show of team unity.

Said Nova: “When I fought with the beard, a lot of people remembered me. It became a cool marketing thing, but it started as an homage to Puerto Rico. I am proud to be Puerto Rican and Dominican, and I can’t wait to get started on the next chapter of my pro career.”